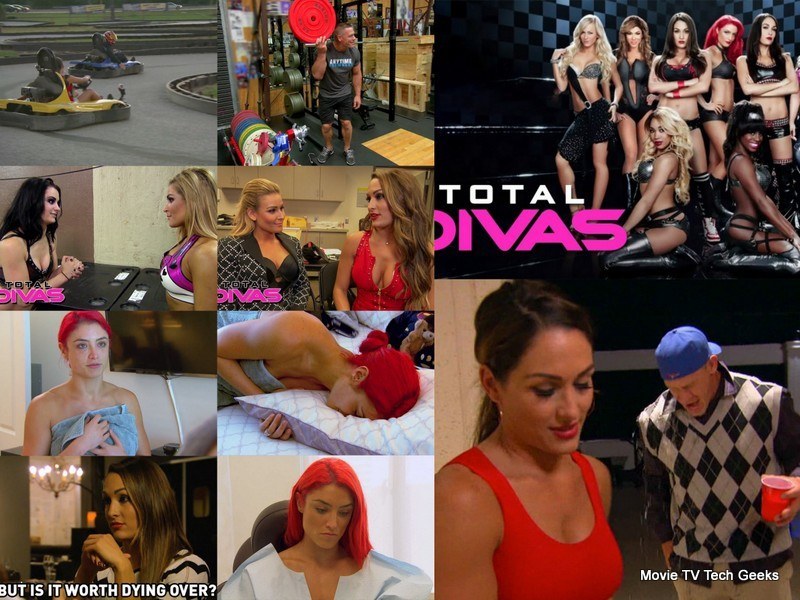 This week on Total Divas Natalya tried to convince the other divas that Summer Rae has a good heart even though viewers have seen the tension between the two. Paige said Summer Rae is her girl and she was the first diva Paige bonded with.

John Cena and Nikki went to the gym together and goofed off before getting down to business. Nikki then said she is faster than John, so he promptly challenged her to a race. According to Nikki, she and John enjoy competing against each other. She said that sometimes she feels overshadowed by John.

Meanwhile Eva Marie and Jonathan discussed that her breast implants were starting to make her physically uncomfortable. Jonathan said he felt lumps in her silicone breast implants. He then said that she needs to have a doctor examine her.

Backstage at Monday Night RAW Natalya confronted Paige about trying to kiss her. Natalya said Paige seems determined to do sexual things to her.

Eva Marie then went to a doctor to have her breast implants examined. The doctor determined there was a small leak in her implant. Both the doctor and Jonathan told her she wouldn’t/shouldn’t wrestle for two to three months after her breast implants are fixed. Eva Marie then said it is her decision what she does with her body and she didn’t appreciate Jonathan trying to tell her what to do.

Nikki said that when she told the other divas about the challenge she and John had dared each other to do that John was going to win. This made Nikki more determined to show everyone that she could win. The couple then went to the Grand Prix racetrack to start their competition. Nikki wanted to know if John would get her a trophy if she won. They then started the competition by racing GoKarts. The next competition was a game of mini golf. Nikki kept accusing John of cheating at both mini-golf and GoKarts. The couple then moved on to skee ball. Nikki said she felt John was goofing around too much and not taking their competition seriously.

Eva Marie and Jonathan then argued because she scheduled and then cancelled the surgery to fix her breast implants so she could keep working. Jonathan got made at her for not discussing it with him before she cancelled it.

At home Nikki and John were seen competing at beer pong. When he did better than her at it she walked away disgusted and said she wasn’t going to play anymore because John was still goofing off. Nikki then splashed a cup of beer in John’s face. He then asked her if she was alright and she said he turned their competition into a joke. He said the competition was never serious to being with. While this angered Nikki at first, she did end up apologizing for getting mad at him. She then admitted she took the fun out of the competition just to be able to prove something to herself. John then said that they should just be happy for each other.

Eva Marie then found out her boss at WWE got a phone call from Jonathan about her postponing her surgery. She stated that she was embarrassed and annoyed that Jonathan made the phone call without her knowledge. At home that night they argued about the situation and he accused her of acting like a child by postponing the surgery and that she needed to grow up. Jonathan stated that Eva Marie is saying her career is more important to her than her health. She then told Jonathan to f**k off and stormed out of the room.

Nikki and Brie went out to dinner with Eva Marie later on. Eva Marie talked to them about her career and brought up her health problems and admitted it was causing an issue for her. Brie and Nikki both told Eva Marie it is very dangerous to wrestle with a damaged breast implant. They also said that she was compromising the safety of the divas she works with in the ring. Brie then confessed that when she had to take time off for knee surgery she missed a lot of big career opportunities. Eva Marie pointed out that when Nikki came back after a five month absence the WWE gave her a big push with the fans.

Backstage at Smackdown Natalya and Paige met to talk about their upcoming match. Natalya told Paige to keep it G rated so that if Stephanie McMahon watched the match it would be one her young daughters could watch with her. Unfortunately that did not stop Paige from licking Natalya’s face during the match. Natalya said this made her feel disrespected and that she was aggravated and wasn’t going to allow this behavior to continue. After the match Natalya confronted Paige backstage over her face licking. Paige tried to convince Natalya doing such bold moves in the ring was an effective way to get the audience interested in the match.

Eva Marie finally agreed to have surgery where her implants would be replaced with implants made from materials safer for her. She said that WWE happily gave her time off for the surgery and recovery. After the surgery, Eva Marie and Jonathan checked into a nearby hotel because they live in L.A. and the surgery took place in Beverly Hills. She then said that the surgery had put everything into perspective for her and made her realize that without her health she can’t have a career.