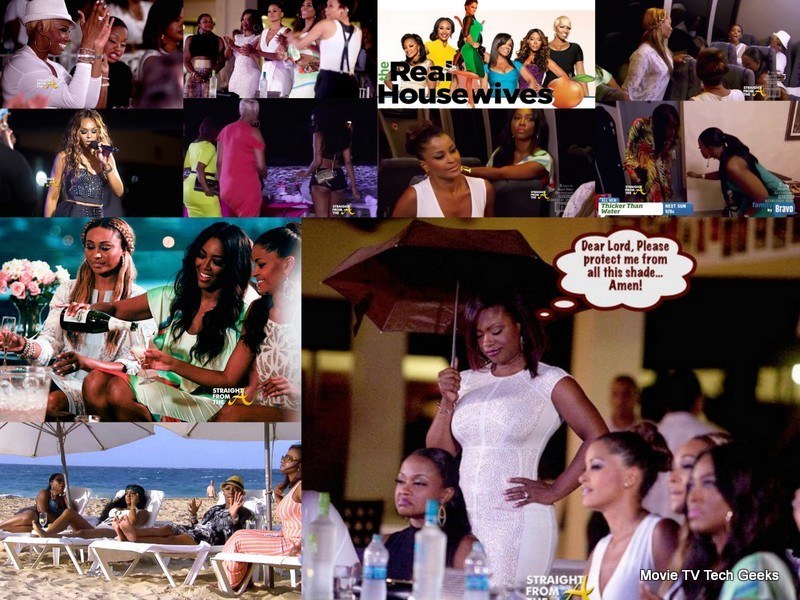 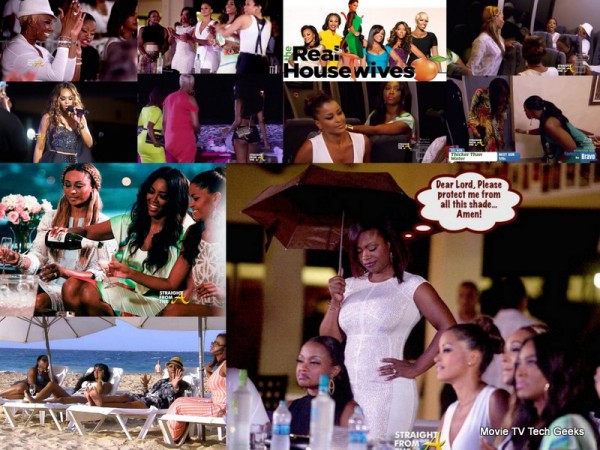 Here we are another week dealing with the Real Housewives of Atlanta’s (ROHA) antics. It is none stop with these women. They don’t hold back and always go for the jugular with each other.

Now as you read from my last recap, along with giving you a summary of each episode, I throw in my two cents because I want you to be aware (if you’re not already) of the fact that this shit is not real life. Please be able to separate the greedy, bougie sadiddy behavior that these women display from the way real, every day, sane, hardworking women should conduct themselves. And if you are one of those women who don’t see anything wrong with the way that the ROHA act because “hey, you gots to get yours” then please do us all a favor and go have several seats. 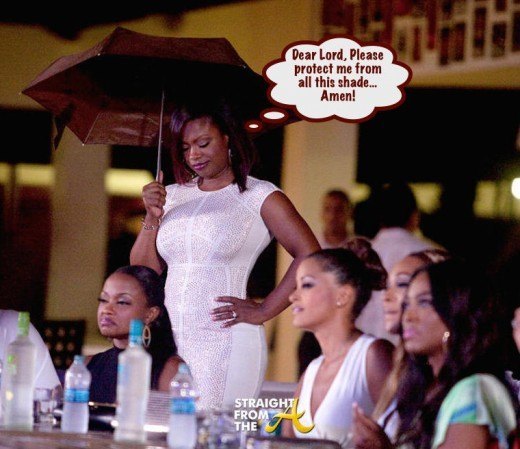 Okay let’s recap! So episode 11 of the seventh season picked up right where it left off. Claudia had just read the hell out of NeNe, who for a moment was speechless (yea, I know, I couldn’t believe it ether). After NeNe made the comment about Claudia’s clit no longer being on her body, what could Claudia really say? I mean how does one even respond to such stupidity and tackiness? Who talks like that? If this is what has gotten Ms. Leaks as far as she has come, then Lord, shame on all those people who didn’t tell her to shut her mouth in the past. That is not how a lady speaks to anyone, but then again, what more can you expect from women who gain or regain relevancy by doing a damn reality TV show? 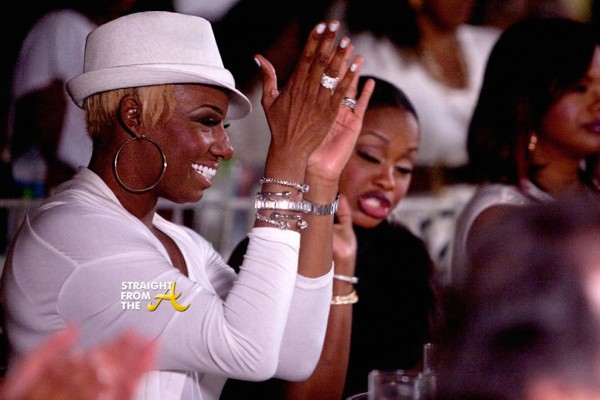 This scene right here is also a perfect example of how many black women can’t get their egos together enough to a) support another female and it be about her and b) get over the fact that they don’t have to be the center of attention all the damn time. All the ROHA do is tear each other down and try to get the upper hand. For what I don’t know. If each woman is doing her thing, why does there always have to be a fear of threat or competition. Idk, I guess that’s just how insecure bitches roll. 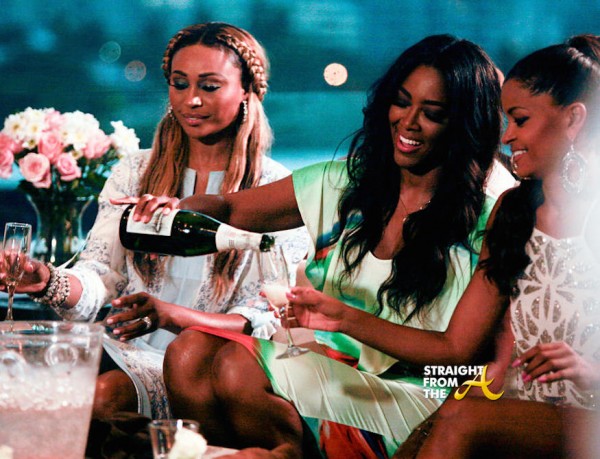 Anyway, Kenya and the crew, Claudia, Cynthia and Demetria, decide that they have had enough cat calling and naming dropping for the night and get up from the table to leave. Oh, but the shade throwing does not stop with their absence. NeNe, Porsha, and Phaedra continue talking about Claudia and the others. And it is no different for the ladies that left either. 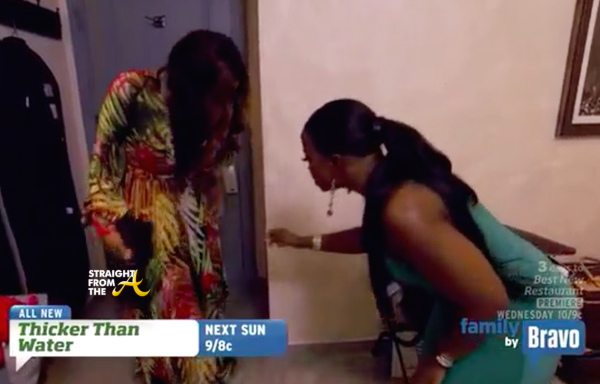 So while the feud between Claudia and NeNe is just getting started, with the new comer declaring, “I had to tell that raggedy ass bitch what time it was,” Demetria, once again, is being the bigger person and making the first step to clear the air with Phaedra. She goes to her room and apologizes for saying what she said about Phaedra’s marriage ending referring, to the Apollo Nida’s eight-year prison sentence. Of course with the Atlanta lawyer being who she is, she really didn’t apologize per se for her part of the debacle but instead told Demetria “I would prefer if you had come to me…and I would’ve told you I’m not tripping on you.” All in all, at the end of the scene, they squashed the beef and moved on. We’ll see how long that lasts.

It is interesting to me how one of the youngest cast members seems to be the one with the most class. I feel Demetria and I relate to her. I cannot tell you how many times I have wanted to slap a bitch but chose to talk it out instead. Has the other woman always accepted my olive branch? Hell no, but that is not my problem once I communicate how I feel.

Moving on, Kandi does another sex toy party as a redo for the one in Atlanta that didn’t go so well. She also takes this time to ask Porsha about her relationship with a wealthy married African businessman. Porsha, in not so many words, pretty much reveals that she is getting tired of his ass because “It’s just hard dealing with somebody out of town.” This type of nonchalant talk about the side chick getting tired of her married lover is another thing that is so wrong with this show. They throw around the fact that she is sleeping with a married man and taking extravagant gifts from him like it’s the norm, like we all do it and it’s not a big deal. Their telling of this story is gross misrepresentation of what it means to be in a relationship. 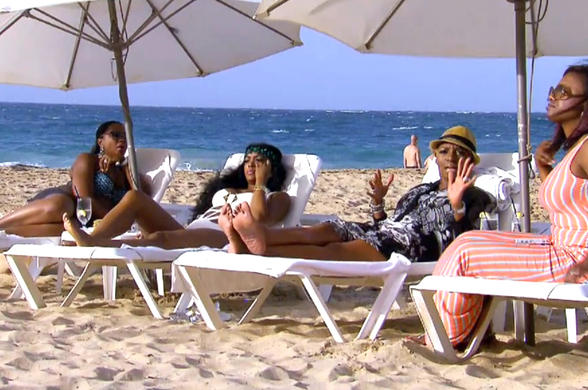 So at the party on the beach, the ladies play a game and to our surprise, they actually get along. I mean they are cordial and friendly and smiley. Who knew they could get through an event with it not being about who’s missing what sexual body part? 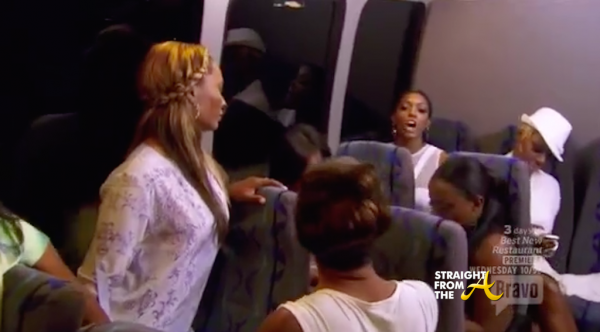 Finally, we get to the moment they’ve all been waiting for- Demetria’s performance. Both crews, minus Demetria of course, ride in a shuttle to the venue, but it is not without “conversation.” NeNe, who still seems to be stunned about Claudia calling out the fact that her NBC show The New Normal was cancelled, announces her run in Cinderella on Broadway and gives each Housewife two tickets. Awww how sweet of her. But the hugs and kisses only last for a moment because Nene and Claudia go at it again when they argue about “taking accolades away from each other.” 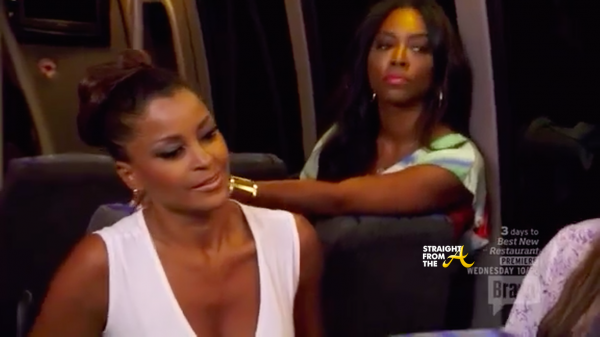 “I didn’t start with you,” Claudia reminds NeNe. “I will finish…I just hope that you can give me that same respect. I’m far from a whore.” 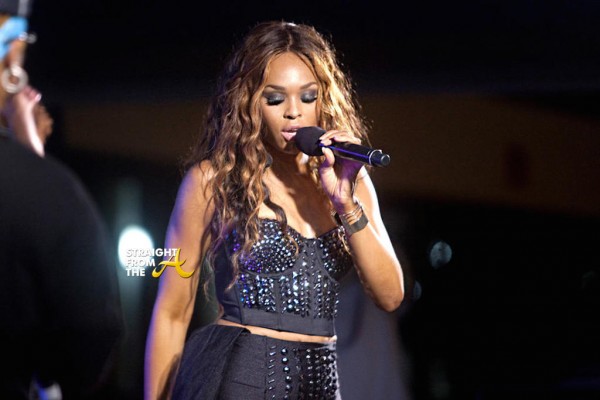 Then something happened that none of us knew was possible, NeNe Leaks apologized. Claudia and Porsha go it at about being phony and a hypocrite and Porsha told her she is a big “contradictory.” I’ll just let that soak in. Just remember, this is the one that thought the Underground Railroad was a real train station…Alas, they finally make it to Demetria’s performance… late! 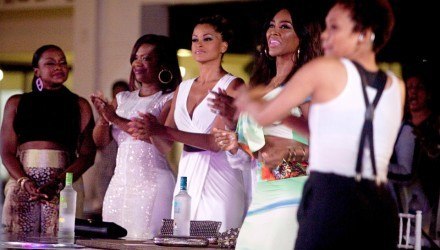 Everything is hunky dory for the time being but we all know that nothing on ROHA is what is seems so we’ll see what the deal is next week.