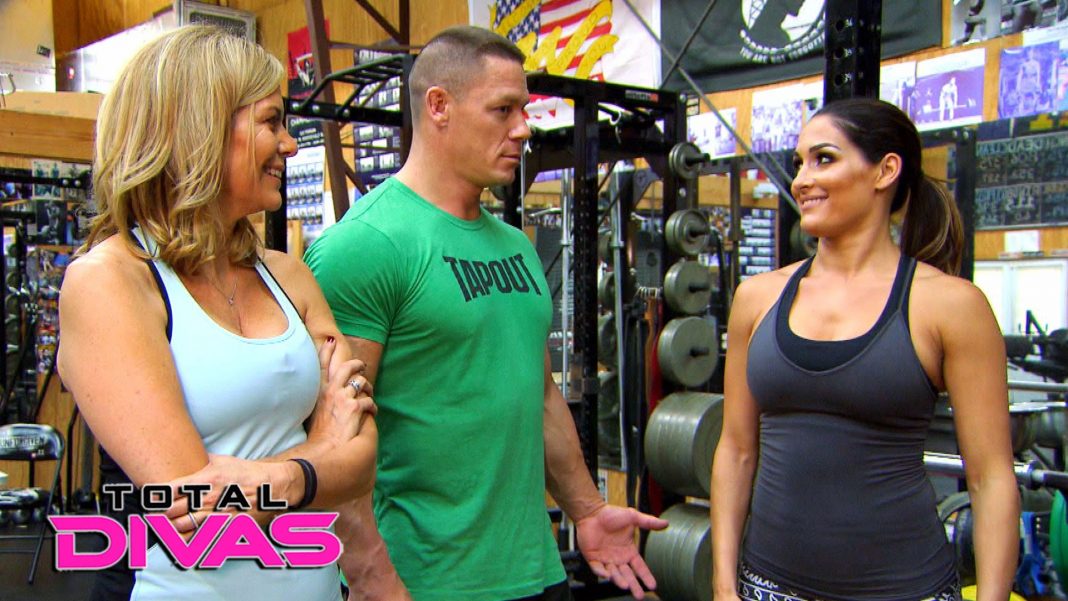 On this week’s episode of “Total Divas,” Brie talked to Renee Young about getting a scooter. Nikki said Brie couldn’t drive a scooter and that she would be terrified in traffic because she is not coordinated. Backstage at Main Event, Nattie commented that Rosa was on her third plate of food in an hour. Rosa said she had been dieting for nine years while working as a diva but didn’t have to worry about it anymore.

Paige said she was happy to be in every storyline and every pay-per-view, but her relationship with Kevin wasn’t going well. She said she just wanted to concentrate on work and her career right now.

Nikki told Renee she doesn’t want Brie driving a scooter. Nikki wanted Brie to hear a story about how Renee almost got wiped out driving a scooter on the highway. Nikki said she wasn’t controlling, but she was trying to protect her sister because she loves her. Brie finally said she wouldn’t get a scooter even she and Daniel Bryan wanted one as a second car.

Paige went grocery shopping with Kevin. He told her she was the worst person to grocery shop with. Paige’s mother was coming to town, and Kevin was going to cook her dinner. Paige picked her mother up at the airport. On the way home, Paige’s mom asked her where Kevin was, and Paige said he was at home. She called Kevin a decent guy. At home, Paige said her mom and Kevin are very close.

Brie took Renee shopping with her for a scooter. She said the more Nikki told her “no”, the more she would do what she wanted to do. Brie called the man she was looking to buy the scooter from. She also said that she was bringing her husband with her.

The snacks Rosa came home from the store with upset Bobby because he didn’t think she should be having them. He tried to take a piece of cake away from her, but she wouldn’t let him.

Paige went to a bar with her mom, and her mom said she thought Paige needed to eat something rather than just drinking. Paige said she felt awkward not telling her mom what was really going on between her and Kevin.

Brie, Daniel Bryan and Renee arrived to meet the man selling the scooter. Renee and Brie took it for a test drive. Daniel said they should negotiate with the man to buy one scooter rather than the pair of scooters he was selling. One of the scooters didn’t work, and Daniel said if he didn’t get it to work they wouldn’t buy either scooter.

Paige and her mom went out for lunch, and Paige jokingly told her mom she was going to put her in a home some day because she was so busy. Paige said she didn’t think she could tell her mom about the problems she was having with Kevin. Her mom said she thought Paige needed to address some issues. Paige left the restaurant and told her mom she embarrassed her. She then said she wanted to go home, and she didn’t need a lecture.

Brie was trying to text the owner of the scooter, and the man brought them both scooters. He also brought them fuel for free. Brie drove the scooter in their backyard and then she and Renee drove them to a restaurant to meet family for lunch.

Paige finally told her mom she was under a lot of pressure and missed just having fun. Paige’s mom said Kevin was an extra pair of eyes to make sure no one took advantage of her.

Eva Marie, Rosa and Jonathan had dinner with Mandy and her boyfriend Michael. Rosa said she was sacrificing her butt for her baby and that her new workout plan was her “bun in the oven” workout. She said Bobby was complaining that she was overeating, and she was angry with him because he put a camera in their kitchen. Eva Marie said she felt for Rosa because she has had body issues in the past too.

Brie, Nikki, Daniel, Brie and Nikki’s brother and his wife and Brie and Nikki’s mom met for lunch. Nikki was furious to see Brie and Renee show up on scooters. Nikki said Renee was becoming a bad influence on Brie. She said Nikki makes her feel insecure and always tries to make decisions for her.

Mandy went to Rosa’s house to help her get back at Bobby for putting a camera in the kitchen. Rosa admitted she was pranking Bobby. He said that he put on 20 pounds because Rosa kept buying sweets and that’s why he was mad at her. He said he felt like he had gained Rosa’s pregnancy weight.

Paige’s mom told her she just wanted to protect her and that she had hangups because of the way she lived her life and she wanted to avoid seeing the same thing happen to Paige. She finally confessed to her mom that there were issues in her relationship with Kevin.

Rosa and Bobby went to see her doctor for her 20-week visit. The doctor told them everything was good with the baby. He also told Rosa to avoid desserts the rest of her pregnancy.

Brie asked Nikki if she was going to ride the scooter with her and Nikki asked Daniel why he let Nikki get the scooter. Daniel told Nikki he thought she was a poor decision maker. Nikki insisted Brie could get killed on the scooter, but Daniel said she could just as easily be killed in a car.

Paige announced she and Kevin were officially over, and she was moving out of their place. She moved into her new house with the help of her friend Danielle, and Josh from WWE Tough Enough. Paige called Kevin, but he didn’t answer the phone at first. When he did answer she told him all her belongings were out of his place. Paige said the relationship ended better than she thought it would and she was going to focus on herself right now.