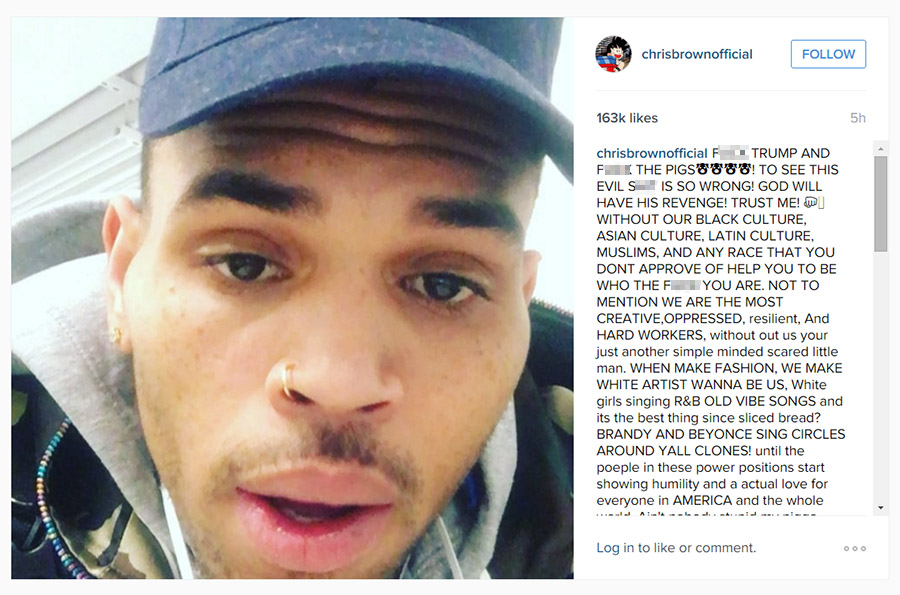 Chris Brown has his say on Donald Trump and may get the FBI coming to visit him now, Khloe Kardashian backtracks quickly on her sex comments regarding Ciara and Russell Wilson choosing to stay pure for their wedding. Kanye West naturally praised his wife Kim Kardashian for her Twitter beefs as he can see himself in her in more ways than one.

Chris Brown Has a Message for Trump, Tells Black People to Rally Together.

The singer has a message for Donald Trump and his supports.

“Fuck Trump and fuck the pigs.”

His comments come a day after the disturbing and racially charged video of a black protestor being assault by a Trump supporter as he was escorted out of a Fayetteville, NC rally. Oh and by the way, the assailant, 78-year-old John McGraw, who is an old white man, told Inside Edition,

“Next time we see him, we might have to kill him!”

The fuck? Chris Brown posted in his video on Instagram a message to black people everywhere.

What you need to start doing — all these black people, go together 40, 50 deep. See what they do then… Keep touching us, motherfucker… “God will have his revenge.”

Brown goes on to mention how People of Color play such a vital part in the success of this country and have done so for centuries.

“Without our black culture, Asian culture, Latin culture, Muslims and any race that you don’t approve of help you to be who the fuck you are… Not to mention we are the most creative, oppressed, resilient and hard workers, without us you’re just another simple minded scared little man.”

It’s no doubt that many people are upset about this situation, and all Trump can say is that his supporters respond this way because they are angry.

More entertainers need to speak up because this shit is out of control. 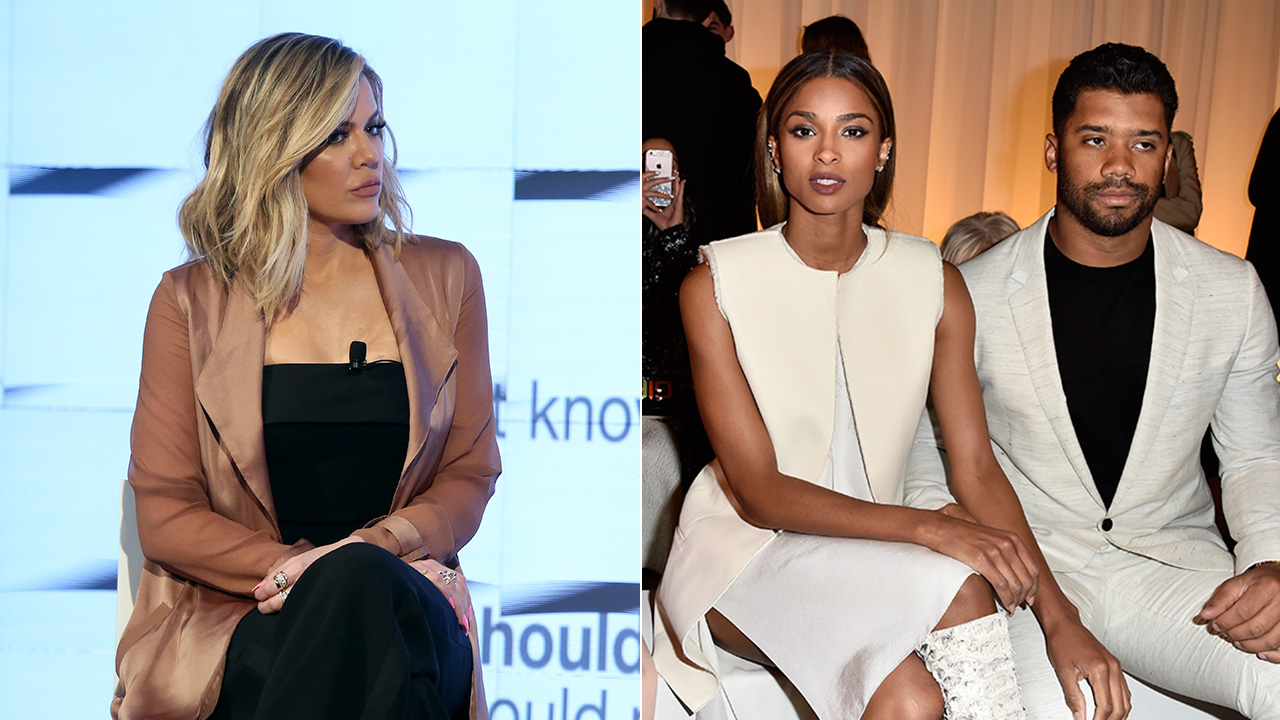 With the news of Ciara and Russell Wilson’s engagement, I can see why Khloe Kardashian would backtrack on her comments about their choice to remain celibate during their courtship.

During her “Kocktails with Khloe,” she pretty much said that Ciara and Russell are crazy for not having sex during their relationship.

“With all due respect to Ciara, she has a baby. It’s not like we don’t know if she is a virgin or not.”

She goes on to criticize them for even talking about their vow of celibacy.

“None of us would know about it unless they were publicly telling us they are practicing celibacy, so who are you trying to prove this to?”

Ugh, I just can’t. This comment is very telling as to how Khloe and the Kardashians roll. Chick, how can you not understand that their vow is inspiring to others and opens up the conversation about the different aspects of relationships, beyond the physical? If Khloe sees their celibacy in this light, then that brings into question if she understands that a relationship is more than just sex. People, of course, was not feeling what she said and rightfully so. Khloe then went on Twitter to backtrack on what she meant by her comments.

“I love & adore Ciara! I respect her on many levels. Was freely discussing my views on celibacy & people twist & turn everything 2create a feud.” “It’s so frustrating how people misconstrue my words!”

Klo, no one misconstrued your words boo. You are just being called out for the bullshit in even commenting in the tone you did in the first place.

I get how the media works, of course, her words are going to be twisted to mean something else, but that doesn’t take away from the fact that Khloe may need to go back to the drawing board when it comes to relationships.

Congrats to the two lovebirds by the way. I cannot wait to see the pictures from this wedding. 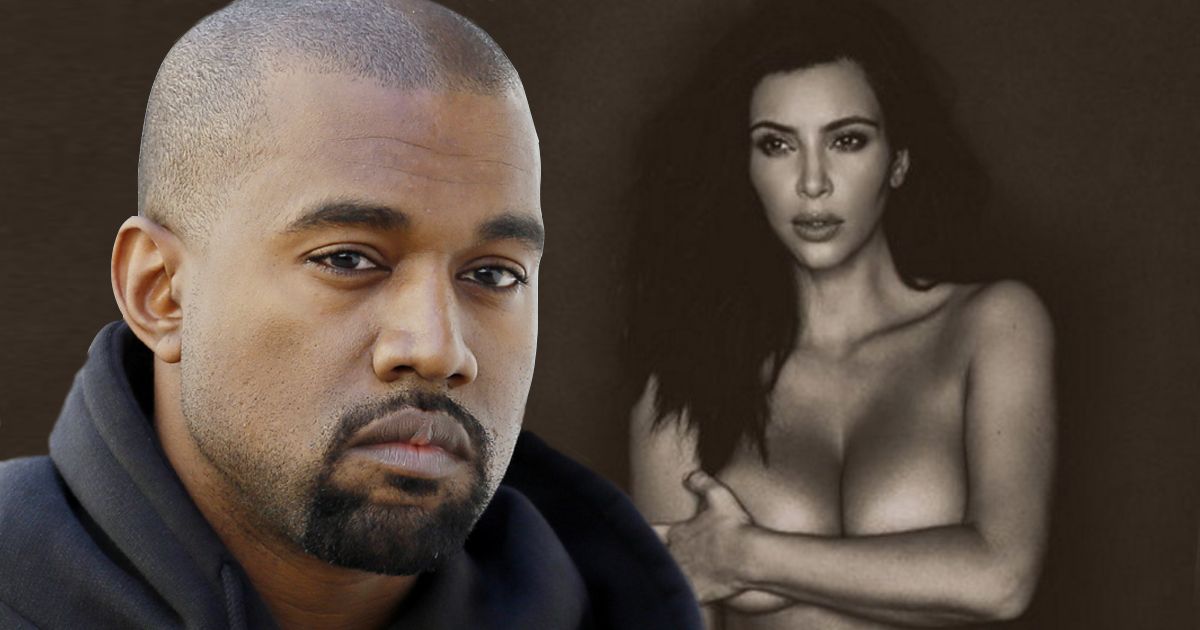 Every girl needs a man like Kanye West in her corner. Twitter beefs and God complex aside, this man rides for his wife. Even in the face of divorce rumors.

Ye recently went on yet another Twitter rant/tirade/storytelling and among the many things he mentioned, the thanked Balmain designer Olivier Rousteing for using his wife as the inspiration for his Fall 2016 collection.

“I thank Olivier for designing his collection around my wife… this is visionary as I believe that Kim is our modern day everything.”

Who doesn’t want a man that puts you on a pedestal for the whole world to view? Now if only he could be this charming the other 23 hours and 55 minutes of the day.