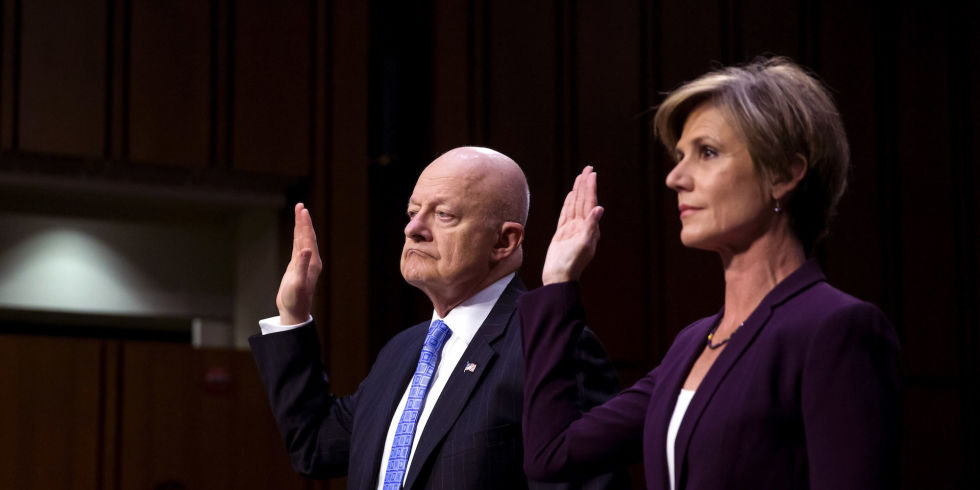 After one cancelled Congressional hearing, former acting attorney general Sally Yates was able to tell (sort of) her side on warning the White House about former National Security adviser Michael Flynn.

The hearing seemed to be about two things for two very different parties. The majority of Republicans asking questions were solely focused on leaks, unmasking and some very pointed attempts at smearing Yates reputation. Ted Cruz guaranteed himself plenty of press coverage for his rather heated attack with her in which he wound up with his tale between his legs skulking away with a simple “Thank you, Miss Yates.”

Democrats questions were focused on the Russia connection, and Sen. Al Franken (MN) had to point out how inept the White House looked bringing Yates back twice and still ignoring her words. Even former director of national intelligence James Clapper appeared frustrated when he pointed out that the Russia interference should be the biggest priority over leaks and unmasking.

The hearing did more to show America just who Sally Yates is and to leave a huge question mark hanging above the Donald Trump White House. Popular consensus after the hearing was that Yates was a true lifer in the government and actually didn’t care if you were a Democrat, Republican, Libertarian; if you broke the law, she was going to come after you.

The big question is why was she fired after delivering such important news to help the Trump Administration and then both fired and vilified by the White House just days later? The Democrats pushed hard on that fact to make sure that people watching realized something was definitely amiss in all this.

Both she and Clapper were able to fill in some major puzzle pieces that have been created by both the Russia investigations and the White House doing some very odd things.

At Tuesday press conference Sean Spicer danced harder than we’ve ever seen him trying to explain his February comments about Yates visit in which it sounded more like a friendly drop in instead of the urgent matter it actually was.

Here are the Top 5 moments from Sally Yates testimony that should give Donald Trump plenty of pause and make him realize that trying to demonize her on Twitter will quickly backfire as more facts come out. At this point, all of his Tweets are looking more and more like he’s trying to obstruct the Russia investigation and should be taken as so. Now that he’s pushing to send enough troops to Afghanistan for it to be a war mode should be watched closely. It’s the perfect distraction as the Russia investigation closes in even more after Tuesday’s hearing. 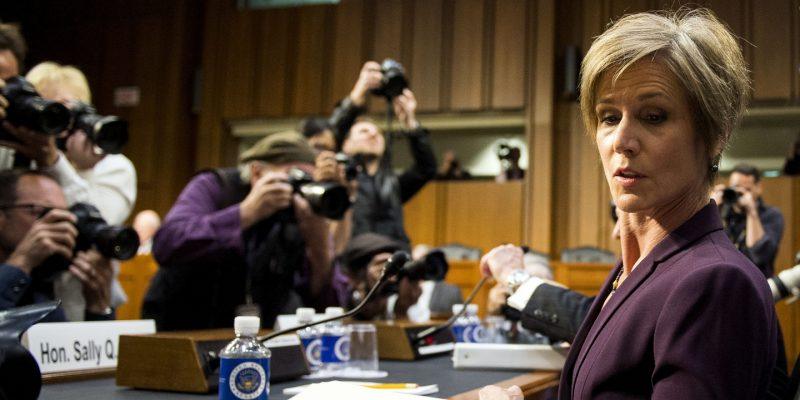 1. Yates delivered a forceful argument to the White House that then-national security adviser Michael Flynn could be blackmailed by the Russians

As soon as she read the details of Michael Flynn’s interview with the FBI, at the end of January, Yates called White House counsel Don McGahn and said they needed to talk in private, she testified.

Yates brought one of her top staffers with her on the afternoon of January 26 to meet with McGahn and one of his top aides inside a secure facility on the White House grounds so they could discuss the FBI’s interview of Flynn. It was then, she testified before senators Monday, that she warned McGahn that President Donald Trump’s national security adviser could easily become a blackmail target for Russians, based on the answers Flynn gave to the FBI.

“That created a compromised situation, a situation where the national security adviser essentially could be blackmailed by the Russians. Finally, we told them that we were giving them all of this information so that they could take action, the action that they deemed appropriate,” she said. McGahn called Yates and asked her to return the next morning, January 27, when she testified that he asked her about four main concerns:

Yates explained that any official publicly repeating the lie that Flynn had not discussed sanctions with Russian ambassador to the US, Sergey Kislyak, was increasing the chance Flynn would be blackmailed.

“Every time this lie was repeated, and the misrepresentations were getting more and more specific, as they were coming out, every time that happened, it increased the compromise and to state the obvious: You don’t want your national security adviser compromised with the Russians,” Yates said.

2. Trump is increasingly looking alone in his belief that Russia did not interfere to help him in the 2016 election

Trump has repeatedly called the investigations of possible coordination between his campaign aides and Russia “fake news” and, last week, said it may have been China that was behind the hacking.

“To me, the evidence was overwhelming, and very compelling, that the Russians did this,” Clapper testified when asked about Trump’s most recent assertions.

Then, prompted by Democratic Sen. Patrick Leahy, Clapper said Trump may still be helping the Russians by denying their involvement.

“You could rationalize that it helps the Russians by obfuscating who was actually responsible,” Clapper said.

3. Clapper and Yates undercut one of the Trump White House’s strongest arguments

Throughout the Russia probes, the Trump White House has pointed to testimony earlier this year from Clapper that he had seen no evidence in the January intelligence report of collusion between the President’s campaign and Russia. That was before FBI Director James Comey publicly revealed that the FBI was, in fact, investigating that question.

Clapper said Comey’s March 20 testimony was the first he heard of the FBI investigation. He later said that his original assessment was that there was no evidence he had seen worth including in the intelligence assessment — but Yates later said that she could not answer the question because she did not want to reveal any classified information.

The implication from both officials’ testimonies was that there may, indeed, be evidence of collusion — this after months of the White House arguing that Clapper was clear there is no evidence.

4. The Senate investigations have strong strains of partisanship

Monday’s hearing with Yates and Clapper was clearly focused on Russia’s interference in the 2016 election, but Republican and Democratic senators still used it to land some partisan shots.

Republican senators grilled Yates on why she refused to enforce the first executive order that imposed a travel ban issued by Trump.

“I don’t mean any disrespect: Who appointed you to the Supreme Court?” Sen. John Kennedy, a Louisiana Republican, told Yates in a comment that immediately lit up Twitter.

And Texas GOP Sen. Ted Cruz went to town on Yates, arguing that she may have broken the law by refusing to defend the order. She rebutted him by pointing to a later court ruling that supported her argument that she had a greater duty to protect against discrimination and uphold the Constitution.

Democrats, meanwhile, pushed hard with lines of attack clearly aimed at damaging Trump himself, not necessarily digging into what happened in the 2016 elections.

Connecticut Sen. Richard Blumenthal, one of the Senate’s most staunchly liberal members, took Yates on a winding line of questioning that ended with Trump possibly appearing on the witness stand in a hypothetical court trial against Flynn. At the end of the hypothetical exercise, Blumenthal pressed Yates if that was even remotely possible.

The Senate Russia investigators may have maintained the air of being the adults in Congress investigating Russia’s interference. But the Senate Judiciary Committee has proved over the last two hearings (including last week’s with Comey) that partisanship is still a powerful force in its own inquiry.

Yates was fired by Trump one day after it came out that she had refused to defend his travel ban and four days after she first alerted McGahn about Flynn. Meanwhile, it took 18 days for the White House to fire Flynn after Yates first told McGahn about his FBI interview.

“Without that published report, and without the free press telling us a lot of what went on, Michael Flynn might still be sitting in the White House as national security adviser,” said Blumenthal, referring to the original Washington Post report about Flynn’s phone calls with Kislyak.