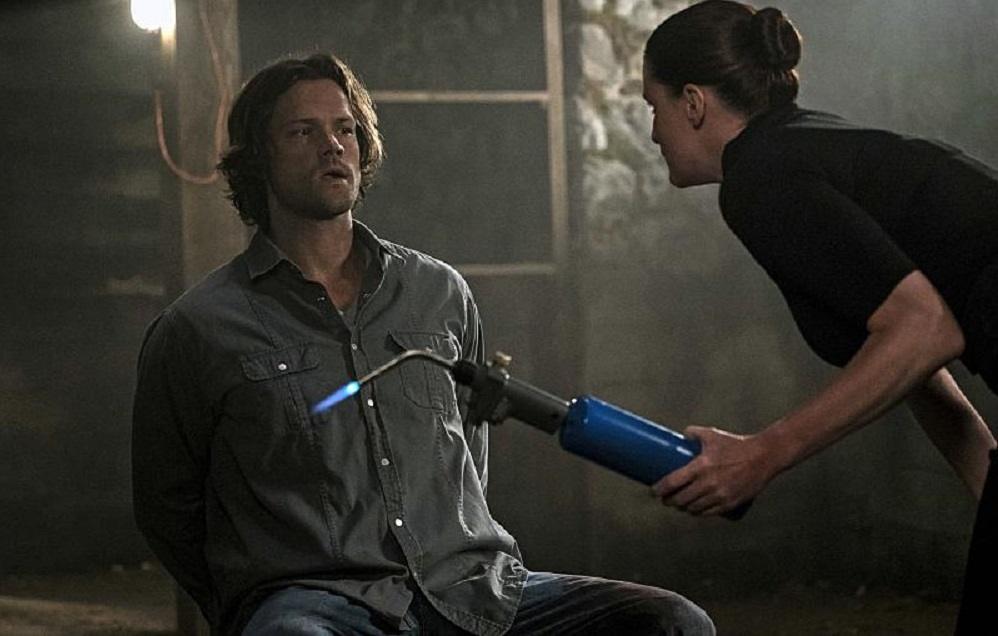 Supernatural Season 12 is off to an action and suspense-filled start. The episode title, ‘Keep Calm and Carry On’ is suitable given its British flavor as a reference to the ‘Keep Calm’ memes that pervade the internet. The show picks up right where it left off in the Season 11 finale. Mary Winchester is back, apparently with memories from the moment she died. We also immediately pick up with Sam being kidnapped and tortured by some women of letters as shown in the trailers. Given the situations, there’s not much humor in this episode. What we have here is an episode with much anxiety and suspense.

Honestly, while I liked the episode as we’ve been waiting for it since the end of Season 11, it didn’t feel that great, as I was really hoping for Sam’s immediate rescue. It didn’t feel complete. It remains consistent that after the previous season’s cliffhanger, that cliffhanger gets resolved in the next season’s first two episodes. The second episode can’t come soon enough which will give this viewer a sense of closure, for the lack of a better word. But if the show was setting up viewers to want more, it worked. We want the next episode!

That’s basically the review or half of it, so if you haven’t watched the episode yet, stop here now. Spoilers ahead.

You’ve been warned. So first, we pick up where we left off in some park where Mary Winchester meets her son Dean. Mary is in her nightgown and is apparently at the state before she died at the hands of Azazel. Dean tries to touch her, but her fighting instincts kick in, and she pins Dean to the ground. The two get acquainted with Dean telling her things that she’d only know to make sure he’s who he says he is. Dean apparently puts two and two together that having his mom back is his reward from Amara.

We switch over to Castiel, and we see first time what happens to an angel after they’re banished with the hand sigil. He crashes like a meteorite about 3 hours away from the bunker and hijacks a pickup truck from its bewildered owner. The sigil also seems to de-power angels since Cass needed the truck to get back. Dean and Mary talk in the park until morning with Dean giving her the rundown of events since she died. John’s death, the Apocalypse, Amara but not everything. We then switch later to Antonia’s team looking for the first doctor they could find who happens to be a vet to fix Sam’s bullet wound. As shown in the trailers, Sam’s tied up in a van. We then see Crowley trailing two demons cleaning up bodies of what looks like angel victims whose eyes are burnt out. The next scene has Sam in a basement tied to a chair as shown in the trailers. This is where Toni and her female teammate begin to interrogate Sam. Sam is, of course, uncooperative after the treatment he received from Toni and refused to answer any of Toni’s questions. He tells them that he’s been to hell and back and that no form of physical torture they give will make him give in.

Dean and Mary arrive at the bunker and see Sam’s blood from his encounter with Antonia. Castiel arrives and is happy that Dean is still alive after he and Sam presume Dean to have died using the soul bomb against Amara. Castiel explains what happened. Pleasantries are put on hold as they quickly begin the search for Sam. We see the cute happy little trailer event where Mary gets reacquainted with Baby. It’s quite reasonable since Baby reminds her so much of John.

We then switch back to Sam where he still refuses to give Antonia what she wants, which is the list of names and locations of American hunters so she can run a coordinated monster hunting program like the Men of Letters did in Britain. Sam continues to refuse so they use a blowtorch to break him.

We switch back to Crowley as he tries to convince two demons to join his team to which they quickly say no and mock him. So what does a good demon do after that? Crowley realizes that Lucifer is shopping for an appropriate vessel which resulted in the death of a family except for one member. We switch back to Dean and the gang where they interrogate the driver who drove Antonia. We quickly switch back to the Women of Letters where they show their frustration and disbelief at Sam’s resilience to the blowtorch Antonia then injects Sam with some sort of serum to chemically break his mind.

We switch back to Mary where she tries to come to terms with how much change has happened since she died and see families engaged in their gadgets, marveling at the technology after she saw Dean use a laptop in the bunker to find the vehicle Toni used. They then interview the vet that treated Sam and Dean gets to speak with Toni for the first time and threatens her. Because of whatever drug Toni used, Sam gets hallucinations that seek to fuel Sam’s guilt over the people who died in his life.

While on route, the Impala gets rammed from the read side by Toni’s lady companion and Mary gets knocked out. Dean and Cass get their asses handed to them. They’re about to get killed until Mary stabs the woman from behind with Cass’ angel blade. While in the basement, Sam manages to outsmart Toni by pretending to slit his throat. He almost captures the woman but ultimately fails.

Mary, fresh from her first kill after her comeback laments about everything that happened, that her sons became hunters despite her effort to escape the hunter lifestyle. Crowley finds out that Lucifer failed in his recent body quest and that after getting almost killed by Sam, we see Toni apparently shaken by the experience while Sam remains in the basement looking hopeless.

So this episode is a good start for Season 12. We don’t see Rick Springfield nor Castiel’s quest to find Lucifer yet, but that could be the climax of the next episode along with Sam meeting his mother for the first time. Supernatural really left the fans wanting more this time. Really wish they kickstarted the season with something longer.

As for the characters, Sam and Dean remain pretty much like they are. As for Mary, we expect great things from her as she can quickly adapt to danger and we see hints of some humor in her as well as some conflict. She obviously has trouble adapting to the era and that’s not the half of it as she still has to adapt to Dean and later to Sam. As for Castiel, he seemed a bit too de-powered which may fit with the plot since he could easily resolve the whole situation at full power. But after the events of Season 11, he should have been as a parting gift from God.

Again, I’m still wrestling with his seeming indifference to God in the last episode after Amara pulled Lucifer out of him. Lastly, about Crowley, his scenes seemed to belong to a separate episode altogether, but they’re essential here as they show Lucifer’s quest for a new vessel. We do need to know what was supposed to have been the greatest evil on earth, is up to after season 11. So that’s it. Hope you enjoyed the first episode as much or even more than I did.