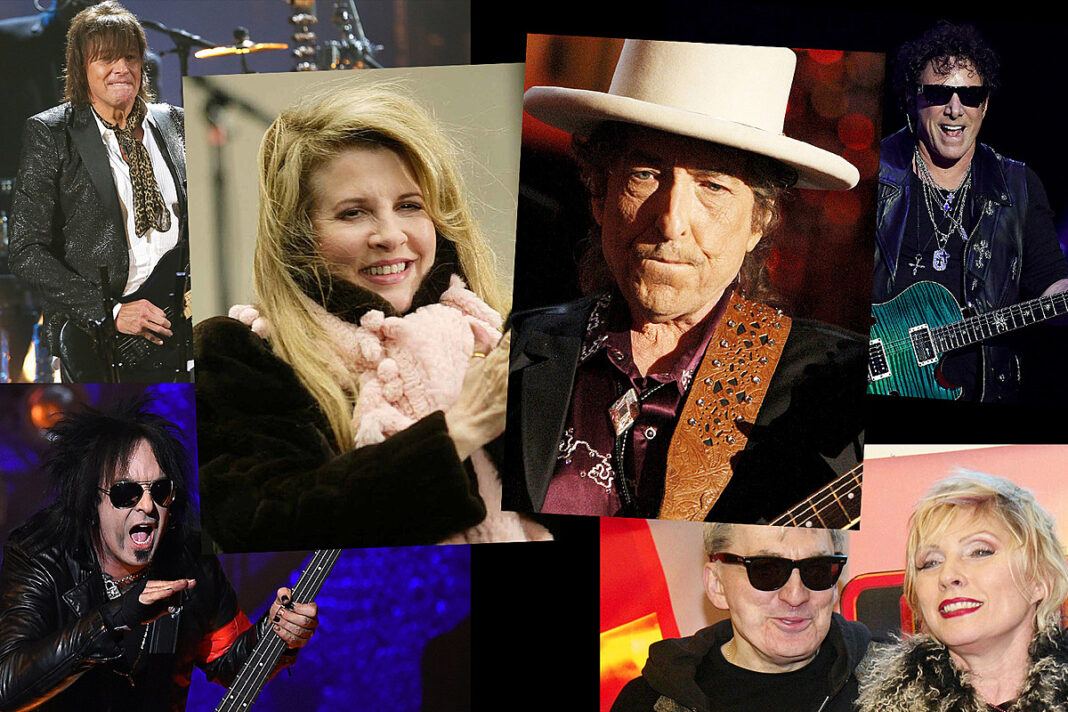 One after another, veteran singer/songwriters are suddenly selling off their music catalogs which is shocking some fans. It’s also a reminder that many of them won’t be around with us much longer, and they are planning ahead for that time. Longtime fans are getting nervous, as it’s reminding them that their favorite rockers won’t be around forever.

When Prince suddenly died in 2016, it became quickly apparent why wills are very important. Especially when you have quite a few assets that family members are bound to fight over.

Stevie Nicks seems to have gotten the ball rolling this week when she sold an 80 percent interest in her music catalog to Primary Wave for $100 million. Her timing couldn’t have been more perfect as her 1970’s hit ‘Dreams’ slid back onto the Billboard Charts in Octobers after skateboarder Nathan Apodaca used it as background music for his TikTok video that went viral.

In another TikToc, Nicks herself pops up singing the song while lacing up a pair of roller skates. To top it off, Fleetwood Mac drummer, Mick Fleetwood, joined in making his own version of Apodaca’s video. TikTok smartly rolled all this into a commercial, jacking up the price for Nicks’ catalog. That’s what you call true corporate ‘synergy.’

For his longtime fans, Bob Dylan’s songbook is priceless. Well, like many, he’s put a price on it.

The Nobel Prize-winning songwriter has sold publishing rights to his catalog of more than 600 songs, one of the greatest treasures in popular music, to the Universal Music Publishing Group, it was announced on Monday.

His collection includes modern standards like “Blowin’ in the Wind,” “Tangled Up in Blue” and “Like a Rolling Stone” through to this year’s 17-minute opus on the Kennedy assassination, “Murder Most Foul.” The body of work may only be matched for its breadth and influence by the Beatles, whose songs were re-acquired by Paul McCartney in 2017.

The price was not disclosed, but industry experts have suggested the sale is in the range of $300 million to a half-billion dollars.

The sale gives Universal the right, in perpetuity, to lease use of Dylan’s compositions to advertisers and movie, television or video game producers, or anyone who thinks his words and melodies could enhance their product.

Dylan’s team cautioned anyone against thinking this is a sign that the 79-year-old music legend is checking out. Rather, it seems like he’s taking advantage of a favorable business climate to find a comfortable home for his life’s work.

“It has been 60 years and it’s still going strong,” DeCurtis said. “There’s no reason to believe there’s going to be any diminishment in its significance.”

Dylan topped the Rolling Stone list of the 100 Greatest Songwriters of All Time in 2015 and “Like A Rolling Stone” was named by the magazine as the best song ever written. He won the Nobel Prize for Literature in 2016, the only songwriter to receive the award.

Until Dylan and the Beatles, it was considered unusual for popular music songwriters to perform their own work. In an illustration of his lasting influence, 38-year-old Nashville-based singer Emma Swift is releasing a collection of Dylan covers this week, “Blonde on the Tracks.” The title is a nod to the classic Dylan albums “Blonde on Blonde” and “Blood on the Tracks.”

Dylan’s songs have been recorded more than 6,000 times, by artists from dozens of countries, cultures and music genres. Notable releases include the Byrds’ chart-topping version of “Mr. Tambourine Man,” Jimi Hendrix’s reworking of “All Along the Watchtower” and Adele’s cover of “Make You Feel My Love.”

Events have conspired to make song publishing a more valuable asset. Interest rates are favorable for companies looking to invest, and songs are seen as a reliable source of long-term income in an industry where streaming has taken control and the live concert business has at least temporarily collapsed due to the coronavirus pandemic, said Alan Light, a veteran music writer and host of his own SiriusXM show.

Given the pace of change in the industry, “songs seem to be the place to place your bets,” Light said.

New publishing and talent management companies like Primary Wave and Merck Mercuriadis’ Hipgnosis Song Fund have spring up to compete with long-time players in the industry like Universal and Sony. Stevie Nicks recently sold an 80% stake in her music to Primary Wave for a reported $100 million.

Despite the sale, Dylan does not lose total control over his work, a longtime fear of many musicians. The Universal deal does not include rights to Dylan’s own recordings of his material, so if Universal is approached to use Dylan’s recording of “Lay Lady Lay,” for example, that would have to be cleared by the artist.

Even in cases where Universal has control, the company is unlikely to risk doing something where Dylan would publicly object to how his work is being used. He’s never been a purist when it comes to commercial possibilities, having recorded ads for Victoria’s Secret and Cadillac.

Dylan’s songs, however, will long outlive him.

“It’s the kind of thing, if you want it done right, you want to take care of it yourself while you’re still at a stage in your life when you can do it right,” said Robert Levine, Billboard’s industry editorial director.

Dylan has performed regularly even as he’s aged, so much so that fans have joked he’s been on the “Never-Ending Tour” since the late 1980s. Only the pandemic has grounded him. He continues to record, with this year’s disc, “Rough and Rowdy Ways,” being well-received critically.

Judging from a tweet by David Crosby on Monday, other veteran musicians may be looking for their own deals. Crosby said he’s selling his catalog, too, noting that he can’t work because of the pandemic and that streaming has cut off record sales as a source of income.

“I have a family and a mortgage and I have to take care of them so it’s my only option,” Crosby said. “I’m sure the others feel the same.”