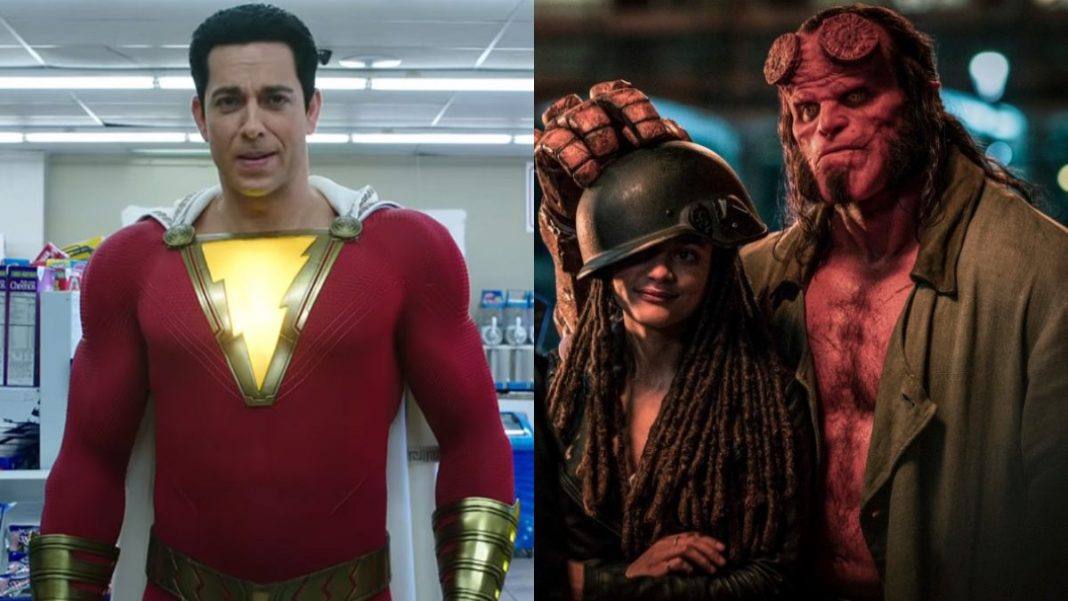 It was the tale of two superheroes, “Shazam!” and “Hellboy;” both lighthearted but each took very different paths at the box office this weekend.

A rush of newcomers couldn’t shake “Shazam!” from the top spot, as the superhero comedy led the box office for the second straight weekend with $25.1 million in ticket sales, according to studio estimates Sunday.

Lionsgate’s “Hellboy” reboot, the animated Laika Studios release “Missing Link,” the college romance “After” and even the long-delayed “Mary Magdalene,” originally to be released by the Weinstein Co., all opened in theaters. But the strongest new release of them all was, predictably, the Will Packer-produced one: “Little.”

The body-swap comedy “Little” came in second with $15.5 million for Universal Pictures. Made for just $20 million, “Little” is just the most recent profit-maker for Packer, the “Girls Trip” producer.

The film, directed by Tina Gordon Chism, stars 14-year-old Marsai Martin as the child an abusive tech executive (Regina Hall) reverts to after a magical spell is cast on her. Martin, the “black-ish” star, also executive produced the film, the youngest ever so credited in Hollywood history. It’s like “Shazam!” in reverse.

“He’s done it with different kinds of films. ‘Breaking In’ was a thriller, ‘Girls Trip’ was an R-rated comedy. ‘Little’ is kind of an all-ages film, PG-13 rated,’” said Orr, whose studio signed a first-look deal with Packer in 2013. “He’s a brand. And he has a great idea of what is going to be successful at the box office.”

It was an out-of-body weekend at the box office. The body-swap comic-book adaptation “Shazam!” — about a teenage boy (Asher Angel) who can turn into an adult-sized superhero (Zachary Levi) with a simple command — held solidly in its second week. Capitalizing on good reviews and word-of-mouth, “Shazam!” is Warner Bros.′ New Line’s latest DC Comics success. It has grossed $94.9 million through Sunday with a worldwide total of $258.8 million.

Lionsgate and Millennium’s “Hellboy” had been expected by many to vie with “Shazam!” on the weekend. But on the heels of terrible reviews (just 15% “fresh” on Rotten Tomatoes), it flopped with $12 million against a $50 million budget. It proved that a mix of wisecracks and superpowers were not a guarantee of success. Plus the absence of Guillermo del Toro and Ron Perlman, more than likely resulted in the less than stellar results.

Males accounted for 56% of opening weekend crowds for “Hellboy,” while 64% of moviegoers were over the age of 25. Lionsgate acquired U.S. and U.K. rights to “Hellboy” from Millennium Media, which financed the film. Guillermo del Toro, who directed the original two “Hellboy” movies starring Ron Perlman, was not involved with the most recent adaptation.

“Missing Link” also missed. It opened with a disappointing $5.8 million, marking a new low for Laika, the maker of eccentric animated tales such as “Coraline,” ″ParaNorman” and “Kubo and the Two Strings.” ″Missing Link,” distributed by United Artists Releasing, is about the discovery of a creature in the Pacific Northwest. Its voice cast includes Zach Galifianakis, Hugh Jackman and Zoe Saldana.

Expectations had varied widely for Aviron Pictures’ “After,” an adaption of Anna Todd’s 2014 best-seller. The young-adult drama fared well with $6.2 million in 2,138 theatres.

And “Mary Magdalene,” starring Rooney Mara as Mary and Joaquin Phoenix as Jesus, finally opened, more than three years after production. Harvey Weinstein had once conceived of the film, directed by Garth Davis (“Lion”) as his next Oscar contender.

After the fallout of Weinstein and the bankruptcy of the Weinstein Co., IFC Films acquired the biblical biopic. Critics dismissed it (44% fresh on Rotten Tomatoes) and audiences mostly did, too. It grossed about $62,000 on 62 screens.

“Bohemian Rhapsody” is the champion that keeps on giving five months after first hitting theaters. In February, China cleared the landing for it to hit theaters there much to the studios surprise.

The Queen biopic cleared the $900 million mark at the worldwide box office over the April 12-14 weekend to become the No. 4 title of all time for 20th Century Fox, not adjusted for inflation.

Through Sunday, the award-winning film has earned $216.2 million in North America and $685.2 million overseas, where a late run in China ($13.9 million) pushed its worldwide total past $900 million. It also continues to play in Japan, where it has earned a stellar $115.9 million to date

“Bohemian Rhapsody,” which first hit theaters in early November, had already become the top-earning music biopic of all time before achieving its latest milestone. And it had already defied expectations in even crossing $800 million.

“Bohemian Rhapsody” won four Academy Awards, including a best actor win for Malek. And at the Golden Globes, it won for best drama and best actor in a drama.