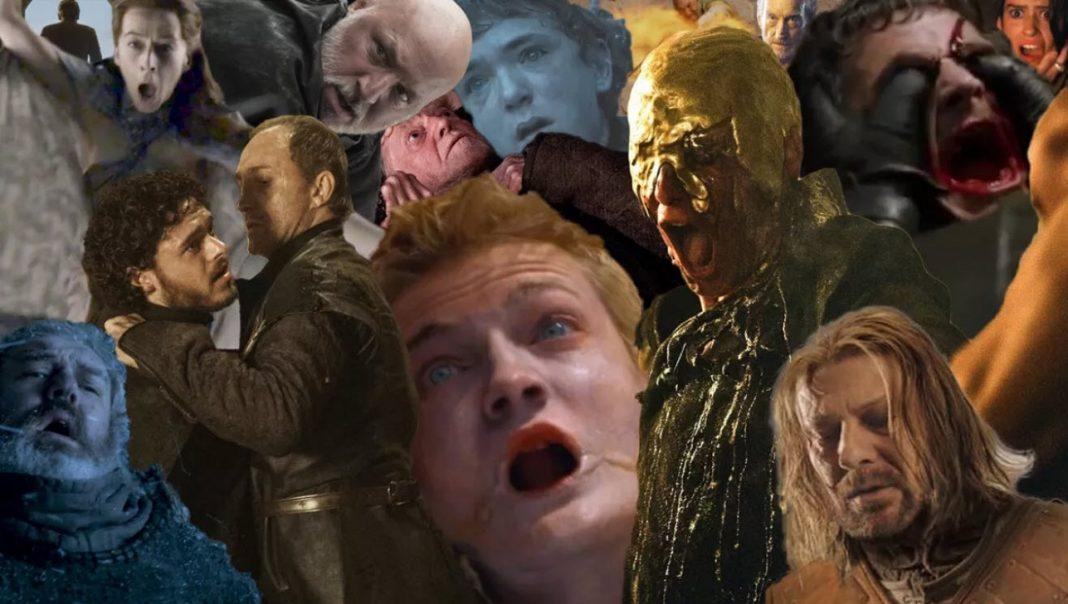 HBO’s mega-hit “Game of Thrones” had its final season premiere at Radio City Music Hall on April 3, and we were able to talk to the stars about their favorite scenes that made many of us squirm, look away, but then watch again. Yes, those death scenes that GOT was famous for.

“Game of Thrones” has shocked and pleased viewers with the way they have killed off its characters — from the jaw-dropping “Red Wedding” episode to the explosive green wildfire that eliminated most of the cast, which then led to the epic way Tommen Baratheon essentially said, “You know what everyone, I’m over this,” and took a dive from a high window, killing himself.

Some of the show’s top stars, including Sophie Turner (Sansa Stark), Maisie Williams (Arya Stark) and Kristian Nairn (Hodor) talk about their favorite death scenes in interviews with media outlets. “Game of Thrones” premieres its eighth and final season Sunday on HBO.

Defending Tyrion Lannister, Oberyn Martell battles the giant known as Ser Gregor Clegane and nearly kills him, but Martell (Pedro Pascal) proved to be too cocky and celebrated too early. Clegane then crushed Martell’s skull and the scene became one of the show’s most memorable. It was so popular that Pascal said when he meets fans, they will imitate how Clegane gouged his character’s eyes before his head exploded.

— Turner: “The skull crushing — that was pretty spectacular.”

— Williams: “When Oberyn Martell got his head squished …. loved that scene. So sad, though, because I miss Pedro.”

— Isaac Hempstead Wright (Bran Stark): “It was so, so shocking. Not only in terms of the brutality of it, but because I didn’t see it coming. I hadn’t read the script for the episode. It was one of those classic ‘Game of Thrones’ where you think the underdog’s winning. Oh, no, no, no. He’s (got) his head squished.”

— Eugene Simon (Lancel Lannister): “Just as things are about to turn around, you’re suddenly blown to pieces and you’re a goner. It’s just unbelievable. I could not believe it. I was utterly shocked. It happened so quickly as well. His skull just gets crushed and he’s done.”

NED GETS SOME HEAD

“Game of Thrones” proved no character was safe from being killed off when Ned Stark, played by Sean Bean, died in season one when his head was chopped off, orchestrated by Joffrey Baratheon.

— Turner: “Sean’s was amazing because it was just so shocking — because no one knew that they were going to kill off main characters.”

— Conleth Hill (Varys): “Even while we were filming I kept thinking, ‘Oh someone will save him.’”

One of the most uncomfortable ways to die? On the toilet. Hit with three arrows. By your own son. That’s what happened to Tywin Lannister (Charles Dance) when Tyrion Lannister went full blown savage on his dad.

Gwendoline Christie (Brienne of Tarth): “Charles Dance on the toilet — thank you.”

A GENTLEMAN TILL THE END

Hodor became a fan favorite on “Thrones,” and his death was touching and memorable: As Hodor, played by Nairn, tries to keep holding the door to give Meera time to escape with Bran Stark, who is unconscious, he sacrifices his life as the White Walkers’ minions tear him apart.

Nairn: “I definitely cried the first time I watched it. It’s very different watching it back than it is doing it at the time. Yeah, I still get teary when I watch it sometimes. …I watched a lot of people’s reactions to Hodor dying. That actually moved me.”

Kerry Ingram (Shireen Baratheon): “The one that hit me the most is probably Hodor’s death. …When that happened I was just so shocked because I didn’t know what was going to happen. …The acting, the way that it was presented was just incredible. It’s just such an amazing piece of television. It’s heartbreaking, but amazing.”

Ramsey Bolton, played by Iwan Rheon, had his fun when he brutally tortured Theon Greyjoy and Sansa Stark, and killed his own father and pregnant stepmother. So, it was only appropriate that the favor was returned when Ramsay’s drooling dog — who hadn’t eaten for some time — was let loose on his master, and had his way with him.

Pilou Asbaek (Euron Greyjoy): “I like the way Ramsay died. He got eaten by his own dogs. That’s a very Scandinavian death. I like that … because it’s brutal. And it’s poetic.”

When you’re Olenna Tyrell and you don’t approve of your granddaughter’s husband, you’ll poison him on their wedding day. That’s what happened to former king Joffrey Baratheon, who died in front of family, friends and foes after drinking poison.

Iain Glen (Ser Jorah Mormont): “Those eyes, you know, the strangulation, the going red … I thought it was just a brilliantly acted death and it was a surprise, like all good ‘Thrones’ deaths are; just the way it manifested itself. It had captured everything that’s great about ‘Thrones’ I think.”

ALL FIRED UP FOR LIGHT

Princess Shireen Baratheon’s death scene — she was burned alive as a sacrifice to R’hllor, known as the Lord of Light — was a hard one to watch. Her parents OK’d the death, though her mother later regretted it and tried in vain to save her daughter.

Liam Cunningham (Davos Seaworth): “My little girl Shireen. That was heartbreaking. I cried when I read that in my little room at home, when I had the pages open. … I hoped it was a joke. A horrible thing to happen but incredibly dramatic as regards to storytelling.”