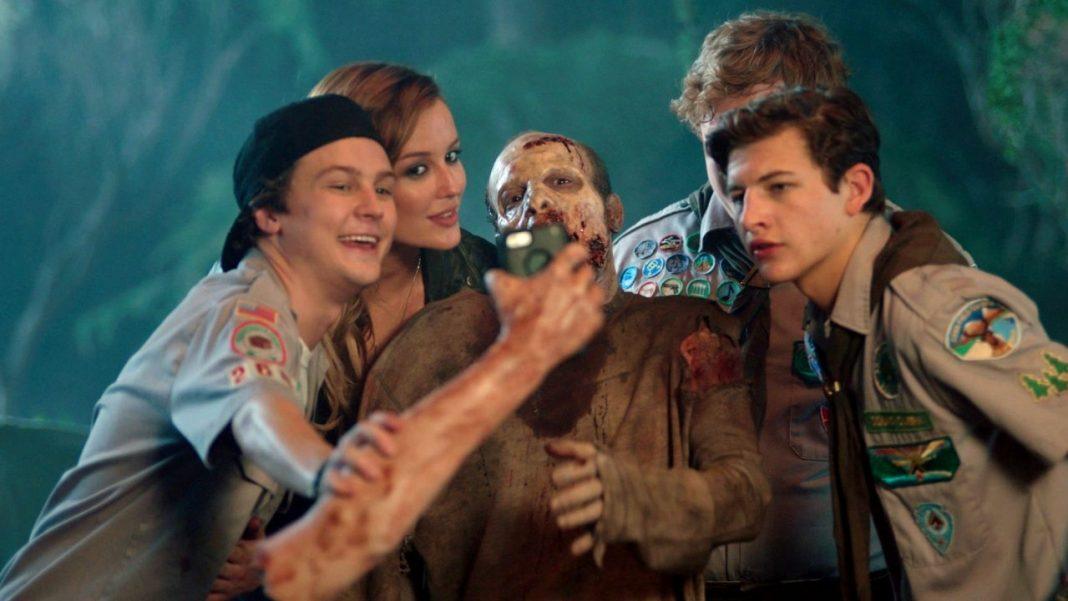 Hollywood’s newest venture into the zombie phenomenon takes a more humorous look at the idea of a Zombie Apocalypse. The trailer for the movie “Scouts Guide to the Zombie Apocalypse” has been released, as the film’s marketing ramps up in anticipation for its upcoming Halloween release.

Just like previous films in the horror-comedy genre like Shaun of the Dead and Zombieland, Scouts Guide to the Zombie Apocalypse tries to bring in laughs while capitalizing on the blood and gore of the horror movie business.

The movie was co-written and directed by Christopher Landon, who has previously worked on several of the Paranormal Activity sequels as well as Disturbia. Landon has taken a leap from the horror genre, but not too far as he is still uses plenty of his prior techniques within his newest venture.

The movie is about a group of Boy Scouts, who make it their goal to get into a party that is being thrown by the town’s cool kids. However, this plan goes horribly wrong when they find out there are in the midst of a zombie apocalypse. Tye Sheridan, who is also staring as young Cyclops in X-Men Apocalypse, leads the pack of scouts. Alongside Tye, is Logan Miller and Joey Morgan and Patrick Schwarzenegger (yes, Arnold’s son) as the leader of the cool kids.

From watching the trailer, it is obvious that the movie is trying to capture a similar type of humor that was seen in Superbad. With a main cast of teenage boys, there is no doubt that this movie will be filled with swearing, offensive jokes and plenty of nudity (some of which can be seen in the trailer). The fact that the trailer includes a scene where the boys are watching a stripper who turns out to be a zombie, kind of gives the audience a sense of what direction they were trying to head with this film. However, from the trailer I have my doubts that the movie will be able to capture the comedic appeal that Superbad was able to through its R-rated themes.

Unfortunately, the film also was fairly low budget and this is evident in scenes such as the one where the Scouts are being attacked by zombie cats. Since the film itself doesn’t seem to have my substance in terms of innovative comedy and wit, it is hard for it to get away with scenes where its low budget becomes very apparent.

It seems Paramount Studios is aware of the film’s potentially limited appeal that could stem from its low budget and niche comedic approach, as they have decided to release the movie on Video on Demand just 17 days after its initial theatric release.

Despite its shortcomings, the trailer does manage to jam-pack a slew of insane gore filled scenes, over-the-top humor and all the stereotypical sexual innuendo you would expect from a team of teenage boy scouts who team up with a tall blonde cocktail waitress in attempt to save the world.

In addition, although the film stars mainly young up-and-comers, it does have some cameos from more prominent comedians such as Cloris Leachman, who has been on numerous comedy sitcoms (including Malcolm in the Middle and Raising Hope), as well as Anchorman and The Office’s David Koechner.

Furthermore, although Scouts Guide to the Zombie Apocalypse may not be bringing the most innovative and witty humor to the screen, it does deliver on over-the-top, NSFW comedy that is evidently appealing to some.

It will probably draw in the crowds that will take any excuse they can from being dragged to the latest “based on a true story” horror flick. So come Halloween, it is up to you whether you want to see teenage boys blowing up zombie strippers or “real-life” ghost stories caught on a family’s video camera (which you can see inParanormal Activity: The Ghost Dimension that comes out around Halloween as well).

Scouts Guide to the Zombie Apocalypse will open in theatres on October 30th, and will be available to stream on-demand on November 16th.