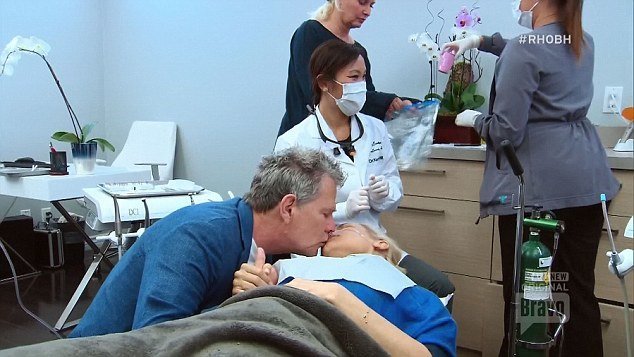 Real Housewives of Beverly Hills continued its season 6 kick off with episode 2 “Ciao, Tuscany!” In tonight’s episode, we get to see just how rich Lisa Vanderpump and Kylie Richards are, and Yolanda continues to try and pinpoint what is making her feel so ill.

In the beginning of the episode, Lisa V and Kyle are planning out their trip to Tuscany. The initial plan was for Lisa to meet Kyle and her family out there and then Kyle’s clan were going to head out to a family wedding (Nicki Hilton) in London. However, Kyle reveals to Lisa that she has been asked to no longer attend the wedding, due to conflict between the family members.

Afterwards, we see Eileen and her husband Vince still struggling with the death of Vince’s father, actor Dick Van Patten. The couple decides to visit Dick’s star in Beverly Hills. Somehow even when Eileen is in tears, she somehow seems emotionless and bland. Honestly, she made her whole scene seem like she was playing her character from The Young and The Restless or Days of Our Lives. I guess that’s what decades of being on soap operas will do to you.

Meanwhile, Lisa V meets up with her name twin, Lisa Rinna. While having lunch, Lisa V reveals that her husband, Ken, will be turning 70, and she wants to do something extra special in celebration. However, as Lisa R puts it, “what do you get a man who has everything?” Fortunately, Lisa V already has a plan in motion, as she tells Lisa R that she is buying a super miniature horse (second smallest one in the world apparently) for Ken from a breeder in Ohio. She then proceeds to ask Lisa R to join her on her trip to the mid-west to retrieve the horse.

Once again, Yolanda is seen barefaced as she enters a dental center. Yolanda explains that she is getting all of the crowns taken out of her teeth to ensure they didn’t have any harmful metals in them that could potentially be the cause for the severity of her condition. While going through the seemingly painful procedure, Yolanda gets a visit from (her then husband) David Foster. I can’t imagine how hard it must be for her to watch this episode now that they have announced their divorce, as she continuously says I love you throughout the scene and even jokes to him, “aren’t you happy you married me?”

Kyle, Mauricio and their kids jet off to Italy where they proceed to go on an extravagant cruise in a private 5-bedroom yacht, equipped with servants and 5-star chefs. The biggest problem in their life is the fact that the private villa they are spending the next few days in is an hour and a half away, not forty-five minutes like they had originally thought.

Shortly after, Ken and Lisa V land in Europe and head off to the villa where they are meeting up with Kyle’s family. Lisa mentions that she misses the lifestyle there, especially the fact that it’s acceptable to start drinking early in the day (although I think she manages to get away with doing the same back in Beverly Hills, but she doesn’t don’t like to admit it).

When everyone is all settled in at the villa, Lisa and Kyle decide to take a trip around the countryside in the Ferrari that Mauricio rented. Kyle reveals that she grew up with a mother who was a “rule breaker,” thus she has been driving around sports cars since she was only 13. At first, Lisa is nervous to have Kyle behind the wheel, but soon enough is begging Kyle to get the car out of first gear and put the pedal to the metal.

Back in Beverly Hills, Lisa R and Eileen decide to give Yolanda a visit. While waiting in the foyer, Lisa R reveals (ON NATIONAL TV) that her daughter Amelia, 14, has a huge crush on Yolanda’s son, Anwar, 16. While I love Lisa, I would not be happy if I were Amelia after tonight’s episode aired! Lisa claims she knows that Amelia is going to “kill [her]” for revealing her crush, but she “couldn’t help [herself]” because it’s all her daughter ever talks about. She jokes, “he’s like Jesus in our family right now.”

While visiting, Eileen and Lisa get a glimpse of Yolanda’s medical closet, which is completely packed with what seems like every pill bottle money can buy. Yolanda explains to her guests that she hasn’t been making any progress, but is still determined to get better. She tells them about the dental procedure she underwent and also reveals that she just got over an “extreme parasite infection.” Cleary, she is fighting an extremely tough battle at this point.

Meanwhile in Tuscany, the crew all sits down for a dinner outdoors. Kyle has seemingly persuaded Lisa to try out one of her signature flowy dresses, or her muumuus, as Ken likes to call them.

Before sitting down to eat, Kyle and Lisa end up talking about Yolanda’s health. Passive-aggressively, Kyle seems to hint that she thinks part of Yolanda’s illness is due to her mental state and not actually something physically wrong. However, they both agree that something is terribly wrong with their friend.

At dinner, Kyle reveals out of nowhere that she is, in fact, going to Nicki’s wedding, which takes Lisa by surprise as the last she heard was that Kyle was banned from attending. However, things get weird when Mauricio and 2 out of the 4 daughters reveal that they are not going to the wedding. Evidently, there is still some tension within their extended family dynamic. Lisa tells Kyle she needs to take charge of the situation and stop letting her sisters control her and send her on a “rollercoaster” all the time. Unfortunately, while Lisa makes some valid points, Kyle clearly isn’t in the mood to talk about it over family dinner. Kyle’s teenage daughter Alexia decides enough is enough and announces that no one is allowed to talk about their family issues for the rest of the trip.

Catch the next episode of Real Housewives of Beverly Hills on Monday, December 15 on Bravo.

Kyle returns from her European vacation and receives bad news about her sister, Kim. The two Lisas head off to Ohio to pick up Ken’s present, and a new housewife is introduced.