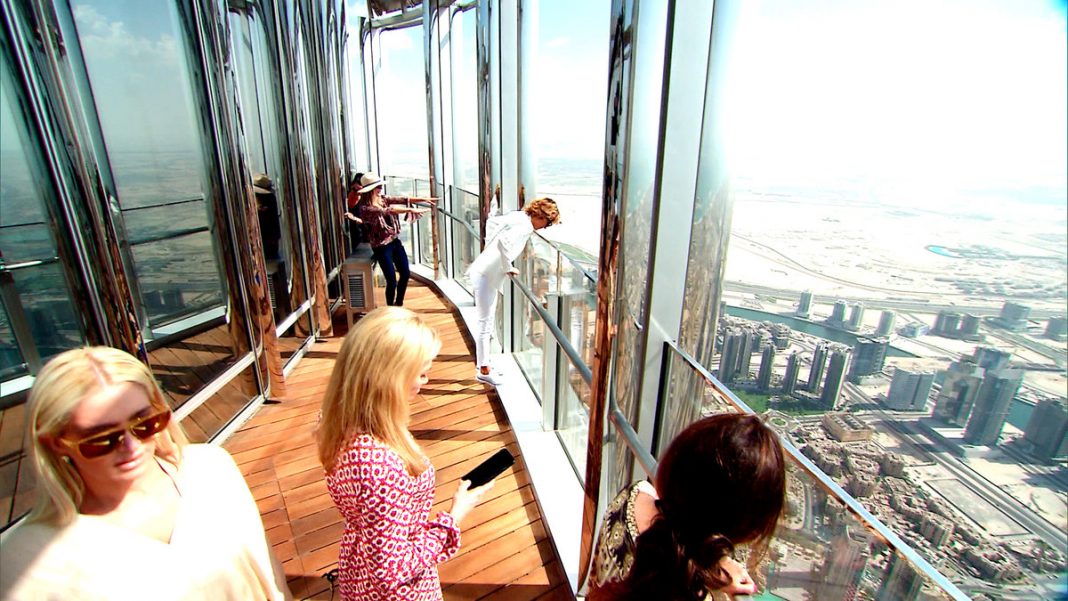 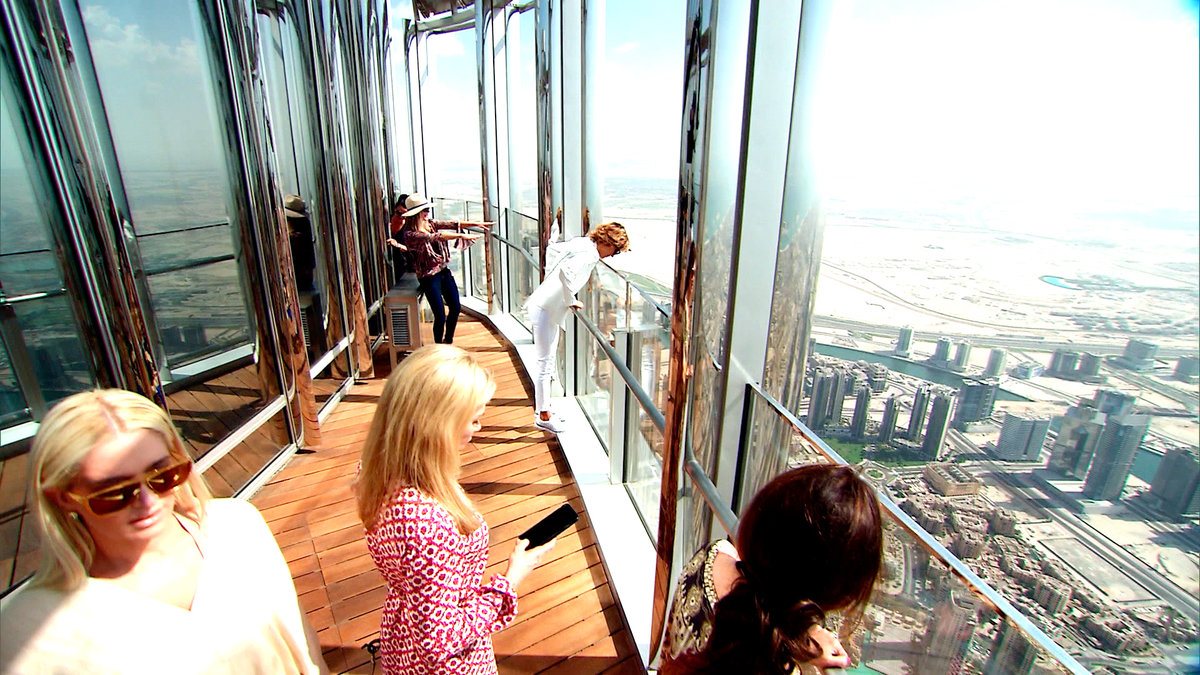 This week’s episode of The Real Housewives of Beverly Hills “Goodbye, Dubai,” the women get in a few more activities during the final days of their vacation. In addition, the ladies gather for an extravagant birthday dinner for Kathryn on a yacht.

The episode kicks off with the group attempting to put all of the drama behind them, as they embark on a shopping trip at an over-the-top mall. Here the ladies truly look like movie stars as they walk the mall’s red carpet in their glamorous outfits. In addition, they are pleasantly surprised when they realize they will be escorted around the mall in fancy little mini cars. Needless to say, the housewives definitely did their part in contributing to the mall’s revenue that day.

Unfortunately, while they are just trying to have fun, there is some obvious tension and miscommunication between Lisa R. and Lisa Vanderpump While Lisa V. reveals to Kathryn that Lisa R. has been avoiding her all day, Lisa Rinna is heard in confession saying that she believes Lisa V. wants absolutely nothing to do with her.

After doing some major damage at the mall, the group heads off to The Burj Kalifa, which is the tallest building in the world. The view is incredible, and the housewives all marvel at it from the observation balcony. To put things in perspective, the women are stunned when they realize they are looking down at a flying plane.

While up high in the sky, Lisa V. takes the opportunity to pull Eileen Davidson aside and resolve the issues between them. Lisa genuinely apologizes for prying and making Eileen uncomfortable in the past. Eileen accepts her apology, although things still seemed a bit tense/awkward afterward.

Back in Beverly Hills, Yolanda is busy having a picnic lunch with her pals Kim Richards and Brandi Glanville. Ironically enough, as Brandi sits beside her friend Kim who continues to struggle with her sobriety, she confidently wears a shirt that reads: “it’s not fun to be sober.” However, Brandi was quick to let Kim and Yolanda in on the fun, as she gifts them each with a “funny” shirt (Kim’s said “Medicated,” while Yolanda’s said “Sick”). Brandi laughs and tells them its better to get in on the jokes than to get upset by them.

Later during their lunch, Yolanda Foster opens up about how people have reacted to her illness. She admits that while people rallied around her in the beginning, many of them jumped ship when her condition turned out to be chronic.

Meanwhile in Dubai, all of the women get dolled up for a nighttime yacht ride in celebration of Kathryn’s birthday. While Lisa R. reveals she has never been on a yacht, Erika is busy telling confessional how she used to own a yacht, but she traded it in for a plane because planes are better. Thus, while they may all be rich, there are some obvious differences in lifestyles amongst the housewives. 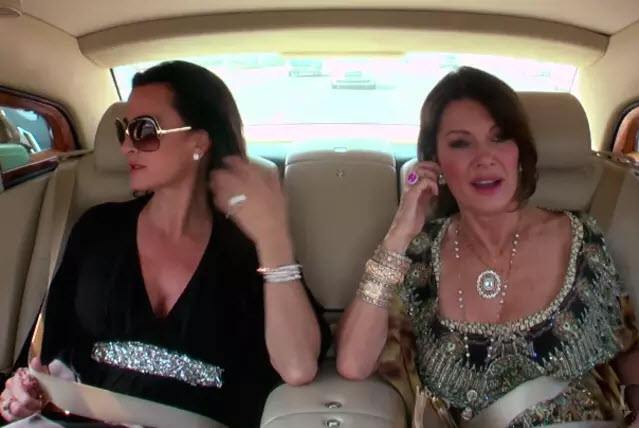 While on the yacht Erika confronts Lisa R. and Eileen, as she explains that she is confused about the conflict between the two Lisas. Eileen and Lisa R. go on to explain that Lisa R. was put in the middle of the whole Yolanda illness drama by Lisa V. However, Lisa V. now refuses to “cop up” to any of her involvement in the whole mess.

Once the ladies all sit down for dinner and toast to Kathryn’s birthday, they proceed to sit in awkward silence – which is obviously not normal for this group of housewives. This prompts Kyle to encourage the women to talk some of their issues out so that they can start enjoying each other’s company again.

After some suggestive remarks, Eileen finally comes straight out and says that Lisa R. feels set up by Lisa V. She then goes on to explain that Lisa R. thinks Lisa V. has her own issues with Yolanda and thus wanted the whole Munchausen thing to escalate, but didn’t want to personally be apart of it.  Lisa R. then clarifies that she takes responsibility of her involvement in the situation. However, she feels like Lisa V. was trying to throw Kyle under the bus to save her own behind.

Kyle then gets confused with the situation, as she realizes that Lisa V. potentially betrayed their friendship. However, Lisa adamantly states that it was simply a wording issue, and she had no intention to get Kyle involved. Lisa then goes on to explain that she was nervous that Lisa R. was planning to drag others down with her. Immediately Eileen freaks out and defends Lisa R., as she thoroughly believes she had no intention in involve anyone else in the Munchausen situation.

Things escalate as Kyle admits that her close friendship with Lisa V. has shaped how she has reacted to the whole situation – i.e. she let Lisa V.’s manipulative behavior slide because they are good friends.

While all of the ladies get up from the table, Lisa V. and Kyle get into a heated one-on-one conversation. Kyle exclaims that she looks like an idiot for covering Lisa’s tracks. She then goes on to advise Lisa V. to figure out her story, as the one she is telling is clearly not checking out. They end up “dropping it,” however Kyle is clearly enraged as Lisa can’t help but get the last word in (claiming that she never tried to get Kyle involved).

Lastly, the ladies somehow muster up the courage to come together for one last hurrah. They all gather around as Kathryn openly states her wishes before blowing out the candles of her birthday cake. Kathryn acknowledges that they might not always get along, but she hopes they can, at least, be “civil to each other.”

You can catch the finale of Real Housewives of Beverly Hills when it airs next Tuesday, April 12 on Bravo.