Home All News Movie News So Now Everything is R-Rated in Superhero land? 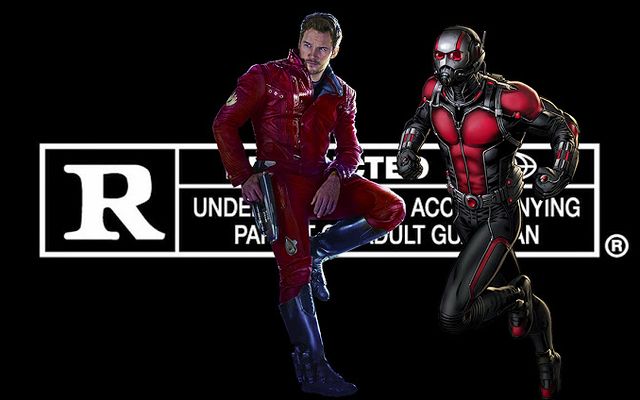 Deadpool is the surprise superhero movie runaway hit and is currently has the highest domestic gross for the X-Men franchise. For something from the guy who played Green Lantern, could the film’s R-rating have had something to do with it and not Ryan Reynolds‘ successful portrayal of the character nor the film’s faithfulness to the source material? I read somewhere that producers might get the wrong idea about Deadpool’s success. Unfortunately, that seems to be the case. The film’s success has inspired producers to announce R-rated cuts and versions of other superhero movies including Batman V Superman. Are fans and the general public ready to see R-rated films based on known family-friendly characters?

Apparently so. There’s talk of having an R-rated cut of Batman V Superman. There’s talk that Wolverine 3 will be R-Rated. There’s a joke that the next Ant-Man is going to be R-Rated. Smurfs 3 might be R-rated as the cute little guys will be saying ‘smurf it’ all the time. At least there’s a fat chance the next Avengers movie is going to be R-rated. Captain America will be censoring everyone. Disney’s family-friendly image won’t allow such a thing. Fox doesn’t have such problems.

What makes an R-rated movie anyway? Lots of cussing, lots of violence, killings and disembowelment and plenty of sex and nudity. Sex and violence always sells so combine that with today’s high-grossing superhero movie and you got yourselves a blockbuster. That’s one of two important lessons from Deadpool. The other is following the source material.

The costume alone shown in the leaked comic-con footage got fans swooning. The thing about Deadpool is that he’s more of a deadly mercenary than a hero. He’s a crazy psychopath who has no problem offing his enemies by using guns or his double katanas. He’s not a full psychopath as he knows to do the right thing in comics. The right thing, meaning the bigger end result of his exploits. He does swear a lot, and he kills violently, so that makes him R-rated.

Jessica Jones is also a successful R-rated TV show about a former superheroine turned private detective. She’s also fit to be in an R-rated show because she was written that way from the start. Imagine a superhero turned into a sex slave / killer for eight months because of mind-control yet being fully aware of everything. That sort of thing damages most people resulting in a broken, alcoholic, cynical bad-mouthed, sex-starved character. So yes, R-rated works for her too.

Wolverine 3 could be R-rated as its said to be based in the Old Man Logan books. The Old Man Logan story is supposed to be pretty savage. Wolverine himself can sometimes be pretty savage. A man with six razor-sharp blades coming out of his arms isn’t exactly campy. What keeps Wolverine from being R-rated is his close association with the mainstream X-Men franchise. But the next Wolverine installment can easily be disassociated and could be a welcome change. But what about Batman V Superman?

I suppose such a thing could be possible with Dawn of Justice. Wonder Woman is a sexy supermodel amazon who wields a sword and has every right to decapitate somebody. Realistically, amazons are supposed to be highly-skilled warrior-women (with a potentially Sapphic society). Batman could punch up a storm and beat up some thug within an inch of his life while his enemies don’t need to be as restrained.

The same can’t be said about Superman. He’s a red and blue Kryptonian boy scout. While everyone else cusses, swears and kills, everyone’s favorite superhero will be out of place in his own movie. Zack Snyder’s slightly darker take on Man of Steel has already drawn mixed reactions and comparisons to Christopher Reeve’s classic movies.

But of all three characters, Batman is the character with the most R-rated potential. Batman has had a long time disassociating himself from the old campy Adam West approach. Superman and Wonder Woman might need some time before big screen viewers can get used to the idea of them being in an R-rated film.

Speak for myself some fans might say about Wonder Woman. She’s practically every man’s dream. Every adult male and some females probably won’t mind some partial nudity and sex scenes for everyone’s favorite demi-goddess. Scene with here going at it with Bruce Wayne or Clark Kent would blow everyone’s mind. The same goes with other luscious heroines out there like Storm, Spider Woman and Zatanna.

The thing is, just because Deadpool was successful as an R-rated film doesn’t mean that everyone should join or, at least, talk about joining the bandwagon. Deadpool was supposed to be R-rated. Jessica Jones was supposed to be R-rated. If Suicide Squad is going to be R-rated, then perfect since the team is composed of murderous psychos. Wolverine could be R-rated but younger fans waiting for another Hugh-verine flick will be alienated. An R-Rated Batman flick? Same thing. R-Rated Superman? Why? Younger fans will suffer should mainstream characters suddenly become R-rated on the big screen. There are tons of other characters out there that will do well in more adult environments like The Punisher, Black Cat, Catwoman, Judge Dredd, Tank Girl, Lobo, Spawn, Gen13, maybe even Psylocke.

As I’ve always told friends, a good superhero movie does not necessarily need an R-rating. It just needs to be as close as possible to the source material. Because it’s enough for fans want to see them on the big screen in the great classic stories told in their respective publications which fans will rave upon and non-fans can enjoy. Not re-imaginings by over-creative and over-inflated egos. If fans are pleased, the grapevine will do the rest.