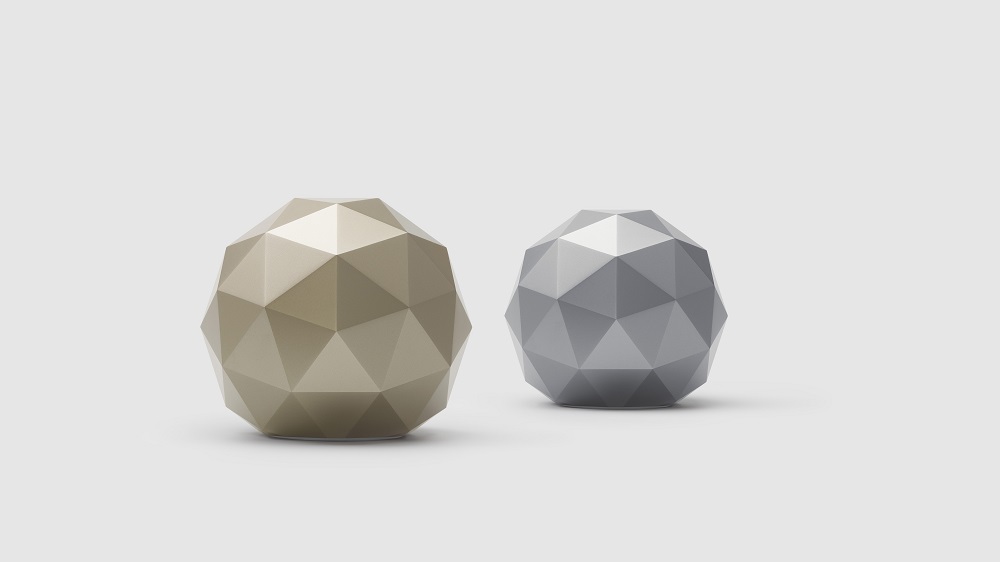 When it comes to wireless routers, the first thing most people think about is where to hide the monstrosity as they tend to look like spiders from those horror movies in the 1950’s.  But Symantec has recently delivered Norton Core, a stunning wireless router that you’ll be wanting to display proudly rather than trying to shove it behind your TV.

No more of those black tentacle looking things sticking up from a black base, Norton Core is a very ambitious WiFi router in both function and design. While you may take some time figuring out the best place to show it off, learning about the advanced network security tools and parental control features will show you it’s more than just a pretty face. 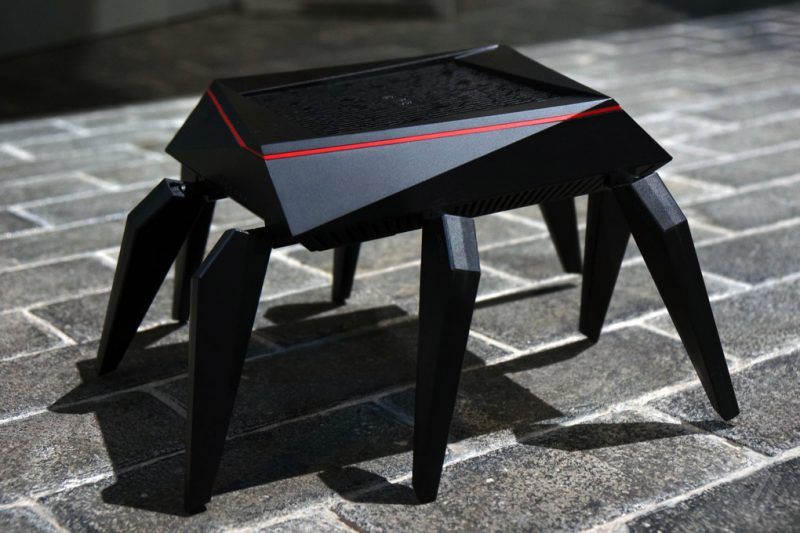 Now that our homes are filling up with smart devices, hackers are honing in on those without safeguards to help protect you or your family. Back in 2016, smart toasters were actually hacked and besides creating havoc burning people’s toast for fun, it was able to shut down The New York Times, Spotify and Twitter. Yes, all that from a smart toaster. You can only imagine what could happen with your smart refrigerator or voice-activated devices.

So, if we’re going to make our lives easier with these gadgets, it only makes sense to help protect them as most of the manufacturers aren’t thinking about this. Another fact that may shock many of you is that several of the large cable/internet providers give you a modem that comes with a password that is literally ‘password.’ The problem with this is that many of these companies won’t give you access to change the password so hackers basically have an opening into your home network.

I personally learned this the hard way when hackers that kept trying to get into our website, they tried going in through our modem and routers at the office. While our router had a password we set, the main modem wouldn’t allow us in. When I contacted our internet service provider about this, their techs let me know that they don’t allow customers access to the router to change the password so you’re just stuck with the ‘password.’ It’s crazy, I know, but this is where using a secured WiFi router like Norton Core will help take those worries away. Norton Core defends your connected devices on your home network, like your child’s connected talking doll, by stopping cyber-attacks at the network level.

Before an online hacker can get into your network, they have to go through your router first. While most routers have password protection, they may not have the latest updates to protect you from the latest bot or malware. I personally would rather have a router from Symantec as they are continuously updating their software, which now it applies to their wireless router. I had never thought about Symantec creating a product like Norton Core before, but after testing it out and putting it through its paces, I’m left wondering, what took them so long? 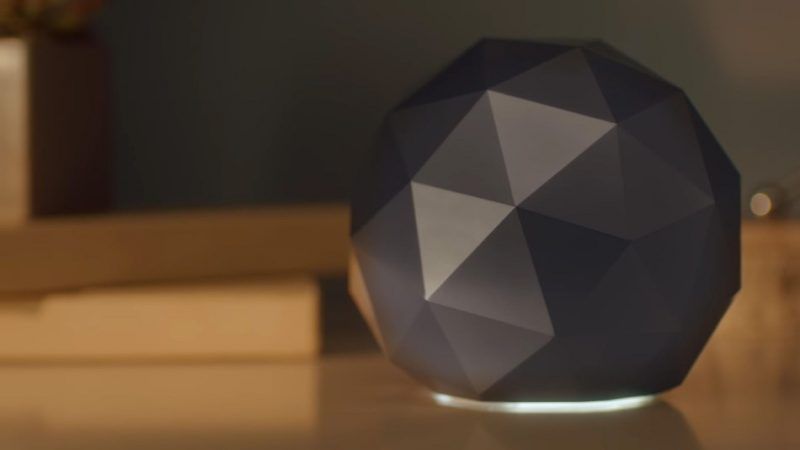 Hands down, this is the best looking router you’ll find on the market today. It truly is a piece of art, and most people seeing it for the first time would assume that’s exactly what it is, until they turn it over.

Norton by Symantec obviously realized that most people hide their routers behind their TV’s which isn’t always the best place for a router to go. For your home network to function at its best, the router should be at the center of it all. With the beautiful look, that makes it easy, and the ports are hidden in a section under it. There are four separate Ethernet ports (one Gb WAN port, 3 Gb LAN ports), power button, a refresh button and two USB 3.0 ports locked away snugly out of sight.

Even better, is that in the back, there’s a scooped out area for cables not to be seen 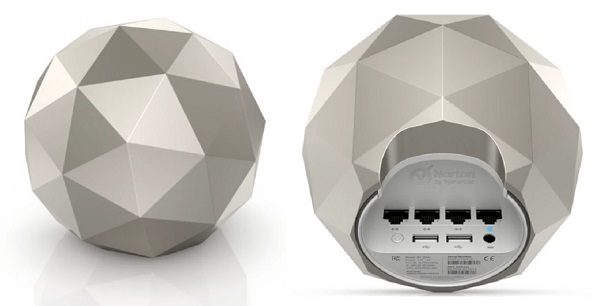 Since the Norton Core is much more than your basic wireless router, it comes loaded with a dual core 1.7GHz processor, 1GB of RAM and 4GB of eMMC Flash memory. It has 2.4GHz and 5GHz dual-band radios which support dual-band 802.11ac Wave 2 Wi-Fi, along with MU-MIMO streaming technology that gives it some great future-proofing1. The 4X4 AC 2600 router runs a compact version of Linux.

For those of you with older machines, this is backwards compatible so it will have no problem connecting to older AC equipment and even those with G mode.

What makes the design so smart with Norton Core is that the sphere actually hides a 2-3 inch antenna along with four dual-band “beam forming” antennas for great coverage. This “beam forming” allows it to dynamically extend coverage to users it detects.

Where directional antennas are only able to create a signal beam focused in one direction, Norton Core is able to better distribute the signal when it’s in heavy use mode. This is a huge plus and makes it more powerful than many competing models. 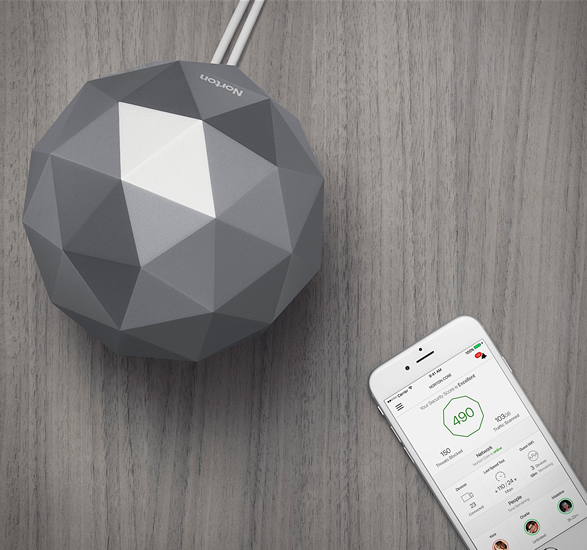 With conventional wireless routers, you usually have three or four settings for a firewall and that’s your protection. Norton Core changes that by utilizing network packet inspection combined with intelligence from the Symantec Global Intelligence Network where their security experts are sensing, analyzing, and eliminating cyber security attacks. Norton Core includes a complimentary subscription to Norton Core Security Plus2 which means you receive protection from the known malware threats out there, but you also have peace of mind from those threats that haven’t gotten popular yet.

As a long-time Norton software user, I feel very comfortable trusting a router from them than say a competitor without their security reputation. Norton Core is basically another tool to assist with scanning for cyber threats on your home network using their protection.

It continually will scan the connected devices on your home network and give you a security score along with any fixes or recommendations that should be made. What other wireless router can do that for you? While we are very security conscious at our home office, Norton Core found one device that was out of date and gave us a quick update. Like their software, Norton Core gives you the ability to reconfigure any changes it makes if something goes awry.

Norton Core keeps a close eye on the data flowing in and out of your network monitoring for something that may appear suspicious. If any malformed traffic hits or malicious requests arise on your home network, it jumps into action. If one of your devices initiated the traffic, it will revoke internet access. This is a huge plus as this is how many attacks come through without anyone knowing what’s happened. Many times, hackers will get in through the most innocuous of devices and wait until it’s able to connect to your other devices before unleashing its full might. That will not happen with Norton Core, it will even send you a push notification if any new devices connect to your network.

Since Norton by Symantec has a huge knowledge base, it is able to continually learn to identify dangerous behavior and apply it to your network. 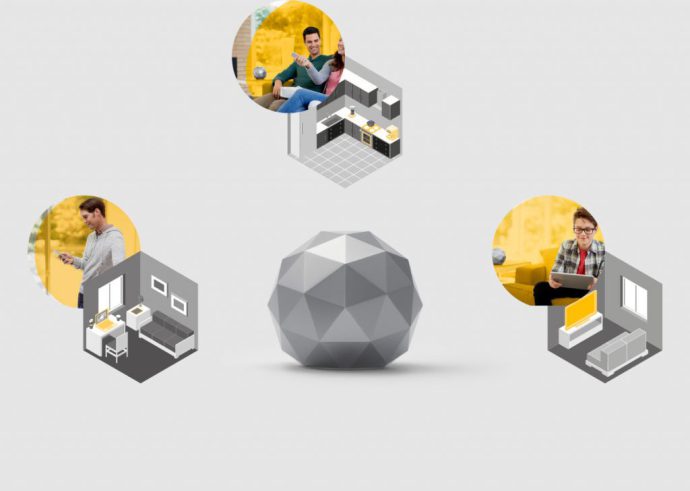 A huge bonus with Norton Core is the filtering tools that can keep your family protected from sites you don’t want your kids to see. You are able to select the types of sites your family can access and it will send you a notification if someone tries to go where they shouldn’t be. You can be sure your kids will probably test that.

The filter also allows you to set limits to the bandwidth each device uses which is important as some cable companies are now putting a cap on these things. Nothing is worse than getting a surprise addition to your bill.

Is It Worth It?

This is one of the easiest questions to answer with a big ‘Yes.’ Most users with wireless routers just get them and hope they work without knowing much else. This is perfect for those wanting a more secure home network without having to get certified in it.

It’s a very simple setup for those that have gone through the painful process of using your computer. With Norton Core, you download the app for Android or iOS and create a Norton account if you don’t already have one. Using its Bluetooth radio, it is able to communicate with your smartphone and get you all set up3.

Basically it just has you select the network connection you have, and then it just walks you through naming your new network and giving it a password. I had my most tech-phobic friend try to set it up, and it took him less than ten minutes, and most of that was just Norton Core updating its firmware.

Norton Core has excellent range, and since it’s so great to look at, you’ll have no problem placing it in the center of all your devices. It comes in Titanium and Gold so you have a choice, or just get one of each with the upcoming holiday season silver and gold motif.

To get your hands on this amazing piece of art disguised as a wireless router, go to Norton by Symantec website and give it a try.

This article was sponsored by Symantec, but as a long-time Norton user, all opinions are mine.

2. By purchasing on Norton.com, you receive one-year complimentary subscription to Norton Core Security Plus that will automatically renew each month thereafter, billed at $9.99/mo USD (plus applicable taxes). Subscription renewal is requires for security and parental control features after complimentary term.  Please review complete terms and conditions.