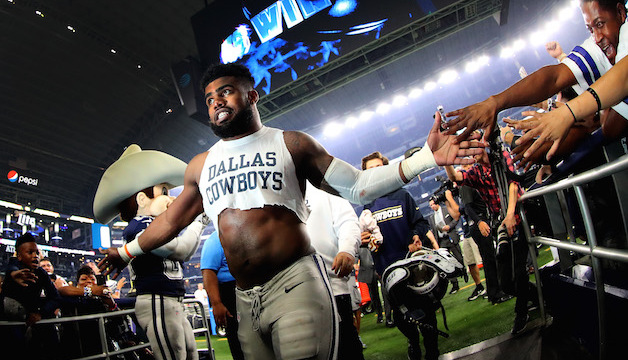 A suspension was already looming over Ezekiel Elliott‘s head for that Dallas bar fight back in July, but it was another case of alleged domestic violence that has sidelined the Dallas Cowboys running back.

Elliott was suspended for six games Friday after a yearlong NFL investigation of his domestic violence case in Ohio.

The 2016 NFL rushing leader was suspended despite prosecutors in Columbus, Ohio, deciding a year ago not to pursue the case involving Elliott’s girlfriend at the time in the same city where he starred for Ohio State.

The league, however, said there was “substantial and persuasive evidence” that Elliott had physical confrontations last summer with his then-girlfriend, Tiffany Thompson. Elliott will be eligible to return to the active roster on Oct. 23. His first possible game will be Week 8 at Washington.

Elliott, who turned 22 last month, has three days to appeal the ruling. One of his agents didn’t immediately respond to a request for comment. The NFL Players Association said it was reviewing the decision and had been in touch with Elliott’s representatives to consider his options.

The ruling requires Elliott to get an evaluation to determine whether he needs counseling or treatment, and to show proof that he is following up on any recommendations that are made.

The league revised its personal conduct policy in 2014 following sharp criticism of a case involving former Baltimore running back Ray Rice. The policy gave Commissioner Roger Goodell authority to suspend players for at least six games in domestic cases, with or without a conviction.

In a letter to Elliott informing him of the league’s decision, NFL special counsel for conduct Todd Jones said advisers brought in by the league “were of the view that there is substantial and persuasive evidence supporting a finding that (Elliott) engaged in physical violence against Ms. Thompson on multiple occasions during the week of July 16, 2016.”

Last September, the office of Columbus City Attorney Richard Pfeiffer cited conflicting and inconsistent information in the evidence in deciding against criminal charges.

The NFL’s letter to Elliott cited the Ohio case and an incident this past spring when Elliott was caught on video pulling down a woman’s shirt while watching a St. Patrick’s Day parade in Dallas.

The decision came despite Cowboys owner Jerry Jones saying he hadn’t seen anything to indicate Elliott was guilty of domestic violence and that he didn’t think his star back would be suspended. Jones made the comments several times, including during festivities last weekend when he was inducted into the Pro Football Hall of Fame.

Elliott has had a string of off-field issues in the year since the Cowboys made him the fourth overall pick in the 2016 draft. He was seen in a legal marijuana shop during the preseason in Seattle last year and was also involved in a bar fight in Dallas a week before training camp this year.

The All-Pro back finished with 1,631 yards rushing in helping the Cowboys to the best record in the NFC at 13-3 before a divisional playoff loss to Green Bay. He set rookie franchise records for yards, rushing touchdowns (15) and total touchdowns (16). 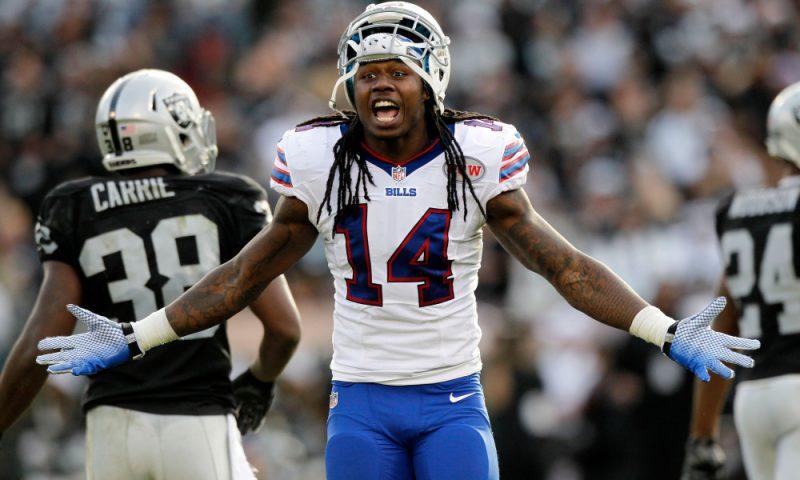 The Bills acquired cornerback E.J. Gaines from the Rams.

Buffalo also continued stockpiling 2018 draft picks by getting a second-round selection from Los Angeles and a third-rounder from the Eagles. The Bills dealt a sixth-round pick to the Rams as part of the Watkins trade.

The moves were made day after Buffalo opened its preseason with a 17-10 loss to Minnesota. The shakeup continues an offseason overhaul under new coach Sean McDermott and GM Brandon Beane.

Watkins’ future in Buffalo was already in question after the Bills in May declined to pick up his fifth-year option. He is entering the final year of his deal. Matthews is also entering the final season of his contract, so the Eagles also faced the possibility of losing him in free agency.

Gaines was valuable defensive back in the Rams’ rotation. He won a starting job in 2015 but then got hurt before the season started. He became expendable after the Rams acquired Kayvon Webster this offseason, who is pegged to start opposite Trumaine Johnson.

The Rams need playmakers for an offense that finished last in the NFL over the past two seasons. Watkins can be that type of dynamic threat when healthy.

He’s been hampered by an assortment of injuries and limited to playing just eight games last year after having surgery to repair a broken left foot. Watkins required a second operation in January after aggravating the injury last season.

In Los Angeles, Watkins is reunited with the Rams new coach Anthony Lynn, who spent the previous two seasons in Buffalo. Lynn started as the Bills receivers coach before being promoted to offensive coordinator last year and finished the season as the team’s interim coach after Rex Ryan was fired a week before the final game.

Watkins is also reunited with former Bills starter Robert Woods, who signed with the Rams in free agency after four seasons in Buffalo.

Matthews had been Philadelphia’s most productive receiver, averaging 75 catches, 891 receiving yards and six touchdowns in his first three seasons. But the Eagles signed free-agent receivers Alshon Jeffery and Torrey Smith in the offseason, drafted Mack Hollins and Shelton Gibson and have been pleased with 2015 first-round pick Nelson Agholor’s improvement.

Darby started 29 games in his first two seasons in Buffalo. He was a second-round pick (50th overall) in the 2015 draft. 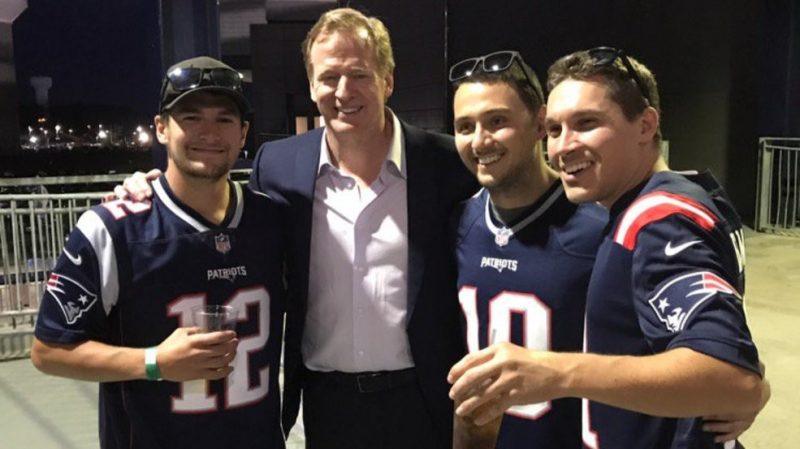 It was his first game in New England since suspending quarterback Tom Brady in the scandal that came to be known as “Deflategate.”

Goodell was in Kraft’s suite at the start of the game against the Jacksonville Jaguars, according to a photograph posted on Twitter by The Boston Globe. Patriots spokesman Stacey James confirmed to media outlets that Goodell was at the game.

The Patriots lost to the Jaguars 31-24 without Brady, who sat out the exhibition.

Goodell suspended Brady four games after an NFL investigation concluded he conspired to use illegally underinflated footballs in the 2015 AFC championship game against the Indianapolis Colts.

New England fans rallied to their quarterback’s defense and lashed out at Goodell for the harsh penalty that some thought was based on dubious evidence.

The Patriots went on to win the Super Bowl anyway – Brady’s fifth. 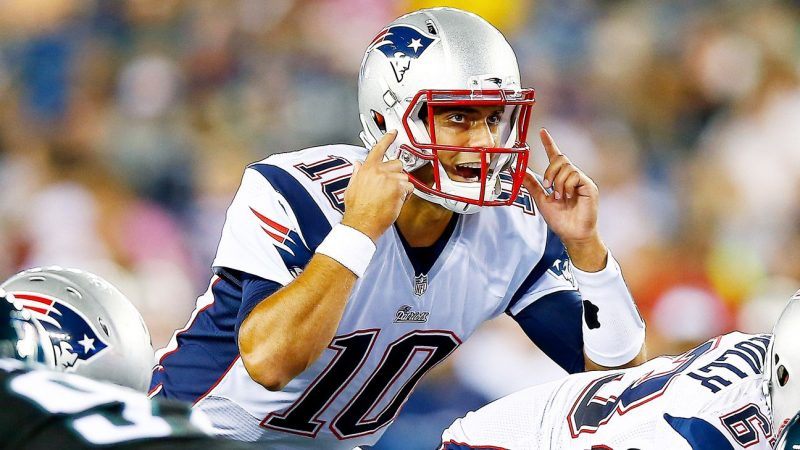 Jimmy Garoppolo missed his chance at an on-field audition when he was injured during Tom Brady‘s four-game “Deflategate” suspension last season.

So this might be his best chance to show the Patriots – or another team that wants to trade for him – that he’s ready to be an NFL starter.

“Coach always has us guessing,” the heir apparent said Thursday night after completing a Brady-like 22 of 28 passes for 235 yards and two touchdowns in a 31-24 loss to the Jacksonville Jaguars.

“You never know if you’re going to play a little or a lot,” said Garoppolo, who played two quarters and then went out for two more series in the second half while coach Bill Belichick sat the reigning Super Bowl MVP out. “When he put me back in, I was happy to get back out there with the guys.”

Chad Henne hit Keelan Cole on a 97-yard touchdown pass, Corey Grant scored on a 79-yard run, and the Jacksonville Jaguars feasted on a Patriots lineup without Brady and Rob Gronkowski – or much defense at all – to beat the defending NFL champions in their exhibition opener.

Garoppolo completed 13 straight passes at one point, finding Austin Carr on a 3-yard touchdown pass at the end of the first half and then K.J. Maye from 5 yards out to start the second and make it 17-17.

But the New England defense followed by giving up another one-play scoring drive – this one Grant’s run down the left sideline to make it 24-17.

“One of our basic plays. Coach called the play. The O line did their job. And then it was up to me to make that one guy miss,” Grant said. “And then it was off to the races.”

Third-string QB Brandon Allen hit Dede Westbrook from 42 yards out – victimizing Patriots cornerback Cyrus Jones for another big play – to make it a two-touchdown game. “We weren’t expecting the touchdown, but everything worked out perfectly,” Westbrook said.

Garoppolo was drafted in the second round in 2014 and has been stuck behind Brady, a five-time Super Bowl champion who has shown no signs of slowing down at 40 years old. The backup’s big chance might have been last year, when Brady was suspended the first four games of the season, but Garoppolo only lasted five quarters before a shoulder injury knocked him out.

Unless Brady gets injured, these exhibition games are probably Garoppolo’s only chance before he is eligible for free agency at the end of the season to show other teams he can play.

“He makes the throws, and he led his team up and down the field,” Jaguars defensive end Calais Campbell said. “I have a lot of respect for him, and I am excited to see when he becomes a starter some day and see how he does.”

Grant ran for 120 yards on eight carries for the Jaguars, who were playing their first game under new coach Doug Marrone after firing Gus Bradley following a 3-13 record. Executive vice president of football operations Tom Coughlin, the former New York Giants coach who twice beat the Patriots in the Super Bowl, watched from the press level.

Jaguars starter Blake Bortles completed 3 of 5 passes for 16 yards in two offensive series that resulted in one field goal. Henne came on with one play left in the first quarter and went 5 of 6 for 139 yards.

Patriots third-stringer Jacoby Brissett was 8 of 13 for 88 yards. He had a chance to tie or win the game with just over a minute left, but desperation passes sailed out of the back of the end zone on the final two plays of the game.

Patriots: Undrafted free agent tight end Jacob Hollister, taking advantage of extra playing time with Gronkowski out, caught seven passes for 116 yards, including a 38-yarder. Carr, an undrafted free agent from Northwestern, caught five passes for 44 yards, going high to bring down Garoppolo’s throw at the back of the end zone just before halftime.

Jaguars: Backup S Peyton Thompson left the game in the first half with a right biceps strain.

Patriots: Rookie DL Deatrich Wise left with a head injury in the first half.

NFL Commissioner Roger Goodell attended the game – his first visit to Gillette Stadium since suspending Brady for four games in the scandal that came to be known as “Deflategate.” Widely resented by New England fans, Goodell was spotted in Patriots owner Robert Kraft’s luxury box at the start of the game.

After struggling in 2016 on special teams, the Jaguars hired Joe DeCamillis and brought in several specialists. Rashad Greene Sr. had a 41-yard punt return. Arrelious Benn had a nice tackle on a punt return.