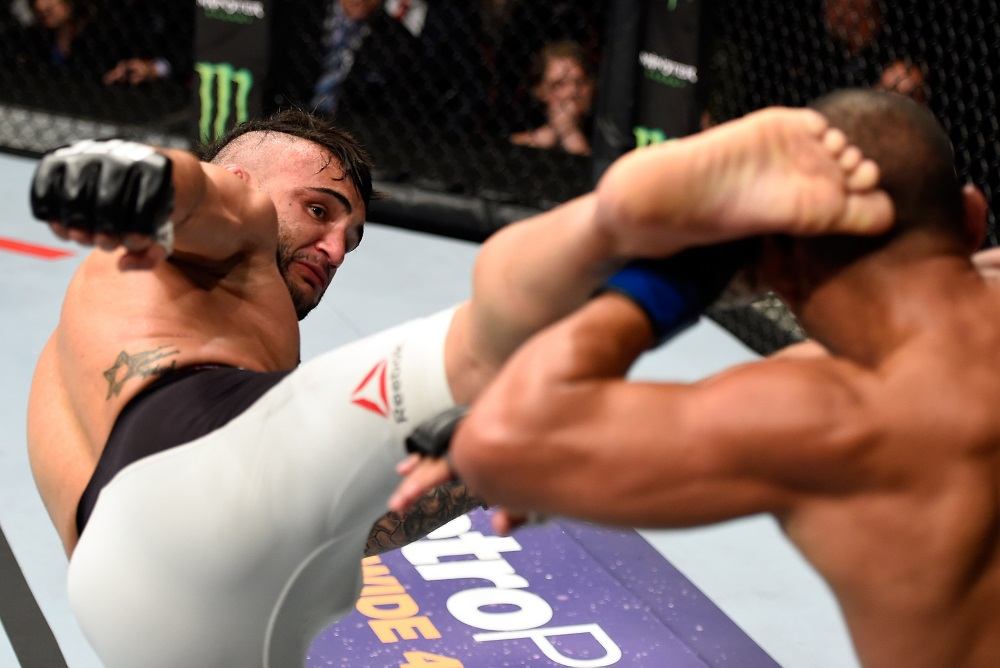 Besides some thrilling (and free) fights from the UFC’s trip to Portland, the story of this week in MMA was bout announcements. Too many awesome contests to keep track of were announced, but luckily for fans, all the news and developments are highlighted here.

The UFC’s return to Portland, Oregon went pretty darn well, with all things considered. Attendance was good, the fights were largely entertaining, and Daniel Cormier’s debut in the commentary booth was impressive.

In the main event of the evening, heavy-handed Brazilian striker John Lineker battled the similarly powerful John Dodson in a pivotal bantamweight clash. Across five exhilarating rounds, Lineker threw caution to the wind and charged towards his opponent, offering up—and occasionally landing—shots capable of putting other fighters to sleep. Dodson was focused on counterstriking and movement, and he too had some success.

The problem was, for Dodson, Lineker just didn’t seem to be phased by punches. Even when he connected with hard head kicks and punches alike, Dodson—a knockout artist—couldn’t stop Lineker from advancing relentlessly.

The contest’s end result was a split-decision in favor of John Lineker. Although noteworthy, this triumph won’t be enough to earn him a title shot, as he missed weight once again.

Oliveira implemented a clinch-based gameplan that saw him try and press Brooks up against the fence for as long as possible while connecting with chipping strikes. Will often reversed the position and landed hard blows of his own.

However, the “chipping” effect initiated by Cowboy paid off, as by the second round, Will Brooks was clearly wincing in pain and suffering from what he identified as a rib injury (later confirmed to be a broken rib). Brooks pushed hard to stay in the fight, but once the Brazilian took him to the mat in the final period, his relentless offense and connected punches caused the referee to intervene.

This must be an especially tough loss for Brooks, because he was generally better than Oliveira, to be frank—in the takedowns, on the ground when he mounted, and even while striking. However, Oliveira expertly dissected one aspect of Brooks’s game that was lacking, capitalized on it, and found the win. This is definitely the biggest victory of his career, and one that shouldn’t be taken lightly.

In the featured fight of the night, longtime competitor Joshua Burkman fought Roufusport product and promotional newcomer Zak Ottow. The competitive match-up saw both men have some success, with Burkman mainly being the aggressor. The end result of this one, which wasn’t quite as exciting as many expected, was a split-decision for Ottow. Nevertheless, the quality of this win cannot be understated for the new UFC fighter.

Finally, the main card kicked off with a flyweight showdown between ranked contender Louis Smolka and the promotional newcomer, TUF 24 veteran, the late replacement, and massive underdog, Brandon Moreno. Lo and behold, Brandon pulled off the upset.

In a phenomenal performance, Moreno asserted his dominance right from the opening bell—much to the surprise of Smolka. With his punches and his takedowns alike, Brandon competed with bad intentions. A completed takedown for the TUF competitor would be Louis’s undoing, as when he tried to stand up, Moreno locked-in a textbook guillotine choke, torqued it and rolled with it despite the best defensive efforts from his opponent. This guillotine choke sealed the deal less than three minutes into the fight.

UFC Portland was solid, but it goes without saying that next weekend’s UFC 204 is must-watch MMA. 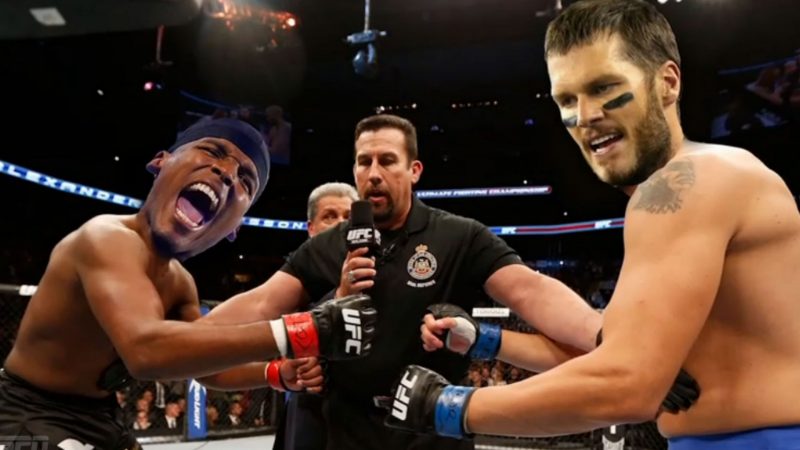 The UFC Gains a Number of Celebrity Investors

When the UFC sold to WME-IMG, many longtime fans were curious to learn more about the company’s new owners. The UFC’s previous majority owners, Frank and Lorenzo Fertitta, had become closely associated with the brand thanks to two decades of phenomenal work.

Now, these same fans have found out that many of the company’s owners are actually familiar faces.

While the details of this investment aren’t clear, logically, one would have to surmise that these celebrities purchased smaller stakes than 1% each—much, much smaller, actually. Because, assuming WME-IMG bought one hundred percent of the UFC (and they didn’t; the Fertitta brothers still have about 10% each, and Dana White and Flash Entertainment possess some ownership as well), that would mean they paid about forty million per percent. Once again, the actual number paid is greater than this because other parties own a portion of the company as well (and there’s an extra 200 million dollars to consider). The point is that all these celebrities, as a whole, probably own 1% or less of the UFC.

Thus, this seems like a risky investment, in my eyes—even for celebrities with money to spare. The WME-IMG paid a bit too much for the promotion, from my perspective, and if these individuals paid even more than they did, making money will be tough; there just isn’t that much profit to go around, especially in an era where fighters are looking to get paid like Conor McGregor.

Bellator featherweight champion Daniel Straus has been cleared for a return to the cage.

The reigning champion suffered a broken hand some time ago and hasn’t competed inside the cage since taking the belt from Patricio Pitbull last November.

Short and sweet, his return is phenomenal news. Bellator’s featherweight division is stacked to the brim with fighters like Pat Curran, Pitbull, Straus, Daniel Weichel, Bubba Jenkins, Georgi Karakhanyan, Henry Corrales, James Gallagher, and many, others. Getting the title picture moving again will only add to the class’s excitement.

Alexander Gustafsson’s injury prompted TUF winner Ryan Bader to fill-in opposite Lil Nog in Brazil, and on roughly six weeks’ notice, he’s about as good of a replacement as fans could get. This is a pivotal contest for both men.

Alexander Volkov vs. Timothy Johnson at UFN 99 on November 19

It’s great to see the former Bellator heavyweight champion Volkov in the UFC; if his wrestling improves, Alexander will be a contender. Moreover, Johnson is a legitimate and formidable competitor in his own right, and both men are ultra-exciting to watch.

Darren Stewart vs. Francimar Barroso at UFN 100 on November 19

Darren Stewart fights at light heavyweight and is undefeated—two characteristics that have seemed incompatible, in recent years! He’s likely facing the toughest test of his career in Francimar Barroso, though, and when this one’s over, a contender will emerge or a solid fighter will regain his promotional footing.

Krzysztof Jotko vs. Thales Leites at UFN 100 on November 19

This solid fight is a career-defining one for each man. If Jotko wants to contend for the belt, he needs to prevail, while Leites must do so to prove he belongs in the middleweight division’s upper echelon.

Justin Scoggins vs. Pedro Munhoz at UFN 100 on November 19

The sky’s the limit for these ever-improving flyweights. It’s almost a shame that they have to meet so early on in their UFC careers, but nevertheless, this should be a fun fight for the fans.

Claudia Gadelha vs. Courtney Casey at UFN 100 on November 19

This is a good strawweight matchup at a time when they’re sparingly seen, as it’s becoming harder and harder to keep both women’s divisions moving as more fights are booked, and new signees remain minimal.

Ledet is undefeated as a pro, and Godbeer, since losing to Cheick Kongo in Bellator, has compiled three knockout wins. This should be exciting.

The Swedish knockout artist, Hermansson, versus the well-rounded Brazilian and TUF winner who has been prone to knockout losses, Ferreira, is a stylistically and divisionally excellent match-up.

Artem Lobov is an Irish star who trains at SBG along with Conor McGregor, while Artem Ishihara is a streaking knockout artist fighting out of Sacramento, where he trains with Team Alpha Male.

The trajectory of each man’s UFC career will be defined by this contest.

The pressure is on for Meunier and Walsh here, as the loser may very well receive his walking papers. However, each man has been subjected to an unforgiving series of relatively difficult fights, and hopefully, this point will be considered before any cuts are made.

Jake Ellenberger vs. Jorge Masvidal at The Ultimate Fighter 24 Finale on December 3

This bout is an early Christmas present for fans, as two of the best welterweights on the planet will battle live and free. For Ellenberger and Masvidal, this is about as important as a fight can be. Both men have recently snapped losing streaks, but if they want to contend for the title and remain signed with the UFC, an impressive triumph here is ideal.

Khabib Nurmagomedov vs. Michael Johnson at UFC 205 on November 12

It may not have been the title shot he wanted, but Khabib has been booked opposite Michael Johnson at the UFC’s biggest event of the year. He, and his many fans should be cautious, however; Johnson is more powerful, explosive, and dangerous than ever before, and it appears as though he’s being overlooked, to some degree. 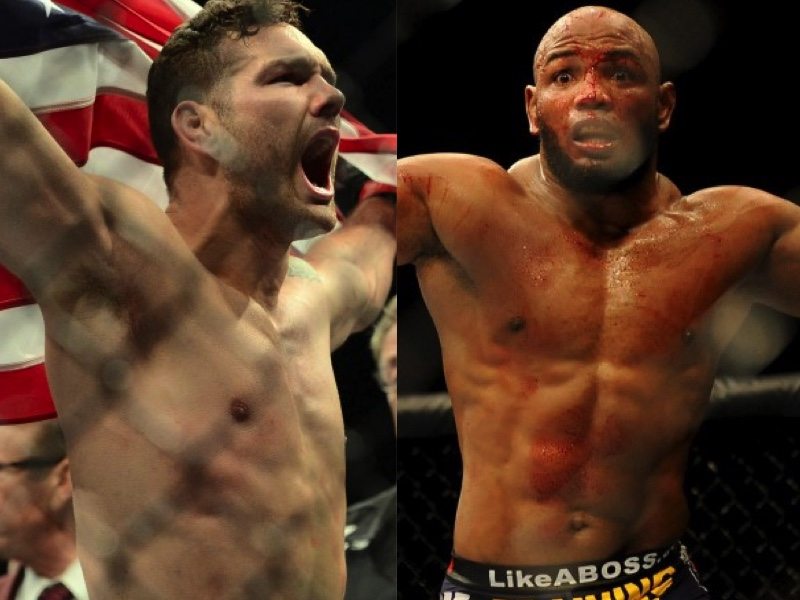 Chris Weidman vs. Yoel Romero at UFC 205 on November 12

Ultra-exciting on paper and certainly worth watching, this may be the contest wherein Yoel Romero’s technical deficiencies are finally exposed. With a win, though, he will fight for the belt. 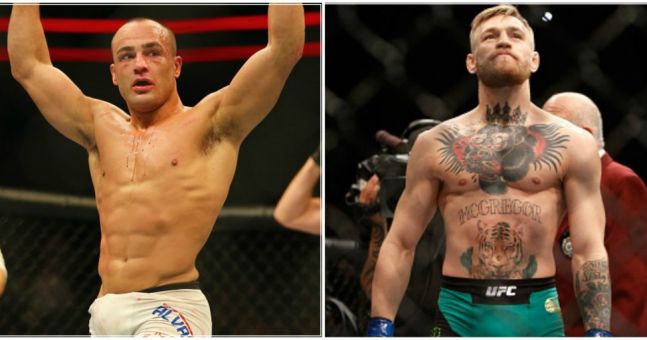 Conor McGregor vs. Eddie Alvarez at UFC 205 on November 12

Is it fair to hold up the featherweight division for this bout? Moreover, should McGregor be able to leapfrog every other lightweight waiting for a crack at the title?

Probably not, but there’s no denying that this is a fun, appealing, must-watch, and highly intriguing fight that is well-suited to headline 2016’s biggest UFC event. Even during the Khabib-Alvarez negotiations, I’ll openly admit that I was rooting for this contest to be booked.

Both men are coming off losses to tough opponents, and frankly, getting back in the win column will cement one athlete’s UFC roster space.

This week in MMA was pretty good overall, between all the fights and the bout announcements, and next week—which is populated by UFC 204 on Saturday night, as well as a fantastic World Series of Fighting 33 card on, thankfully, FRIDAY night—should be even better.

As usual, we’ll recap all the action then. Stay tuned!