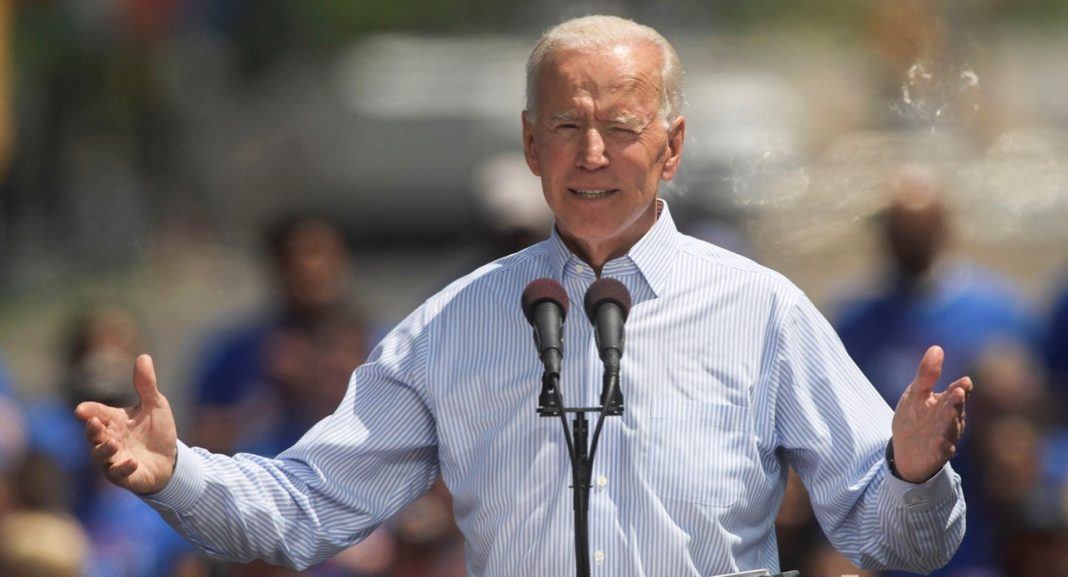 As Gay Pride month begins, former vice president Joe Biden and Democratic presidential candidate declared on Saturday that the Equality Act would be his top legislative priority. This is a long effort to enshrine LGBTQ protections into the nation’s labor and civil rights laws. Biden was the one who literally pushed Barack Obama to move on the marriage equality bill which was a huge step forward for the LGBTQ community.

While he was discussing this, Elizabeth Warren, Bernie Sanders, and Kamala Harris used his absence at a California state party gathering to begin attacking him. This is what Republicans expect Democrats to do so rather than wasting money trying to tear Biden down, they will let Dems do the job. Sadly, this is something they are very good at rather than focus that energy on becoming a united front.

Biden shared his hopes of signing the legislation as part of a keynote address to hundreds of activists at the Human Rights Campaign’s annual Ohio gala on the first day of Pride Month. In a half-hour at the lectern, his remarks ranged from emotional tributes to his audience and their personal endurance to condemnations of President Donald Trump.

“It’s wrong and it is immoral what they’re doing,” Biden said of the Trump administration. Among other Trump polices, he cited attempts to bar transgender troops in the U.S. military, allow individuals in the medical field to refuse to treat LGBTQ individuals, and allow homeless shelters to refuse transgender occupants.

“Just like with racial justice and women’s rights, we are seeing pushback against all the progress we’ve made toward equality,” Biden said.

The Equality Act would address many such discriminatory practices. It recently passed the Democratic-run House, but will not become law under Trump and the Republican Senate. That means LGBTQ residents in dozens of states are still subject to various forms of discrimination that are either specifically allowed or not barred by state law.

“It will be the first thing I ask to be done,” Biden said.

Biden spoke in Ohio, a political battleground he was visiting for the first time since beginning his bid, on the same day that more than a dozen of his rivals were in San Francisco for the California Democratic Convention and a massive MoveOn.org conference. By the end of the weekend, 14 candidates will have addressed thousands of activists in California, which has more than 400 delegates to the 2020 convention, about a fifth of what it will take to win the nomination.

“Some Democrats in Washington believe the only changes we can get are tweaks and nudges. … Some say if we all just calm down, the Republicans will come to their senses,” Warren said, an allusion to Biden’s recent prediction that Republicans will have “an epiphany” once Trump leaves office.

Biden made no mention of his rivals, with his go-it-alone itinerary and his message signifying his burgeoning confidence at his position atop the pack of 24 presidential hopefuls.

Campaigning in a Midwest battleground is no surprise for Biden. One of the prevailing arguments for his candidacy is that his moderate, deal-making, “Middle Class Joe” brand offers Democrats their best shot to win back the industrial belt that Trump wrested from the party in 2016.

Yet the HRC event offered both Biden and his audience a chance to go beyond that simplified framing of the 2020 landscape.

“The thing that gets overlooked when the story is written about Ohio and the Midwest is that we’re incredibly diverse,” said Shawn Copeland, HRC’s Ohio director.

Copeland said HRC has identified about 1.8 million “equality voters” in Ohio, including 400,000 LGBTQ citizens, plus their family members, friends and other allies. Trump got 2.84 million Ohio votes to Hillary Clinton’s 2.4 million in 2016.

Biden, meanwhile, used the forum to underscore his long alliance with HRC and LGBTQ activists — a key to Biden’s contention that he’s more progressive than the party’s left flank acknowledges.

The former vice president visibly enjoyed recalling the 2012 presidential campaign when he announced his support for same-sex marriage before his boss, President Barack Obama, had done so.

Biden recalled that most political observers “thought I had just committed this gigantic blunder.” He said he’d let Obama know beforehand what might be coming. “I told the president if asked, I was not going to be quiet.”

The rest of his remarks were less jovial, as Biden lamented the widespread discrimination that still exists in the U.S. and abroad. Noting recent killings of black transgender women, he roared: “It’s outrageous. It must, it must, it must end. The fastest way to end it is to end the Trump administration.”

He lowered his voice as he listed the percentage of LGBTQ children and teens who attempt or consider suicide. “I don’t have to tell you how hard it is for these kids, because many of you were these kids,” he said, “the terror in your heart as you spoke your truth.”

Several Democratic hopefuls have addressed HRC state dinners this year. National officials with the organizations say they’ve worked with the campaigns and the state organizations to schedule the occasions.

A Biden campaign statement issued before the speech said the choice to go to Ohio proves Biden wants to have conversations about LGBTQ rights “not just on the coasts of this country, but in the heartland and with any and all Americans.”

The venue also allowed him to push back, at least indirectly, at some of the jabs from California. He reminded the audience that he campaigned for many of the freshman House Democrats who helped the party to a net gain of 41 seats — mostly by winning swing or GOP-leaning districts.

“We didn’t have to be radical about anything,” he said. “They talked about basic, fundamental rights.”

With the resulting House majority, Biden noted, the Equality Act has gotten further than ever before.

Democratic presidential hopefuls took rival Joe Biden’s absence at a California state party gathering Saturday as a chance to take subtle digs at the former vice president and craft themselves as better positioned to bring Democrats into the future.

“Some say if we all just calm down, the Republicans will come to their senses,” Massachusetts Sen. Elizabeth Warren said in a clear reference to Biden’s comments that the GOP may have an “epiphany” after President Donald Trump is gone. “But our country is in a crisis. The time for small ideas is over.”

Warren was one of 14 presidential contenders in San Francisco for a three-day gathering of the California Democratic Party, featuring thousands of fervent activists. Biden was the only big-name candidate to skip the gathering, opting instead to campaign in Ohio. That allowed Warren, Vermont Sen. Bernie Sanders, California Sen. Kamala Harris, and others a chance to grab the spotlight.

California has shifted its 2020 primary earlier on the calendar, to March 3, part of the Super Tuesday collection of contests, in hopes of giving the state more sway in choosing the party’s nominee. California will offer the largest delegate haul, but it is a notoriously difficult state to campaign in, given its massive size and expensive media markets.

“Joe Biden’s very familiar to Californians. He spent a great deal of time in California,” Newsom said, a remark that highlighted Biden’s advantage when it comes to name recognition.

Biden, speaking to thousands of activists at the Human Rights Campaign’s Ohio gala Saturday night in Columbus, didn’t mention his rivals but blasted Trump and his record on LGBTQ issues. He indirectly answered the criticism that he thinks small by noting that the Democratic House recently passed the Equality Act, which would enshrine LGBTQ protections in U.S. civil rights law. Biden said that Democrats had the majority because they were able to win in moderate and Republican-leaning districts.

“We didn’t have to be radical about anything,” he said. “They talked about basic, fundamental rights.”

In San Francisco, Warren’s remarks served as the most direct jab at Biden, but 37-year-old South Bend, Indiana, Mayor Pete Buttigieg seemed to draw a contrast with the 76-year-old Biden when he said Democrats won’t win if they bring more of the same to the 2020 contest.

“The riskiest thing we can do is play it safe,” Buttigieg declared. “There’s no going back to normal.”

U.S. Rep. Eric Swalwell, a Californian who remains at the bottom of the pack, also referenced Biden as he said “we don’t need a crime bill — we need a hope bill.” Biden has taken heat from some rivals for his support of a crime bill in the early 1990s that critics say spurred mass incarceration.

One of those rivals is Harris, though she made no direct or indirect references to Biden during her Saturday morning speech, instead highlighting her policy plans and bringing the crowd to its feet with calls to begin impeachment proceedings against Trump.

Harris received the prime spot of speaking first Saturday and sought to flex her home-state muscle by referencing her near-decade as a statewide elected official. Her campaign even emblazoned the official convention lanyards that thousands of Democrats wore all weekend with Harris’s name.

“The thing I love about California Democrats is we are never afraid of a fight,” she said. “And we know right now we’ve got a fight on our hands.”

Warren and New Jersey Sen. Cory Booker received perhaps the most enthusiastic response from the crowd, drawing people to their feet on multiple occasions. Warren reprised her “I’ve got a plan for that” slogan to raucous cheers as she pledged bold action on a variety of topics, including breaking up “big tech,” a strong rebuke in the home of Silicon Valley.

“Some Democrats in Washington believe the only change we can get are tweaks and nudges — if they dream at all, they dream small,” she said.

Booker was the only candidate to reference Friday’s fatal shooting in Virginia Beach, Virginia, which left 12 people dead. Declaring he’d have plenty of time to talk about himself, he told the party that the election is about more than finding a “savior” and simply beating Trump.

“It can’t be the call to beat Republicans. It must be the call to unite Americans in common cause and common purpose to tear down the injustices that still exist,” he said.

Most candidates sought to bring California-specific elements into their speeches or burnish their liberal credentials. Former Texas Rep. Beto O’Rourke slipped seamlessly between Spanish and English, a key move in a state with a large Hispanic population, while Washington Gov. Jay Inslee highlighted his fight to raise the minimum wage and enact aggressive policies to fight climate change.

But Colorado Gov. John Hickenlooper took a different tack, eliciting boos when he declared “socialism is not the answer” to enacting progressive policies and beating Trump. Hickenlooper quickly highlighted the negative reaction on his Twitter account: “I know this message won’t be popular with everyone in our party. But the stakes are too high. We cannot hand this election to Donald Trump.”