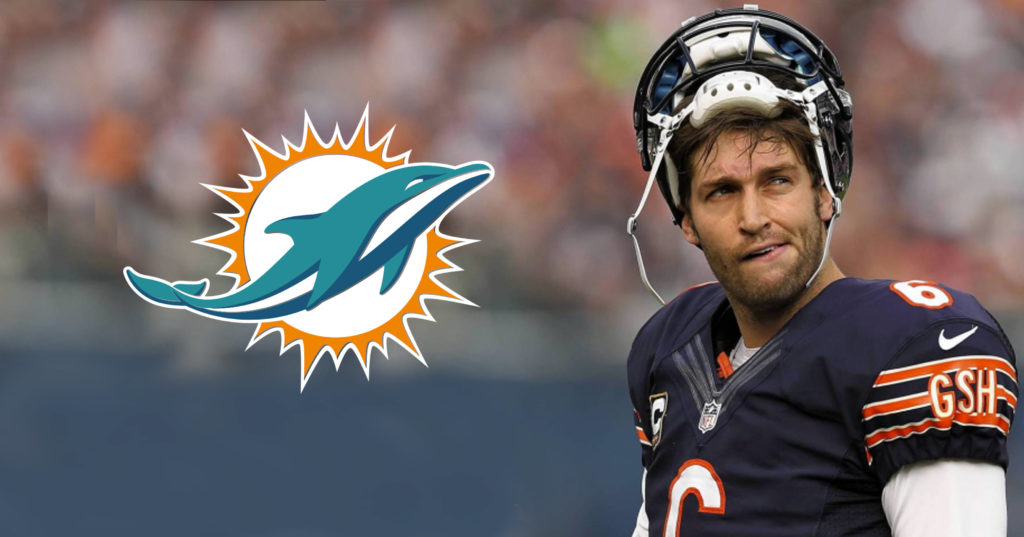 UPDATE: It seems that Jay Cutler is suddenly interested in playing football again. Well, maybe getting paid $10 million plus up to $3 million in incentive for one-year is motivating him. Now that it looks more than likely that starting quarterback Ryan Tannehill will be undergoing surgery to repair stretched ligaments in his left knee, getting Cutler onboard took priority.

Former Chicago Bears quarterback Jay Cutler never seemed overly interested in playing football during his time in Chicago. We’ll still need to see how long his excitement for his job at FOX Sports as an analyst lasts, but Cutler may be putting the job on hold for another shot in the NFL. That is, if he can get excited about it.

The Miami Dolphins are in a tough situation. Starting quarterback Ryan Tannehill went down with a non-contact knee injury, and while the Dolphins still aren’t 100 percent certain of his condition, a season-ending knee surgery keeps looking more and more likely.

Now, head coach Adam Gase needs to find a new QB before opening night. While there was a rumor swirling that Colin Kaepernick might be that guy, Gase now seems to be leaning towards his Cutler, who he coached in Chicago. At first, Cutler seemed interested in playing one more season if he had a guaranteed starting spot, but he is now reportedly leaning towards sticking with his cushy analyst job (you know, one that doesn’t come with the added risk of concussions).

Gase admits that he hasn’t spoken with Cutler much yet, but he also seemed to have very little idea of the situation his team may be in.

“When I get there, I will be able to tell you, but I don’t think it’s close to anything,” said Gase. “Like I said, I’ve had one conversation with him. That’s where we’re at. I’m dealing with this [team] right now. When I know more, hopefully within the next few days, I will have a better idea of what’s going on.”

Nonetheless, Gase won’t be too surprised if Cutler does indeed turn the job down. After all, you know things are pretty dysfunctional when even the head coach is willing to admit that the team is in a pinch.

“He’s interested,” said Gase. “But we’re just trying to figure out everything. You don’t expect this to happen. I don’t think he looked at our situation. He was surprised, and he has things to work through. I know I need somebody either way. I’d like to know exactly with Ryan first. So that helps me make a decision with what direction to go.”

I’m not exactly sure why Gase would want Cutler in the first place. Sure, they need someone to come in and help if Tannehill isn’t able to be their guy this season, but is Cutler really the best option out there? Hell, I’d probably even take a Colin Kaepernick with something to prove over a 34-year old that hasn’t performed well in a few years.

The most interesting part of it all to me is that Gase was Cutler’s offensive coordinator through those well-below-average seasons. He was the one calling the plays. So what exactly would change if the two teamed up again in Miami? The duo would be without Brandon Marshall and Alshon Jeffery. If anything, you would think things would be even sloppier.

Fortunately, Miami has some options. It’s a pretty cool city to play in, and if you’re a free agent anyways, then it’s a great deal.

“We’ve had a lot of people call us; we’ve talked to a few people,” said Gase. “We’re keeping all our options on the table. A lot of the things that are out there aren’t really what we’re doing. It’s kind of funny to watch.”

Kaepernick may get his shot after all. Or maybe they’ll go for a witty veteran. Either way, I wonder how Ndamukong Suh feels about the length of his contract now?