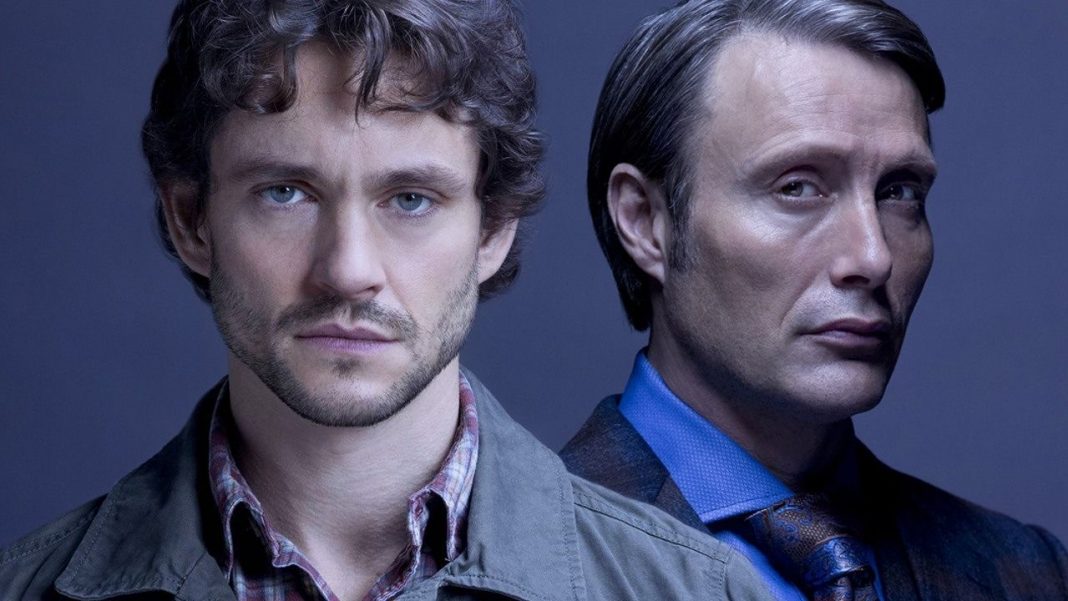 What a horrible week its been for us Fannibals. In a scary foreshadowing event, I wrote that if they didn’t pick up the pace on Hannibal the show might face cancellation. It was then revealed on Monday (of all days) that the show is officially canceled on NBC. Well, Hannibal fans turnt up! Now Amazon and Netflix are expressing genuine interest in continuing Hannibal’s bloody reign. It would be a dream to see this show on Netflix! Especially with this episode being so intriguing. Don’t be sad though Hannibal, there might be some life in it left!

The episode of Hannibal “Aperitivo” was definitely one this season really needed. The show saw the return of many characters. The return of Dr. Chilton was a big surprise. I mean who didn’t believe when Miriam shot him in the face that he was completely done for? The episode begins with the flash back of Miriam shooting Dr. Chilton in the face. It was extremely artistic and graphic, something that makes the show the standout that it is. Chilton visits with the now horribly disfigured Mason Verger. If you forgot, Verger was drugged by Hannibal and made to maim and cannibalize himself. Needless to say, Mason hates Hannibal just as much as Chilton does. In order to to know if Chilton is really genuine or not, Mason asks for them to exchange injuries. Chilton then proceeds to “strip down” his face to show Mason the full extent of his injuries. Chilton is seriously messed up. He’s got a foggy grey eye, a bullet hole in his cheek and toothless gums. Mason’s injuries, while horrible are not nearly as scary. Oddly enough, he looks like the pigs he use to feed people to. Poetic Justice for sure. Mason reveals that he has a $1 million price on Hannibal’s head and that he knows how to draw him out.

We find out that when Will saw Abigail visiting him, it is actually Dr. Chilton. As Chilton tries to convince Will to work with him to find Hannibal, Will finds himself increasingly uninterested. Then, we see Will escape in to one of his dream sequences again where he envisions himself and Lecter brutally murder Jack Crawford. When Jack checks on Will to make sure they keep their stories straight about their terrible injuries, Will makes a very surprising revelation. He tells Jack that he called Hannibal because he was his friend and he actually considered running away with him.

The homoerotic tones have been growing between these two every week and it seemed to explode in this episode.

The only character’s fate we’ve yet to find out about is Alan’s. I thought for sure now she would be dead after being hurled out of a second floor window. However, we find out that she’s alive and we see her laid up in a cold hospital bed with pins holding her spine together. Chilton visits her to get her riled up in anger towards Hannibal. Since Alana was literally Hannibal’s lover, it’s safe to say that she might be feeling the most betrayed right now. She’s clearly done playing nice and wants a piece of revenge for herself.

Alana finds Will sitting in Hannibal’s home and he dismisses her quite rudely after wanting to be left alone with his sick memories. Alana then goes to visit Mason who reveals he has found Jesus and Jesus has told him he has the strength to kill his enemies. Um, ok?

Whatever his crazy ass believes, Alana is down for the cause of getting Hannibal.

This week’s story line of Jack and Bella nearly brought me to tears. As Jack’s wife Bella laid dying of cancer, she finally convinces Jack that he should mercifully put her out of misery. In the end, in a beautiful sequence, he does. At the funeral, Jack discovers a note by Hannibal on casket.

I found it sick and real proof that Hannibal is a twisted sadist in more ways than one. Jack is confused about how he should take the note when he is hit with Chilton giving his “let’s get Hannibal speech.” Will then approaches Jack at the funeral where he tells will, “You don’t have to die on me either.” Jack feels like he is losing everything and he doesn’t want to lose Will as well even though he sees him going down a slippery slope.

The audience then gets to see the twisted Mason again as he’s being treated by his nurse Codell who is clearly much more than a nurse. Mason expresses to Cordell he wants Hannibal to b eaten alive. Alana tells Mason that even though Hannibal’s name might have changed, his tastes clearly haven’t. That is how they will track him.

When Jack goes to visit Will’s house, he finds Alana there instead. She goes on to tell Jack that Will is gone and knows what he must do now. The last scene is where we see Will sailing off on his boat to Europe. Even though Will is boarder line in love with Hannibal, he still knows that he must bring the monster to justice.

This episode was much like old times. The dialogue was sharp and intriguing while the suspense constantly kept coming. Now that we know how the whole lot got to Europe, I want to see some bloodshed. I’m so glad to see Alana wake up out of her completely naive trance, even if that meant her being thrown out of a second-story window. This episode renewed my love for this show and whether it ends this season or not, I think we’re in for a very exciting ride.