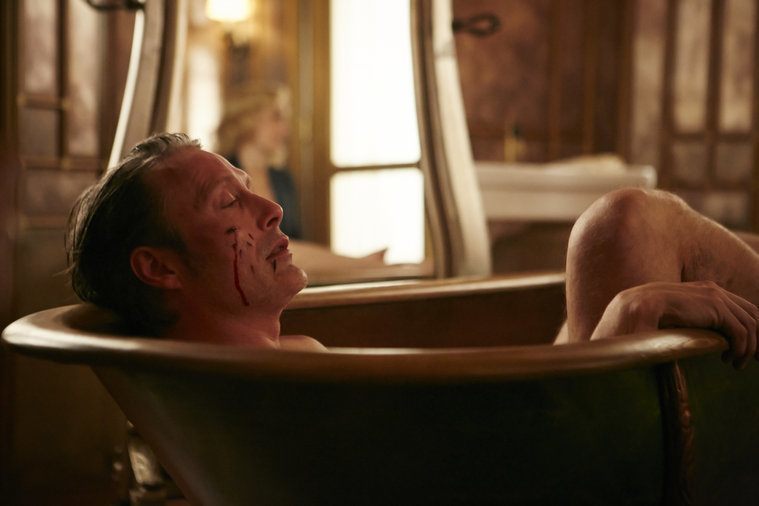 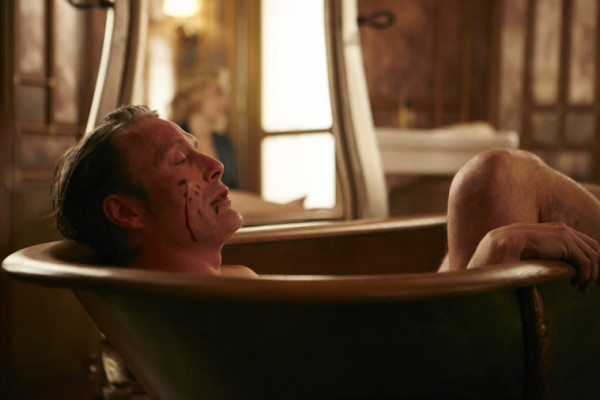 NBC and Amazon are quickly becoming a fierce enemy of mine. If you haven’t been keeping up with the ever changing “Hannibal” drama, here is what’s fresh on the block. At the Hannibal comic-con it was revealed that Amazon is not picking up the show because they wanted Bryan Fuller to complete an entire season in 6 months. I mean really, have they seen this show? It is so beautiful and well-crafted that it is impossible for something so amazing to be produced in just 6 months. Netflix can’t own it because their rival Amazon owns it. Why Hulu is not flying in to rescue them I don’t know. What is encouraging is that Bryan Fuller says he’s trying to get Hannibal back on the silver screen. That would be amazing as the entire series just screams to be on the bog screen!

And now NBC won’t let it die with dignity. They’ve banished it off to Saturday  night which is a horrible night for television and replaced it with another completely unnecessary episode of deadline. If I didn’t like Grimm so much I’d boycott NBC all together. But trust, I won’t be watching anything by them anytime soon! 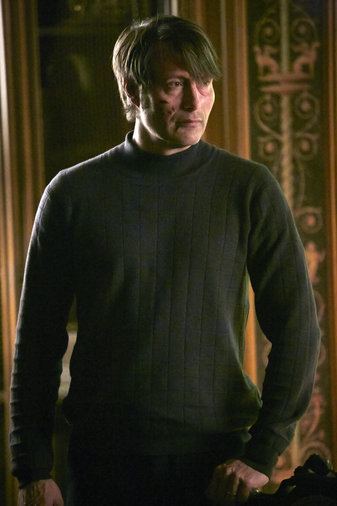 This episode had many shocks and surprises throughout and was truly an edge of your seat episode. It was sexy, gruesome and stylish (as usual). Beat up and scrambled, Hannibal arrives back home to where Bedelia is seen cleaning him up. Bedelia springs a surprise on Hannibal even I didn’t see coming. She informs him that this is where she leaves him. I didn’t think Bedelia had it in her to pull away from Hannibal so boldly, but she does. Hannibal is sad because he intended to say good-bye to Bedelia by cooking and eating her. Bedelia has already figured that out, that’s why she’s trying to get the hell out of dodge!

I was shocked that after all they’d been through he was still going to eat her! You can never, ever truly trust Hannibal though! 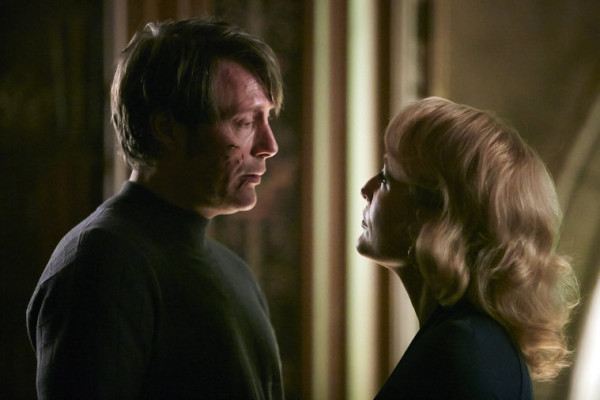 Will and Jack come together at the scene of Pazzi’s murder from the previous episode. As much as I love this show, I find it completely ridiculous when Jack confesses he didn’t kill Hannibal because he needs Will to do it personally. Seriously? That’s ridiculous. Jack kicked Hannibal’s ass and would have been more than willing to kill him. But, it keeps the strange friendship between Hannibal and Will alive so we’re forced to go with it.

We’re then taken to the even more twisted world surrounding Mason who is preparing to eat Hannibal. Him and his twisted therapist and assistant Cordell practice eating Hannibal’s finger tips by consuming pigtails. Really, if you need to practice consuming another human being you’re even more twisted. Mason awakes from a lovely dream of eating Hannibal, glazed duck style, to find himself surrounded by Alana, Margot and Cordell. They inform him that Pazzi failed miserably to capture Hannibal.

In one of the most twisted scenes of the show, Margot goes to Mason and explains they have secured the entire Florence police force. Instead of just giving a normal thank you, he starts to rant about how he regrets sterilizing her for sleeping with Will. He wishes they could have a baby together and his twisted ass really believes he would make a good father. I was just sitting there with my mouth hanging open as this guy is pure psychotic.

What followed was an even more shocking and head spinning sex scene between Alana and Margot (surprise!). Toning down the kaleidoscopic effect would have made it easier to appreciate how beautiful the scene was. Sometimes Hannibal gets a little too artsy for it’s own good. After the passionate session, Alana reveals to Margot she plans to turn Mason in to the FBI once Hannibal is captured. Margot does ask Alana the strange question of whether she knows anything about sperm harvesting. A mighty strange question to ask; Alana doesn’t respond.

Chiyoh and Bedelia come face to face as Bedelia prepares to get high on some untold drug. The women bond over being held captive by Hannibal. Chiyoh explains she is concerned that someone (referring to Will) is trying to kill Hannibal. At that, Bedelia realizes Will isn’t Hannibal’s biggest mistake, it was crossing Chiyoh. 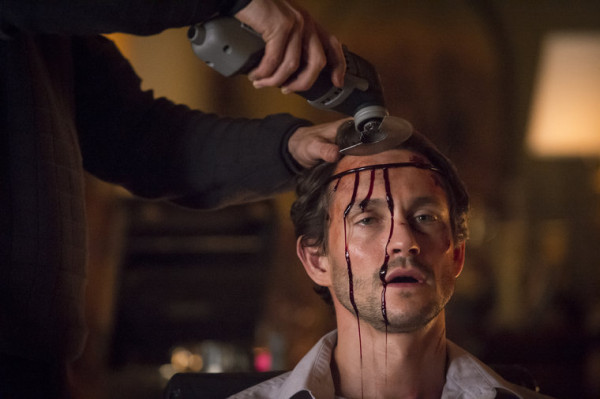 After getting extremely high, Badelia answers the door with Will and Jack standing before her. She tries to convince them she honestly believes she is Lydia ( the woman’s identity she assumed). They don’t believe, it however, we do find out this is the same mind altering drug Miriam Lass was forced to take. As long as Bedelia continues to shoot up she will remain lost in her memory. Will sneaks off only to find Hannibal sketching at a nearby museum. The homoerotic tones seep in again as they virtually exchange I love you’s. Hannibal and Will walk out of the museum side-by-side when it is revealed that Will has a blade. Will is then shot in she shoulder by a hiding Chiyoh with a sniper’s scope. 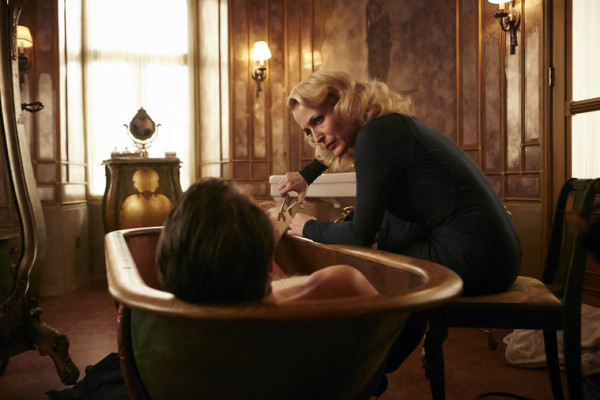 Will wakes up totally at the mercy of Hannibal with him dressing his oozing wound. It’s no surprise that Will has walked right in to a damn trap! He’s drugged and then wakes up at a dinner table. Will notices there are 3 place settings and they wait for the third guest to arrive. As Jack finally shows up after sharing a strange elevator ride with Chiyoh, he also falls victim to Hannibal’s trap as he spots Will tired to the chair, but then quickly has his Achilles Heel sliced.

Jack then also wakes up at the table tied to a chair. Hannibal then takes a small saw and puts it to Will’s scalp as Jack screams in horror! I screamed too as I just did not see that coming! Will begins to pass out as he has his scalped removed only to wake up hanging upside down beside a slew of pigs…..and Hannibal Mason rolls his evil self in and welcomes them into Muskrat Farms!

This episode was filled with exciting twists and turns along with plenty of blood and gore. Now that Hannibal AND Will are both in the crazy clutches of Mason, what kind of craziness will ensue in next weeks episode (sadly thrown on Saturday night as an after thought)?