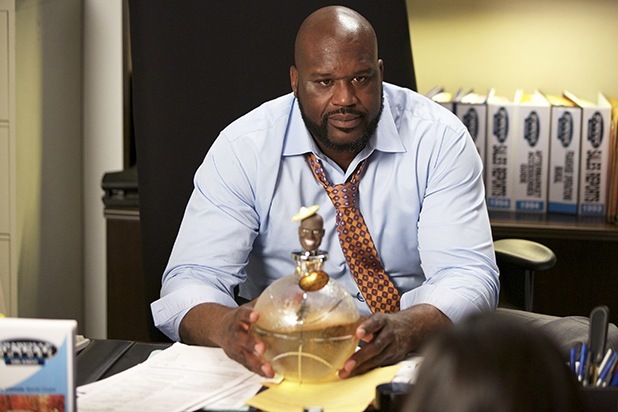 This week on Fresh Off the Boat, Jessica and Louis deal with the ups and downs of married life and raising three Asian boys in Orlando… as they always do.

Louis is set on being a cool dad and a good husband as he toils over what to get Jessica for their 12-year anniversary. He believes he has the perfect gift as he and the boys look back over the gifts he’s gotten her over the years. Being that she is difficult to shop for, he plans on giving her the romantic experience they had on their wedding day- buying their family mini van. So he plans to recreate the magic by buying a second car, which is what they did on their wedding day. Sweet.

As he takes Jessica to buy the car (which she has no idea they are doing) he tries to keep it romantic, and tell his sons, “don’t wait up boys we’ll be gone for hours.” This serves as the perfect time for Evan, the youngest, to throw a party… a tea party… that he invites his brothers to.

They meet Evan in the yard and as they begin, two of the neighborhood power walkers come by and see his collection of beanie babies who are all guests at the party as well. They are impressed with it and one of them offers to buy the white union for $10, as she collects them too. The other lady blabs her mouth that that particular one is worth a fortune and can fetch real money down at the mall. This gives Eddie and idea.

He later that day dreams that Evan tells him it’s okay to sell his collection of beanie babies, so he does and buys the hotdog slip and slide that he wanted so badly.

Meanwhile, Louis and Jessica make their way to Shaquille O’Neal Motors and Jessica seems to almost have a panic attack. She looks a little flustered, and Louis tries to get her excited by telling her that she gets to negotiate just like she did on the night of their wedding. When the salesman comes out to greet them, Jessica is no where to be found. For whatever reason, she high tails it out of there and Louis is left looking cray, cray.

He looks everywhere and finally finds her in a bar, sulking. She tells him to sit down. “there is something I need to tell you.” She tells him that on the day of their wedding, she opted out of the free floor mats which to her means that she messed up the first thing that they did as husband and wife. She refers to it as the biggest mistake of her life, which is kind of weird because come on, it’s only floor mats. Louis then walks out disappointed because to her it was the biggest failure and to him, it was the first time they signed their name together.

When he gets back to the house, she has bought flowers, real flowers (you know she’s super cheap) as a way to apologize to him. He went ahead and bought the car without her. She goes outside to see it and is very impressed. That is until Louis tells her how he paid sticker price, “and not a penny more.”  Her eyes go dim and it’s like a tiny fire burns in them, as she can’t believe he didn’t try to pay less, which is, of course, what she would have done.

Scene switch to them back in the dealership and Jessica giving the keys back to the salesman. She realizes Louis paid sticker price just so she could come back down through the doors she vowed never to enter. He picks her up like he did on their wedding day, carries her into the dealership and she declares, “we want to buy that car…. Again.”

Baffled, the salesmans feels a certain kind of satisfaction seeing them come back in. “Buyers remorse” he tells them. Little does he know these two are pros and they actually do a test drive, in the same car that they bought and returned, with him in it… to Tampa. Then, they go through every “manager” in the office and get it down to a price they can deal with. Just as they are about to sign it, Jessica realizes, based on how the last salesman is acting, that he has a manager. They work him over and come to find out that the top man, the man in charge, the man who has the final say… is Shaquila O’Neal himself.  Shaq is actually a great comedy actor here. He’s entertaining and engaging and steals every scene he’s in. They get the price down and he throws in one of his shoes’ signed and everything.

They return home and give it to Eddie who can’t believe what he’s holding. As he thinks about how much it means to him, he realizes that Evan felt the same way about his beanie babies and sells his shoe to buy his brother’s collection back. Awwww, such a good brother.

Everyone gets what they want and the Huang crew keeps it moving.