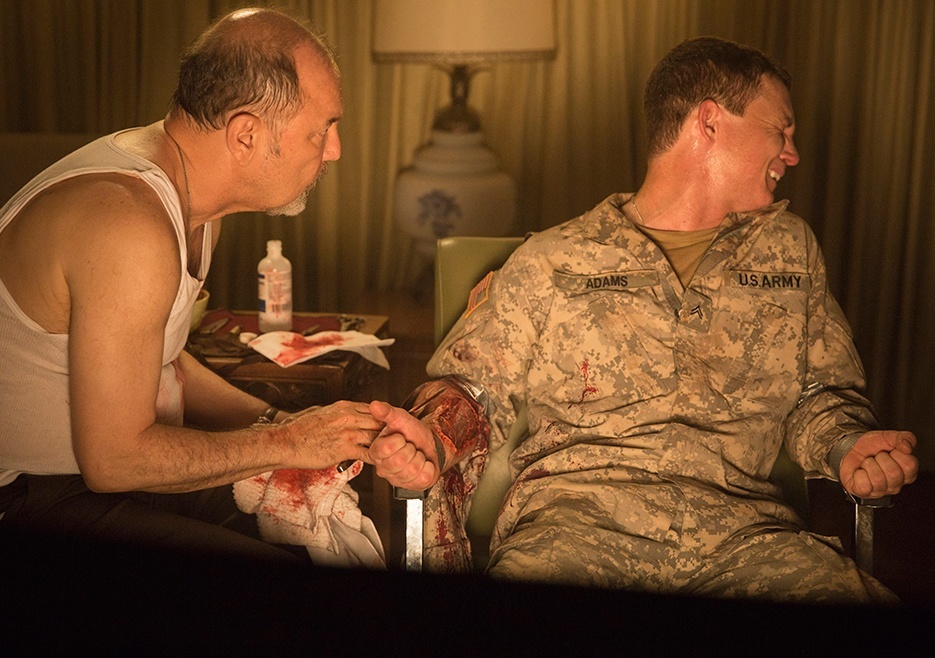 Well we got a look at the military headquarters this week on “Fear the Walking Dead.” It was about what I had expected, a basic detention center. A death camp if you will. Crazy Doug is pinned up with a salesman who is a little off himself, but seems to be pretty shrewd as well. Doug is a sobbing mess and sales guy isn’t helping the situation by telling him how Dougie’s wife will be OK if she trades her body for protection during this apocalypse.

Just what you want to hear while sitting in a cage. Little Nick is in the same cell that is apparently for those with loose screws or drug dependencies.

Back at the subdivision, Ofelia Salazar is tripping. She has commenced throwing bottles and bricks at the fence, shouting at the military patrol there. She wants to see her mom and she is pissed! Her “boyfriend” soldier tries to calm her down to keep the peace. It becomes apparent these soldiers are stressed to the max and dissent is setting in as well.

Chris is upset with his mommy being gone so Travis has to handle him, not to mention Maddie is still not pleased with her dope head son being snatched up by the military. Travis could use a vacation. Dealing with a zombie uprising and all these family issues has got to be taking a toll on the guy. I imagine alcoholism would rise greatly in a real national meltdown.

We later see Travis trying to get the military commander to bring their people back. Silly request. Lt. Moyers is all business and besides, he had the people taken in the first place. He’s not just going to change his mind. He does tell Travis he will take him to headquarters to see his people though.

The Lieutenant tells Travis, “I can do anything I want to, I’ve got guns.”

Daniel Salazar has taken matters into his own hands and plans on getting his wife back with different tactics. Maddie finds Salazar and his daughter in the basement with her boyfriend soldier tied to a chair. This is going to go badly for all involved I would guess. I know it’s going to end badly for the young man duct taped to a chair by a barber with lots of sharp instruments.

It doesn’t take long for this National Guardsman to spill the beans. He tells Daniel lots of information long before any torture has begun. Kid just wants up from that chair.

Travis’ trip to the medical center / death camp is quite an adventure. These soldiers have made a sport out of killing the walkers. Lt. Moyers forces Travis shoot a poor bug eyed walker they spot during their drive. He is about to go through with it, but backs out when he sees the girl’s name tag. Travis can’t get over the fact that these creatures are, or at least were, humans.

It seems like there should be more walkers around than we are seeing. If not more walkers, more survivors. Maybe they are all concentrated in the downtown area where the riots were happening.

Daniel is getting plenty of intel from his hostage. The young man has been sliced up pretty good by the brutal barber and has told him about some nasty duties he and his fellow Guardsmen have been a part of. “Cobalt” has been a big keyword on the radios and Daniel wants to know what it means.

While the adults are getting stuff done, the kids are playing dress up. Chris and Alicia are going through a nicer home in the neighborhood and eventually start smashing all the nice vases, china, and destroying the entire interior. This beautiful home is wrecked in a hurry, just like the society these teenagers were a part of just weeks ago.

I don’t know what the salesman, Strand, thinks he is getting by saving Nick from being tossed in the sickly area of the medical facility. He thinks he is obligating Nick to help him when the time comes, but we have seen Nick is just out for himself. But Stand thinks being a heroin addict is going to be useful. It may well be in a weird way since the drug addict is good at sneaking around and getting in and out of places to get his fix by stealing.

Travis’ little road trip ends when the reckless soldiers get over run and two of them leave their buddies behind. They tell Travis they are headed out of town to their families and will drop Travis off near his house.

Oh and Cobalt is the code name for an operation that has the military evacuating the area the next morning. Just the military! All the civilians will be left behind, at best. Terminated in a humane way, at worst.

Liza finds Griselda Salazar with her foot whacked off and very sick with septic shock. Mrs. Salazar is rambling about the devil and maybe God too as death approaches her. Once she expires, Dr. Exner brings out the live stock killing tool. Daniel is not going to be happy about his soul mate being killed like a dimwitted cow. It might make him do some real nasty stuff…..well he’s already crossed that bridge.

The episode wraps with Daniel coming up on the arena where so many walkers are locked inside. The soldier had told him about how they locked over 2,000 infected folks in there when things got out of hand. Inside were people not yet sick too when the military locked them in. It’s a bad scene behind those doors.

I’m not sure if that was Staples Center or not. Seems like there would be more than 2,000 people in a place that big, but it sure resembled it.

Next week will wrap up the first season of Fear the Walking Dead. I’ve enjoyed this mini season. I don’t know if these characters can stand up to the standard set by Rick Grimes, Michonne, Carol and Daryl in the original WD series. But to be fair it took more than one season for these characters to develop into ones that we know and care about.

It’s hard to see Travis being the leader that Rick is, but Rick went through quite a bit to become the type of man willing to go to any extreme to keep his people alive.

The rest of the characters do have me interested with their diversity. A barber with no conscience, a heroin addict, and newly introduced slick salesman are just a few people that will make this series compelling.

See ya next week for the finale and be nice to your hair stylist.