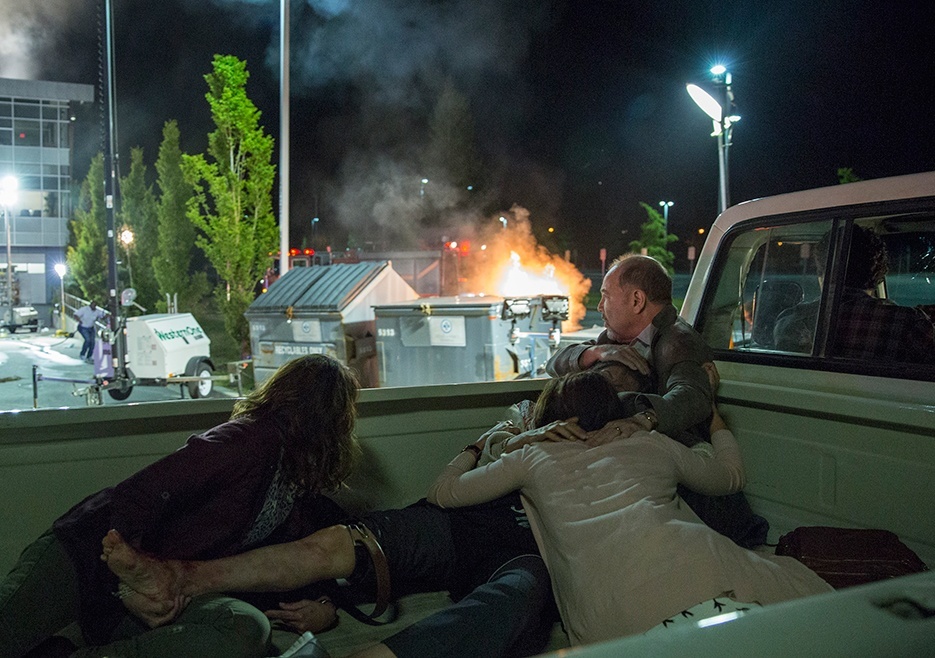 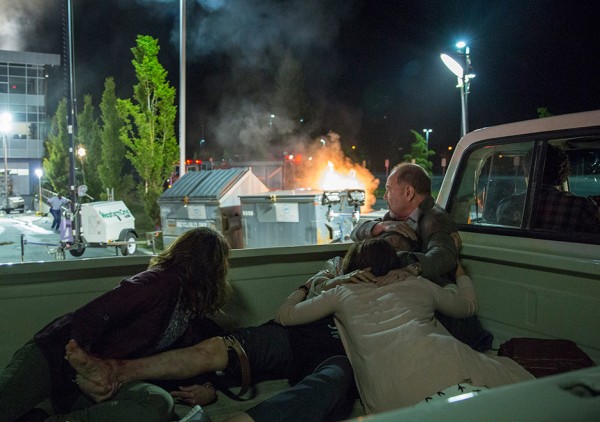 Okay, who else would have traded dope fiend Nick’s life for that German Shepherd that got eaten alive? Nick is a POS and that dog would have been much more valuable to the group that’s trying to stay alive.

Fear The Walking Dead opened up in the Salazar barber shop, just where we left off before the Labor Day break. It didn’t take long for Chris to start whining in this episode. Hearing him mumble “dad…..dad…..dad,” repeatedly showed us his weak nature. And he’s depending on Travis, who didn’t exactly show his strength this week.

After the barber shop begins to catch fire from next door, the Salazars and Manawas have to enter the fray outside. The full blown riot outside is worse than most TRU TV episodes, but the group manages to make it to the truck. Mrs. Salazar gets her foot mashed in the process so she’s not long for the show. Most Podiatrist have been killed by now I bet.

They swing by the hospital which is overrun with sicklys. A serious virus would turn bad faster due to the fact that the violent patients would infect the people most able to help…the doctors.

Nick is not only a drug addict, he doesn’t have a loyal bone in his body. He is ready head off to the desert to leave Travis behind. Also it is really silly for he and Maddie to keep the zombie secret from Alicia. She’s not a baby and is going to find out sooner or later.

Looking for a weapon once they see their new undead neighbor is a good plan, except for the fact that they have no weapon experience and are likely to shoot each other on accident.

Mr. Salazar is a man of action. Good thing too. Travis thought he was a walker whisperer as he tried to talk down his bitten neighbor. Sal ended the confrontation with a shotgun blast to the head that ruined some curtains but saved Travis’s dumb ass.

Travis wants the world to be as it was. Salazar accepts what is. His approach is better suited for this disaster clearly.

Travis talks about how his friend didn’t deserve being shot and wrapped in a tarp. Deserve has little to do with reality, especially in their jacked up world.

Little Chris has enough sense to take some gun lessons from old man Salazar, but Travis isn’t down. “You know how I feel about guns,” he says. I wonder how he feels about being eaten alive?

Travis is a good man, but is going to be an anchor to his family if he doesn’t evolve quickly. I get that he was waiting in line to get a $6 latte at Starbucks just a few days ago. But things are very different and he best accept it.

Back to POS Nick. He is actually mad at his mom for giving some of his pills to Mrs. Salazar who nearly had her foot mashed flat. The ball peen hammer Maddie wanted to use on her zombie friend Susan would be better suited for Nick. He is a waste of flesh at this point.

As the show wraps up, Travis and family head to the desert, leaving the Sals behind just like the old barber wanted. Maddie got sidetracked when she saw Susan’s husband come home. She tried to warn him his wife was not safe to be around, but was a little late as he went in for a hug. Lucky for him the army had arrived on the scene and blew a hole in his soulmate’s head.

That’s not usually a positive event, but it saved this poor bastard’s life.

I guess Travis thinks the military presence is going to fix all the shit that has hit the fan. He says, “Things will get better now. The cavalry is here.” He’s way off base. The military is a wide blade when it comes to fixing problems. Things are going to get worse, much worse.  Salazar knows it too.

I’m not sure what the group’s next move will be. The army guys told them to stay close by so it looks like the desert is out for now. You would think there would be at least one doctor or nurse with the military group. Mrs. Salazar sure could use the help.

The show is setting up a confrontation between Salazar and Travis. Both good men, but only one is willing to do the dirty work, at least at this point early in season one.

As ill prepared as this group is to survive riots I doubt we’ll see them in big groups of people very often going forward. They have been lucky to survive the random wandering walker neighbor, much less another riot situation with walkers, gangs, and panicked police.

We’ll see what happens next week as things continue to break down, both in the macro and in the small group we are following.