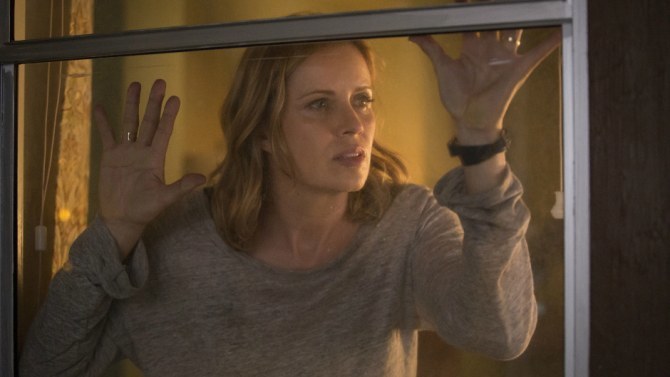 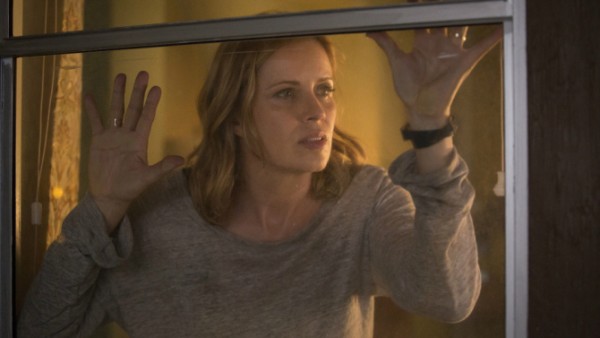 Things kind of looked like some form of normalcy had come back in this week’s “Fear the Walking Dead” as we saw Chris lounging in the pool and Travis going for a jog. Not exactly. That is unless you consider martial law and your subdivision being enclosed in a fence normal.

A little bit of mystery this week as Chris is video documenting what’s going on as the army makes its passes through the neighborhood. He sees a flashing light out in the distance past the fence where the army says there should be nobody.

Not sure how the army would say there’s no life out there. So nobody survived in the whole state except for the 12 safe zones mentioned later in the show? That’s kind of hard to believe. Actually it can’t be true, because somebody is signaling from the other house!

During a zombie apocalypse is not good time to bicker with your significant other. We see Travis and Maddie having a little bit of a spat and Alicia finally tells them to stop acting like everything is normal with stupid little arguments. This girl gets it. She understands just how bad things are.

Travis is trying to act like everything’s fine and going to be ok now the army is in town. That’s not anywhere near the truth.

We get a closer look at the army leader as he’s giving his morning update to the community. He asks them for cooperation and gives them some limited information. He’s not big on Q&A sessions. At the end of his little speech he says “Be nice so I don’t have to shoot you.” Good advice. These people should take it.

Imagine you’re in a disaster like this and army does move in to help. That help can be a double-edged sword. Before, you could go out past dark, use the power whenever you wanted to, etc. But now you have a group of people with machine guns telling you when you can leave your house and where you can go. It’s a different scene. Think Katrina.

Travis’s neighbor Doug is has having a meltdown and he doesn’t want to go through with the house screening. Doug better get with the program because in this world, might makes right.

I can see trying to make things seem normal when the world’s a wreck, but I’m pretty sure I would not be painting my living room like Maddie suggests. People hate painting anyway. I’m sure they wouldn’t want to do it when folks are dying all around them and the army has occupied their neighborhood.

Travis tries to talk to his neighbor Doug. But that doesn’t go very well. The big man is in freakout mode and he does not want to seem weak in front of his family. This man knows everything is not going to be ok and he doesn’t know how to go about telling his family that.

Travis’s ex wife Liza is checking on the sick even though she’s not exactly a nurse. She’s the closest thing this little community has and the people think she is a nurse so that’s close enough now that SHTF.

It was good to see Nick hitting a new low this week. It’s one thing to steal some pills to feed your habit. Quite another to yank the IV drip out of a sick man’s arm and stick it in between your toes to get your fix. Cannot wait until this dude is turned into a zombie. Check that, he’s already a zombie. He’s just not infected yet.

When shit hits the fan you will use any tool at your disposal. That’s exactly what Ofelia Salazar is doing with this army guy she’s flirting with. Maybe she really likes him, maybe not. All I know is she needs medicine for her mama and this guy is the closest link to getting that medicine. I’m afraid she’s going to have to step up her game though because the guy is not coming through yet.

I’ve got a bad feeling about what “headquarters” means. That’s where Doug has ended up according to the army Sgt. Doug had the bright idea to drive his car after hours inside the fence, two no-nos. Travis found his car and checked with the Sgt. and he told him that Doug was at headquarters. For all I know Doug is dead, or worse.

Oh and Travis mentioned the light signal to the Sgt. and this guy couldn’t have cared less. He says there’s no life out there. I’m starting to get the feeling this military group is just a rouge crew.

The good news is there’s a doctor on the scene now. Dr. Exner knows Liza is not a real nurse, but tells her she’s been doing good work. These two are going around checking on the sick and at the same time Maddie has slipped outside the fence to see what’s going on in what used to be the world. She probably wishes she’d stayed inside and stuck with the painting. What she sees is pretty disturbing stuff. It was bad enough to see the wall plastered with missing people fliers similar to 911. Then she got a whiff of the dead and that was a bad scene.  She’s pretty lucky not to have been shot, raped, or turned into a zombie during her outing. The fenced in neighborhood may suck, but at least it’s somewhat safe at the moment.

Well there’s bad news for Mrs. Salazar…going to have to amputate that foot. Dr. Exner tells her there’s a facility just 15 minutes away and her husband will be able to go with her. Both lies. If there were a facility so close I’m pretty sure the sick would have already been taken from the neighborhood to the facility. The army does not have the situation under control. The Sgt. may have a nice golf swing but he has no clue how to fix this zombie problem.

We find out that Daniel Salazar saw terrible things as a child. He knows what the government can do when they’re pressed into action. He asks Maddie to tell him what she saw on the outside. He gives her similar advice that Tobias had given her earlier this season, “If it happens, it happens quickly.”

While this is going on Alicia thinks it’s a good idea to give herself a tattoo. I get that she misses her boyfriend but there’s probably a better use of her time.

The highlight of the show this week without a doubt was when Maddie slapped the piss out of Nick. The kid’s looking for dope while everything around him is falling apart. Not only is he of no help, he is a burden. It’s about time he got some tough love.

Later on we see Maddie melting down herself, hitting the bottle out in the car, which has been a sanctuary for her and Travis evidently.

Things get really sideways when the doctor comes for Mrs. Salazar. She has two names on her list to go and the second one is not Daniel Salazar. This causes a major freak out in the house and lots of people having machine guns pointed at them. There are two names on the list to go to the medical facility, but the second one is Nick’s. The army is here to remove the sick and the weak. That may actually be the best way to control a situation like this, but it sure would not be an easy pill to swallow if your family is being hauled off one by one.

We should get a look at this so called medical facility next week through Liza’s eyes. She hopped on one of the trucks to head out to the facility. The doctor told her they could use her help and seems sincere so Liza finally decides to go with them.

So Maddie somehow blames Liza for Nick being hauled off by the army. I know Nick is her kid but they’re going to be a lot better off without him trust me. I’m not sure she and Travis are going to be heading to the backseat of that car anytime soon though. She’s pretty pissed.

This episode wrapped up as Alicia read aloud the letter she had found from her neighbor Susan. It was written for Susan’s husband as she saw everything going to hell. She said she saw something “Godly and overdue” as if she thought this was a punishment from God.

Travis heads to the rooftop to get some alone time and he sees the same signal that Chris had seen. Whether he believed what he told Chris or not, it’s pretty obvious now that it is a signal and not some flashing metal just dangling in the wind.

There’s only two episodes left in season one so I would imagine next week we’re going to see a lot more from what’s outside the fence. Seeing more home improvement projects is not going to be too exciting so I would think we will find out who sent the signal from the house outside the fence.

Six episodes is a short run for this season but season two is scheduled to be 15 episodes. I guess it’s a lot smarter to start out slow to make sure there’s a big demand instead of producing 15 episodes in season one if no one cared.