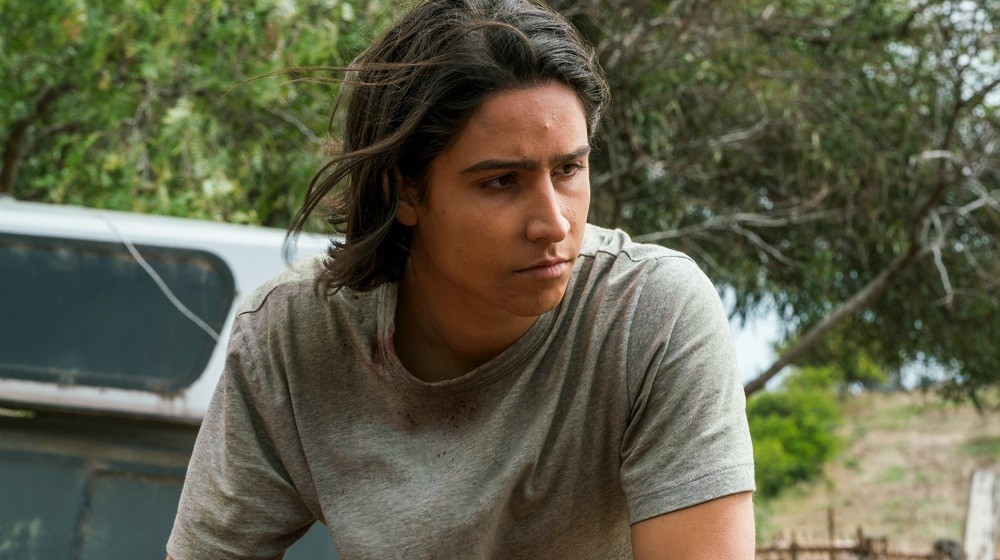 With the season finale just two episodes away, “Fear the Walking Dead” moved things along in episode 13. Travis made his way back to Maddie and poured his heart out slowly over his guilt about losing Chris.

But Travis wasn’t the only one who showed up for some hotel hospitality. Turns out Alicia was right about the sign Maddie lit up last week. 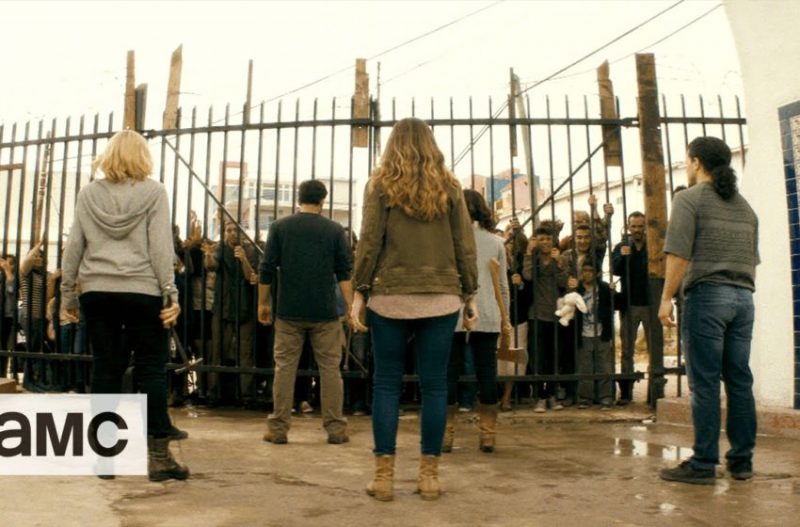 Maddie was lucky the hotel workers didn’t kick her out for making them all a target for about 43 new guests pounding at the gate. Travis is lucky he wasn’t taken hostage by the mob once they heard he was the husband of the lady who was keeping them locked out.

By the way, this mob was pretty weak, allowing Travis to slip inside the gate. A real mob would have overrun the place once that lock was opened. 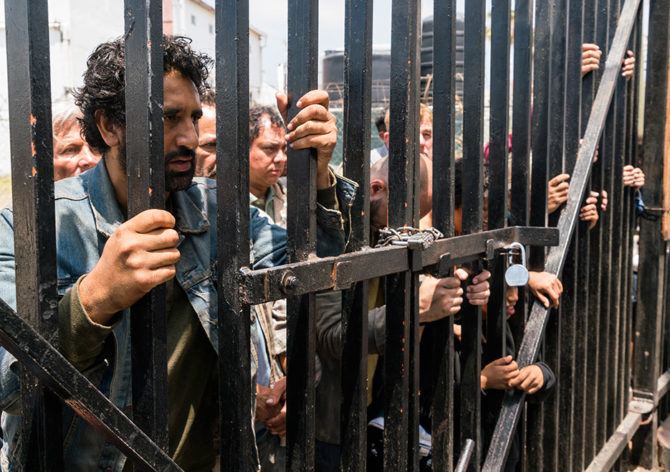 That tells me that most of these poor folks can be trusted to stay at the hotel, which is what happens eventually anyway.

To see how Travis made his way to the seaside hotel, we went into flashback mode. We saw the rancher dead from Chris’ gunshot and Travis tried to stitch up the boy who was shot by the rancher.

Travis knows Chris is lost, but tries to convince him that his new “friends” are monsters.

That doesn’t deter Chris, who has already turned into a monster himself. No redemption coming for this kid.

Chris should see that he will be left behind by his new besties should he ever get injured like James. But he feels the only way to survive is to be cold-blooded in this new dark world. Check out the video below just to get pissed all over again at Chris.

d. Sorry, but not sorry,” Chris told his dad. This should have been enough of a warning to Travis that his kid would choose his new crew over Travis.

Despite a lot of effort from Travis to save James, the crew eventually wants to head out back on the road. The idiot guys have eaten all the egg producing chickens and can’t see they have a safe place on the farm.

They basically want to get back on the road to pillage and cause chaos.

Travis tries to make a stand after the road trip is cancelled when James passes out. He snatched the gun from Chris and guarded James as best he could. James told him that the group had made a pact to kill one another off if they got sick.

But they were carrying the agreement too far. This guy was gonna get better!

No matter. BOOM! was the reply to James’ plea for mercy once Chris tricked Travis and took back his gun. This scene really pissed me off when Chris played on his dad’s soft spot for him and went for the hug only to tackle him and call in his bros. That was such a huge turning point for him to become the most hated person on “Fear the Walking Dead.”

As an audience member, I wanted to shout at Travis to not fall for it, but as a father, I know how easy it is to let your kids manipulate you too. 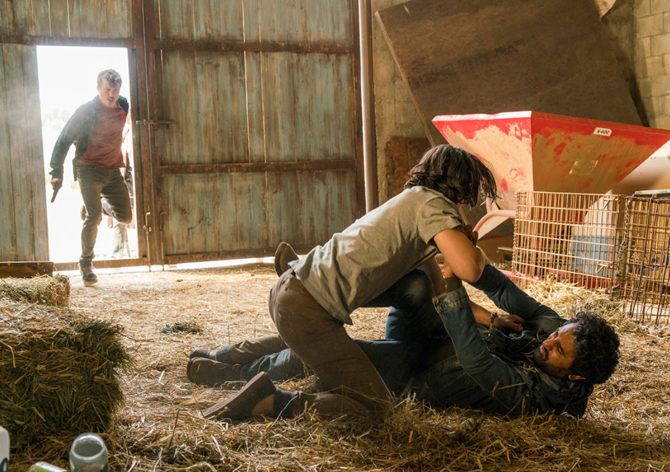 James was shot in the head and Travis is lucky the crew let him live. They leave for San Diego and let Travis hang out at the farm, where he’s become the defacto undertaker. 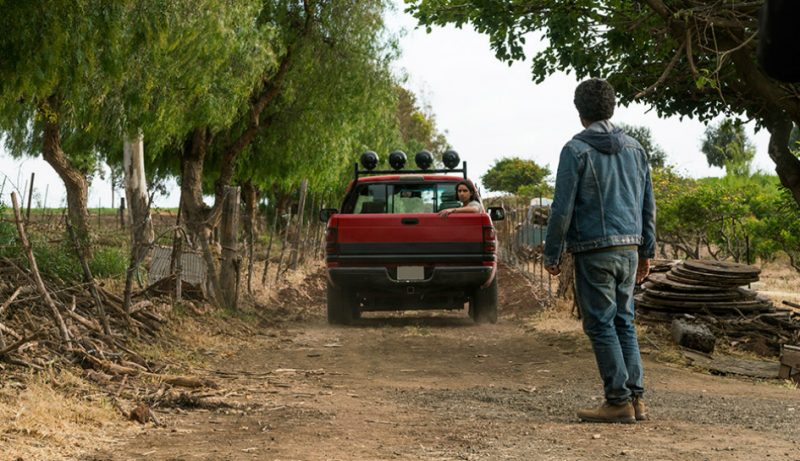 He begged Chris to stay and told him the farmer he shot had the same birthday as Chris. That coincidence didn’t faze the sociopath any, and the last thing Chris heard was his dad damning him as he rode off with his two murderous friends.

Chris is convinced that Travis’ way of dealing with the world will never work. He’s right, but his own devious ways are not the answer either.

Or maybe they are….Negan seems to be doing well in TWD.

Outside of the flashbacks, we see Travis laying all his guilt at Maddie’s feet. We get it. You lost your boy to madness over the death of his mother.

Chris had made a point about Travis not having any problem whacking his ex-wife, but Chris fails to see any difference between the walkers and the living.

The only way Travis could have kept Chris from leaving him would have been to kill the other two guys when he had the chance. And then what? Have your insane kid tag along until he decides to off you Travis?

The end of the episode shows 43 new guests in the parking deck of the hotel, being tended to by our survivors. More people means more consumption of the resources, but it also means more workers to get things back on track. 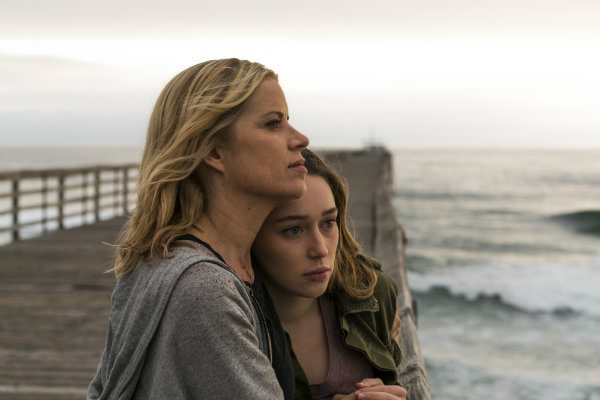 Maddie speaks to Alicia to try and mend fences. She even tells her the secret of her dad’s death. It was no accident. She tells Alicia that her daddy killed himself and left a note.

“I love you all, but enough is enough.”

The only reason to tell Alicia this horrible truth now is for her to understand why Maddie has put so much energy into Nick. She desperately wants to save him from the fate of his father.

This talk did seem to smooth things over for the mother and daughter duo. But it could have gone badly, considering the terrible secret Maddie kept for so long.

Two episodes left and it looks like Travis and company will have to deal with Chris and his buds as early as next week. 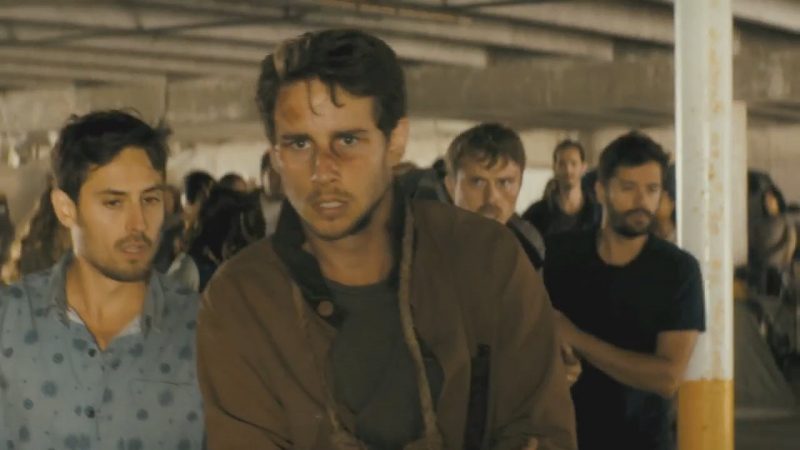