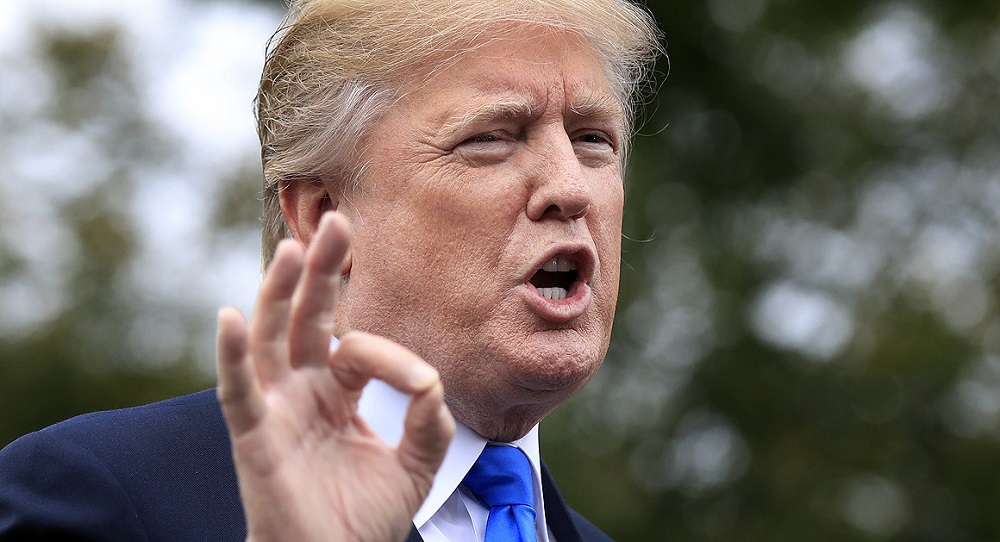 Just when you think that the Donald Trump administration can’t get any lower, they seem to accomplish just that and this week was a whole new low for the White House, even pulling Chief of Staff John Kelly into the mix.

President Donald Trump is sounding an off-key note on his economic performance and perhaps overstating how much the public wants his tax package which some are calling a tax debt package.

A look at some of his statements about the economy over the weekend and a rash of misstatements on a variety of topics over the past week:

TRUMP on economic growth: “In the last quarter we (hit) 3.2 (percent). As you know the previous administration didn’t hit it for the year for 8 years. In eight years didn’t hit it at all.” — Fox Business interview, broadcast Sunday.

THE FACTS: It’s not true that President Barack Obama “didn’t hit it at all.” The economy expanded at 3 percent annual rate or better for eight quarters during Obama’s right years in office. It’s true the economy never grew by more than 3 percent for a full calendar year under Obama. That hasn’t happened since 2005. It is unlikely to happen this year, either.

Trump also misstated his own record. The economy expanded 3.1 percent in the April-June quarter, rather than the 3.2 percent cited by Trump.

TRUMP: “So there’s a great spirit for it, people want to see it, and I call it tax cuts.  It is tax reform also … And I think that there’s tremendous appetite.” — Fox Business interview.

THE FACTS: There may not be as much hunger for the tax package as he argues. Recent polls suggest it’s a relatively low priority for the U.S. public.

According to a Gallup poll in September that asked respondents to name the nation’s most important problem, just 2 percent cited taxes. The top problems were “dissatisfaction with government,” mentioned by 18 percent, and “race relations/racism,” named by 12 percent, followed by immigration at 11 percent.

An April survey by the Pew Research Center found that 54 percent Americans say they pay about the right amount in taxes, while 40 percent say they pay more than their fair share.

The president’s plan calls for cutting the corporate tax rate from 35 percent to 20 percent. But an April Gallup poll found that two-thirds of Americans think corporations pay too little in taxes and this is only a help with debt for them.

TRUMP: “If Congress comes together to enact this commonsense plan, the Council of Economic Advisers estimates that it will raise the annual income of a typical, hardworking American household by an average of around $4,000.” — from an opinion piece under Trump’s byline in USA Today, Sunday.

THE FACTS: That is what his White House Council of Economic Advisers predicts, but the conclusion is strongly disputed by many economists. It is based on the idea that overall incomes would rise $504 billion as a result of his proposed tax cuts. To put that in perspective, that’s $200 billion more than the total revenue generated by the corporate income tax.

The prediction also assumes that most of the benefit from the cut would flow to employees, as businesses use the proceeds to invest in equipment that makes workers more productive. Those more-productive workers could then win higher pay.

Yet an analysis by Treasury Department economists in 2012 found that roughly three-quarters of the benefit of corporate tax cuts would go to investors in the form of dividend payments or share buybacks and helps them while pushing America into too much debt.

TRUMP on consoling families who have lost loved ones in military service: “I think I’ve called every family of someone who’s died.” — interview with Fox News radio, Tuesday.

THE FACTS: He hasn’t. Media outlets contacted relatives of more than 20 of the 43 people who died in military service since Trump took office in January. Relatives of at least 10 of the fallen said they did not get a call. Some also didn’t get a letter.

TRUMP, on how past presidents dealt with family members who lost loved ones in military service: “Most of them didn’t make calls.” Obama might have done so on occasion but “other presidents did not call.” — news conference Oct. 1.

THE FACTS: The recent record is clear: Obama and President George W. Bush made painstaking efforts to contact bereaved military families, and they had many more to deal with than Trump so far in his presidency.

Bush, even at the height of two wars, “wrote all the families of the fallen,” said Freddy Ford, spokesman for the ex-president. Ford said Bush also called or met “hundreds, if not thousands” of family members of the war dead.

Obama, too, paid plenty of attention to families of the fallen, visiting Dover Air Force Base in Delaware on some occasions when the remains of the dead were brought back to the U.S., inviting Gold Star families to the White House, and meeting, calling or writing to others.

THE FACTS: Trump misstates the statistics and the reason crime has gone up.

The 13 percent increase cited by Trump refers to crime in England and Wales, not the entire U.K., which also includes Scotland and Northern Ireland.

The biggest jump in crime reports came from car thefts and shoplifting. Homicides slightly dropped, even with deadly attacks by extremists in London and Manchester.

THE FACTS: No, it made landfall as a strong Category 4 hurricane, not 5. Though devastating, Maria also did not rake across the island as a Category 5. It weakened, and left the island some seven hours later as barely a Category 3.

TRUMP: “We keep being given credit. You know, it’s very nice that the gentleman who worked for Bill Clinton, when he was president, gave us an A-plus. And that included Puerto Rico. Gave us an A-plus. And I thought that was really very nice. And I think — I really believe he’s correct. We have done a really great job.” — comments after Rossello meeting.

THE FACTS: No, Trump did not get an A-plus for his Puerto Rico response from the Clinton-era administration emergency chief cited by Trump, James Lee Witt. But it’s understandable that he thought so. Published reports suggested Witt had given the Trump administration top grades for its actions in all three monster storms — Harvey, Irma, and Maria.

But Witt told media outlets he did not assign a grade to the Maria response because it’s too soon. It could end up being an A, F or grade in between, he said.

TRUMP: “The Fake News is going crazy with wacky Congresswoman Wilson(D), who was SECRETLY on a very personal call, and gave a total lie on content!” — tweet Thursday

CHIEF OF STAFF JOHN KELLY: “It stuns me that a member of Congress would have listened in on that conversation. Absolutely stuns me. And I thought at least that was sacred.” — briefing Thursday.

THE FACTS: The suggestion that Florida Rep. Frederica Wilson eavesdropped for nefarious purposes on Trump’s call to a war widow is problematic, at best.

She’s indeed been scathing about Trump’s behavior on the phone with Myeshia Johnson, wife of Sgt. La David Johnson, killed early this month in an ambush in Niger. Three other U.S. soldiers also died.

What Trump said — and how he said it — is in dispute. But Wilson is a friend of the family and was with the widow and the aunt and uncle who raised the soldier as a boy when the call arrived. The family members and Wilson were in a car, and the call was placed on speakerphone. Meantime, Kelly and several others at the White House listened from their end to what Trump said was a “very personal call.”

KELLY, on a 2015 building dedication ceremony at which he said Wilson stood and talked about herself: “And a congresswoman stood up, and in a long tradition of empty barrels making the most noise, stood up there in all of that and talked about how she was instrumental in getting the funding for that building, and how she took care of her constituents because she got the money, and she just called up President Obama, and on that phone call, he gave the money, the $20 million, to build the building, and she sat down. And we were stunned, stunned that she’d done it.” — briefing Thursday.

THE FACTS: That’s not what happened. In a video of the ceremony, the Democratic congresswoman never takes credit for getting the government to pay for the building. The project was approved before she came to Congress. She spent up to three minutes of her nine-minute remarks talking about her drive to have the building named after two slain FBI agents, and about the Republican lawmakers and others who rallied to that cause and made it happen quickly.

Kelly, who lost his Marine son Robert in Afghanistan in 2010, was furious about Wilson’s criticisms of Trump’s phone call.

THE FACTS: Not “beyond anything.” He’s had more judges confirmed than Barack Obama did in the same period as his presidency, and his numbers aren’t far off those of other recent presidents.

He actually has a leg up in the process because in 2013, then-majority Democrats changed Senate rules so judicial nominations for trial and appeals courts can be approved with only 51 Senate votes, a simple majority. Republicans currently hold 52 seats.

Seven of Trump’s judicial nominees have been confirmed by the Senate. According to federal statistics, Obama had three judicial nominees confirmed at the same point of his presidency, just shy of nine months. President George H.W. Bush had four confirmed. Other recent presidents had more confirmed: eight for George W. Bush, nine for Clinton, 13 for Ronald Reagan.

TRUMP calls his tax overhaul the “largest tax cut in the history of our nation.” — news conference Oct. 16.

THE FACTS: His tax plan is, at most, fifth largest in its estimated cost, says Marc Goldwein of the nonpartisan Committee for a Responsible Federal Budget. It could end up being even lower on the ladder historically.

The estimated cost of the tax plan has dropped by half or more since the spring when only the contours were known. In an analysis in April, Goldwein’s group found that the $5.5 trillion plan that was then expected would have been the third largest since 1940 as a share of gross domestic product, behind Reagan’s package in 1981 and tax cuts enacted in 1945 to phase out revenue generated for World War II. But, citing estimated costs of $1.5 trillion to $2.5 trillion for Trump’s plan now, Goldwein said several other historically significant tax cuts also would surpass Trump’s: from 2013 and 1964.