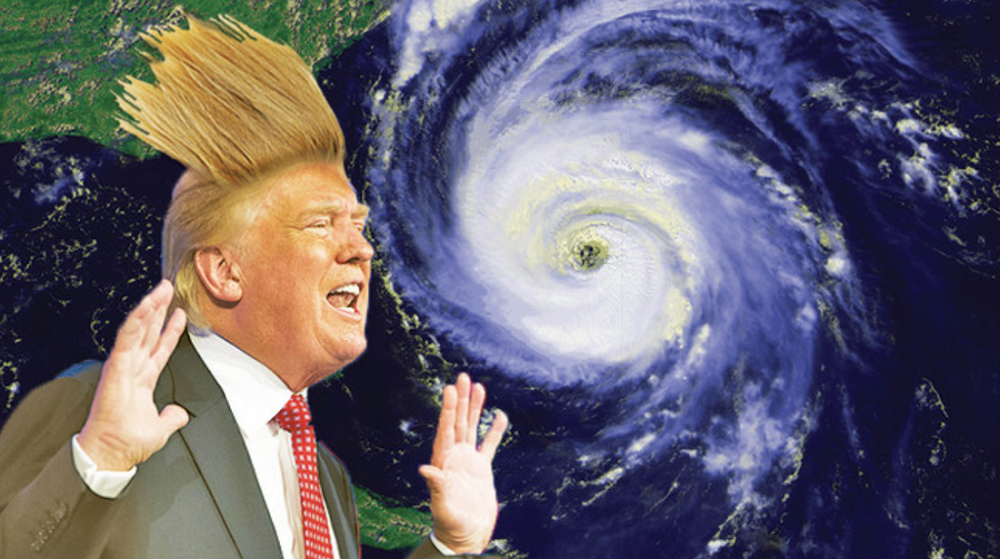 Donald Trump rated himself a perfect “10” despite the facts and what many Puerto Ricans have said about his response to their hurricane-ravaged island.

President Donald Trump gave himself a “10” on Thursday for his response to the widespread devastation Puerto Rico suffered after back-to-back hurricanes created a situation that the island’s governor described as “catastrophic” as he met with Trump at the White House.

More than 80 percent of households in Puerto Rico remain without electricity about a month after Hurricane Maria, the second storm, dealt the island a severe blow. Asked when the 3.4 million U.S. citizens living there could expect power to be fully restored, Trump replied: “It’s a very, very good question, actually.”

Trump said it will take “a while” to build a new power plant or substantially renovate what was damaged by the storms. The president said most of the power that exists is being supplied by the “massive numbers” of generators he sent to the island.

“There’s never been a case where power plants were gone,” Trump said, seated alongside Gov. Ricardo Rossello in the Oval Office. “So it’s going to be a period of time before the electric is restored.”

Trump was also asked by a reporter to rate, on a scale of 1 to 10, the White House response to Puerto Rico.

Trump said the administration had personnel nearby before the storm hit, ready to go afterward, and that a “fantastic job” was done under the circumstances.

During a visit to Puerto Rico earlier this month to survey the damage, Trump compared what happened there to a “real catastrophe” like Hurricane Katrina, which struck New Orleans in 2005, killing hundreds when levees broke and flooded the city. Trump’s comment was interpreted by some as minimizing Puerto Rico’s suffering at a time when residents were struggling to get food and clean drinking water, and coping without electricity.

Seated beside Trump, Rossello tried to strike an upbeat note despite saying “it’s a catastrophic situation” in Puerto Rico. But he said, “We are going to beat this. We know we’re going to build better than before,” he said.

The two hurricanes that hit Puerto Rico last month — first Irma then Maria — were “in many ways worse than anything people have ever seen,” Trump said.

Rossello has been supportive of Trump, saying again Thursday that every request he’s made of the president has been answered. The governor, who also met with key lawmakers on Capitol Hill, said Trump “has been clear that no U.S. citizen will be left behind.”

Members of Congress from both parties have criticized the response to Puerto Rico as lackluster compared to the administration’s reaction after hurricanes in Houston and parts of Louisiana, and later in Florida.

The mayor of San Juan has also been a vocal critic of the response and of some of Trump’s comments on Twitter.

Trump said he had given his “blessing” to Congress for a funding plan to help the debt-ridden island pay for the new power station. The electrical grid was in poor shape long before the storm hit.

The president also sought to clarify a tweet from earlier this month that seemed to suggest he was ready to cut off federal assistance to the U.S. territory, saying FEMA, the military, and first responders can’t stay “in P.R. forever!”

Trump said Thursday that “at a certain point,” FEMA and other agencies have to leave the locations where the U.S. goes to help.

Responding to upbeat comments from Trump’s acting Homeland Security secretary, San Juan Mayor Carmen Yulin Cruz said, “This is not a good news story, this is a people are dying story.”

Nearly a month after Maria made landfall, only 22 percent of the island’s 3.4 million residents have electricity, and 72 percent have access to clean water.

But about 78 percent of the hospitals are open, although electric service is still unreliable.

Trump said despite the efforts of emergency personnel, getting help to the residents was a logistical nightmare because the storm wrecked infrastructure and many of the roads were blocked with debris from the storm.

Remarking on Puerto Rico’s $74 billion in debt, Trump said the government would work out a plan for it to pay back any loans during the rebuilding process.

“I will say that I have given my blessing to Congress and Congress is working with you and your representatives on coming up with a plan and a payment plan and how it’s all going to be funded,” he said.

The Senate is considering giving Puerto Rico $4.9 billion in loans as part of a hurricane and wildfire relief bill. 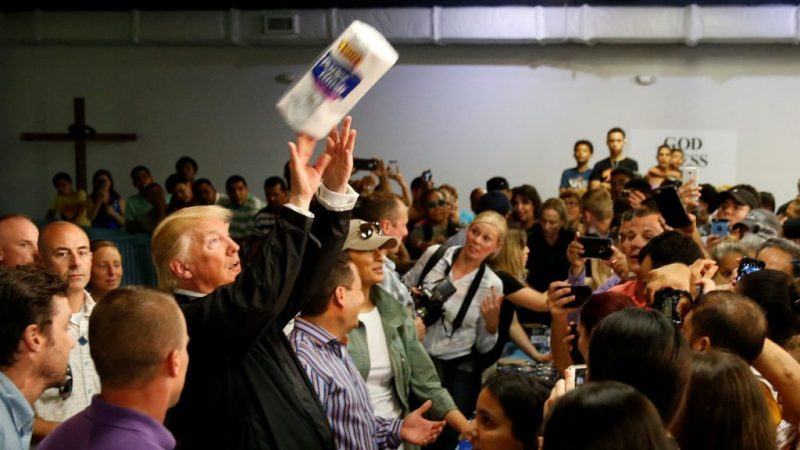 President Donald Trump won’t let go of the false claim that Puerto Rico was hit by a Category 5 hurricane. He also errs in citing praise from a Clinton-era official for the way he’s responded to the island’s plight.

The fact Maria fell just short of a 5 is of no comfort to people on the devastated island, but Trump is distorting the historical record with his persistent mischaracterization.

Past hurricanes, such as Andrew in 1992, have sometimes been upgraded from Category 4 to 5 after further review of damage on the ground, but as of now, the National Hurricane Center lists Maria as an upper limit Category 4.

TRUMP: “We keep being given credit. You know, it’s very nice that the gentleman who worked for Bill Clinton, when he was president, gave us an A-plus. And that included Puerto Rico. Gave us an A-plus. And I thought that was really very nice. And I think — I really believe he’s correct. We have done a really great job.” — comments after Rossello meeting

THE FACTS: James Lee Witt, the Clinton administration emergency chief cited by Trump, says he never gave Trump an A-plus for his Puerto Rico efforts because it is too early to judge them. Trump might be forgiven for thinking he got that praise from Witt because published reports suggested he did.

But Witt said in an media interview and in a statement that his praise regarded hurricanes Harvey and Irma only. He thought the Trump administration responded effectively to them.

But Maria? “Even today it is yet to be determined whether the ultimate response to that hurricane will get an A, C or F or something else,” he said. “As time goes by that will become apparent.”