White House chief of staff John Kelly had quite a stellar reputation until he entered Donald Trump‘s vortex. Like many people who seemingly had impeccable reputations in Washington D.C., he’s slowly getting tarnished as he begins to fall into the world of stating falsehoods whether he’s aware of them or not.

It’s been amazing to see how many people who had great respect have suddenly become tarnished in Trump’s world proving that while many may want to change Capital Hill; Capital Hill will always wind up changing you.

Rep. Frederica Wilson said Friday that White House chief of staff John Kelly lied when he criticized her for allegedly taking credit for securing funding for an FBI field office two years ago.

Kelly, speaking at a briefing Thursday afternoon, denounced Wilson after the Democratic congresswoman publicly criticized President Donald Trump’s comments during a phone call with the widow of a fallen soldier.

“I was not even in Congress in 2009 when the money for the building was secured,” the Florida Democrat said Friday on CNN’s “New Day.” “So that’s a lie. How dare he. However, I named the building at the behest of (then-FBI Director James Comey) with the help of (then-House Speaker John Boehner), working across party lines. So he didn’t tell the truth.” She earlier denied Kelly’s claim to the Miami Herald Thursday night.

Kelly was referring Thursday to an FBI field office in Miramar, Florida, that was dedicated in 2015 to two FBI agents who were killed during a gunfight with drug traffickers. The chief of staff said he was “stunned” by Wilson’s public comments at the ceremony dedicating the building.

“And a congresswoman stood up, and in a long tradition of empty barrels making the most noise, stood up there in all of that and talked about how she was instrumental in getting the funding for that building, and how she took care of her constituents because she got the money, and she just called up President (Barack) Obama, and on that phone call, he gave the money, the $20 million, to build the building, and she sat down,” Kelly said. “And we were stunned, stunned that she’d done it. Even for someone that is that empty a barrel, we were stunned.”

“We looked it up in the dictionary, because I had never heard of an empty barrel. And I don’t like to be dragged into something like that,” she said.

Trump and Wilson have engaged in a public dispute over the past several days over a highly sensitive call placed to the late Sgt. La David Johnson’s family. The President, according to the congresswoman and a family member present during the condolence call, said Johnson “knew what he signed up for.” Wilson said Friday that is “not a good message to say to anyone who has lost a child at war.”

“You don’t sign up because you think you’re going to die,” she told CNN. “You sign up to serve your country.”

She was referring to how Kelly, a Gold Star father, said he was “brokenhearted” by the congresswoman’s criticism. He said he had advised Trump on what to say before he called the families of the four fallen soldiers who died during an ambush in Niger earlier this month, including the point that soldiers “knew what the possibilities were” of joining the military.

Wilson said Friday that she didn’t misinterpret anything when she listened in on that call.

On Thursday night, Trump again denied Wilson’s account of his call, deeming it a “total lie” hours after his own chief of staff said she mischaracterized the call.

“The Fake News is going crazy with wacky Congresswoman Wilson(D), who was SECRETLY on a very personal call, and gave a total lie on content!” Trump tweeted Thursday evening.

Wilson, who listened in on the call via speakerphone because she is close with the family, said that she wants to shift the focus on receiving more information from the Pentagon about the Niger attack.

“My emphasis today is on my constituents and helping them lay our hero to rest,” she said. “That’s where my head is today. I’m also concerned about (Sgt. La David Johnson) and his last moments. I want to know why he was separated from the rest of the soldiers.”

She continued: “Why did it take 48 hours to find him? Was he still alive? Was he kidnapped? What’s going on? … I am distraught and so is the family. There are so many questions that should be answered.”

Johnson was among the four US soldiers killed by 50 ISIS fighters in Niger in an ambush earlier this month. 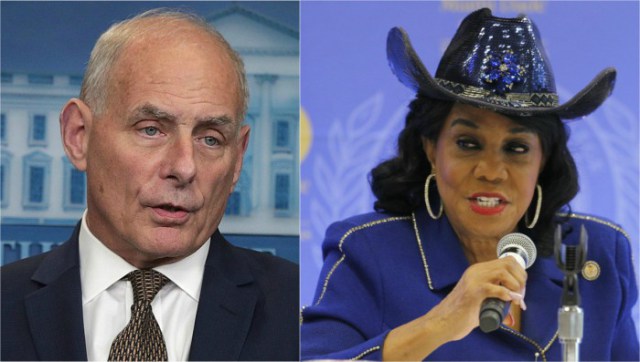 President Donald Trump’s chief of staff distorted the facts when he accused a “selfish” Florida Rep. Frederica Wilson of grandstanding at a building dedication in the memory of two fallen FBI agents in 2015.

John Kelly said she stunned the audience at the somber ceremony by recounting how she had been the driving force behind raising money for the building, the FBI’s South Florida headquarters. But a video of her remarks at the dedication shows she never took credit for getting the government to come up with the money for the project. Indeed, the building was approved several years before she entered Congress.

Instead, she talked about an effort she did lead — to have the building named after the special agents, Ben Grogan and Jerry Dove, who were killed in a 1986 gun battle in Miami.

After the video emerged Friday, the White House tried to amend Kelly’s complaint. Trump spokeswoman Sarah Huckabee Sanders said Kelly was stunned that the Democratic congresswoman talked about “her own actions in Congress” at the event, glossing over his erroneous claim that Wilson had bragged about raising the money. “As General Kelly pointed out, if you’re able to make a sacred act like honoring American heroes about yourself, you’re an empty barrel,” Sanders said.

On Thursday, flush with fury, Kelly spoke about the episode when he challenged Wilson’s criticisms of Trump’s behavior on the phone with a war widow this week. A look at his comments and what the video shows:

KELLY: “And a congresswoman stood up, and in a long tradition of empty barrels making the most noise, stood up there in all of that and talked about how she was instrumental in getting the funding for that building, and how she took care of her constituents because she got the money, and she just called up President Obama, and on that phone call, he gave the money, the $20 million, to build the building, and she sat down. And we were stunned, stunned that she’d done it. Even for someone that is that empty a barrel, we were stunned.”

THE FACTS: Kelly’s recollection is incorrect. In her nine-minute speech at the April 10, 2015, dedication ceremony, a video of which was found by the South Florida Sun-Sentinel, Wilson never mentions the building’s financing.

Rather, she recounts how she was asked by the FBI four weeks earlier to expedite a bill through Congress to name the building after Grogan and Dove. She said the process normally takes eight months to a year.

“I went into attack mode,” she said. She said she approached then-Speaker John Boehner, telling him “the FBI needs your help and our country needs your help.” She said Boehner got the bill to the House floor for a vote in two days. She said she then rushed the bill to Florida Sens. Bill Nelson and Marco Rubio, who got the bill passed by that chamber two days later. President Barack Obama signed the bill three days before the dedication ceremony. The audience responded with loud applause.

“It’s a miracle, but it speaks to the respect that our Congress has for the Federal Bureau of Investigation,” she said.

She then asked all first responders to stand so they could receive applause.

Wilson then recited the biographies of agents Grogan and Dove and detailed the gun battle in which they were killed and five other agents wounded.