Home All News Politics George W. Bush has his say on Donald Trump 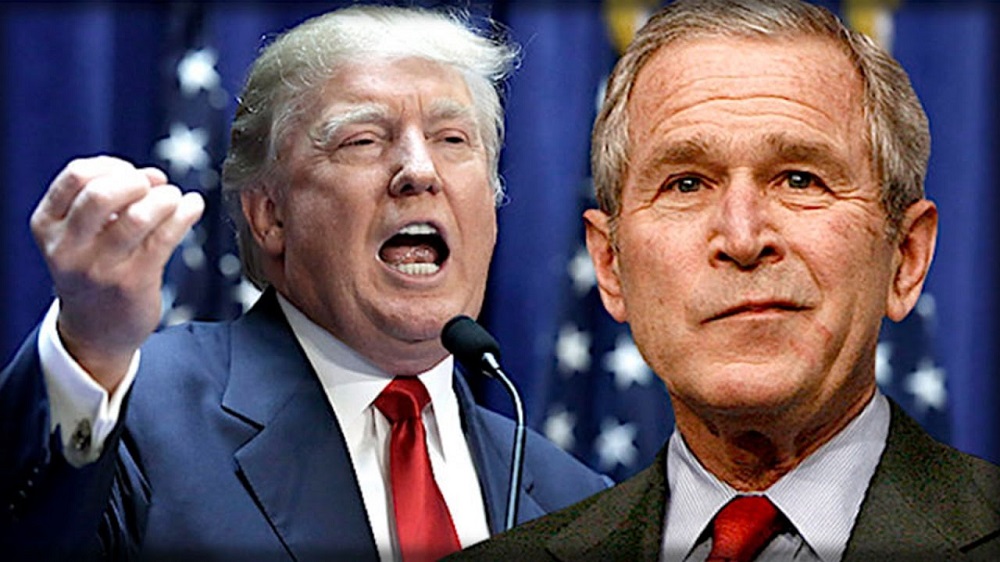 Previous presidents make it a point not to speak about a current president, but as Donald Trump has proven not to be a normal one, former President George W. Bush had to say something.

On Thursday denounced bigotry in Trump-era American politics, warning that the rise of “nativism,” isolationism and conspiracy theories have clouded the nation’s true identity.

The comments, delivered at a New York City conference hosted by the George W. Bush Institute, amounted to an indirect critique from a former Republican president who has remained largely silent during President Donald Trump’s unlikely rise to power. The 43rd president did not name Trump on Thursday, but he attacked some of the principles that define the 45th president’s political brand.

The fact that a former president was sounding the alarm about American values and the United States’ role in the world at a time when Trump has unsettled allies abroad and provoked an intense political backlash at home injected his remarks with greater urgency.

“We’ve seen nationalism distorted into nativism, forgotten the dynamism that immigration has always brought to America,” Bush said. “We see a fading confidence in the value of free markets and international trade, forgetting that conflict, instability, and poverty follow in the wake of protectionism. We’ve seen the return of isolation sentiments, forgetting that American security is directly threatened by the chaos and despair of distant places.”

“We need to recall and recover our own identity,” he continued. “To renew our country, we only need to remember our values.”

Asked about the speech, Trump said he hadn’t seen it.

The comment about identity was one of several that warned of what Bush described as troubling political trends.

Bush noted Russia’s meddling in the 2016 election and declared that “the Russian government has made a project of turning Americans against each other.”

“Foreign aggressions, including cyberattacks, disinformation, and financial influence, should never be downplayed or tolerated,” Bush said.

Trump has expressed skepticism of Russia’s involvement. A special prosecutor is currently investigating whether Trump and his campaign associates coordinated with Moscow in the effort to sway the election.

Bush is the brother of 2016 presidential hopeful Jeb Bush, the former Florida governor nicknamed, belittled and ultimately vanquished by Trump during the race for the Republican nomination. He joins a slowly growing list of prominent Republicans who have publicly defied Trump, including Republican Sens. John McCain, who delivered a similar speech this week. Sen. Bob Corker, the Tennessee Republican who has announced he’s retiring, has denounced what he termed the “adult day care center” of the Trump White House.

The scene was remarkable in part because Bush has largely remained out of the political spotlight since leaving office amid low popularity in 2009 and had made a point not to criticize or second-guess his Democratic successor, Barack Obama. Just hours after Bush completed his speech, Obama also made a veiled critique of the Trump era, calling on Democrats at a New Jersey campaign event to “send a message to the world that we are rejecting a politics of division, we are rejecting a politics of fear.”

That Trump’s two most recent predecessors felt liberated, or perhaps compelled, to reenter the political arena in a manner that offered an implicit criticism of him is virtually unprecedented in modern politics, historians said. Trump has been harshly critical of both Bush and Obama — calling each of them the “worst” president at one time or another — and mercilessly mocked the 43rd president’s brother, Jeb Bush, during the 2016 Republican primary.

George W. Bush was taking aim at Trump’s “roiling of the traditional institutions of the country and, in particular, demeaning the office of the president by a kind of crude or vulgar bashing of opponents,” said Robert Dallek, a presidential historian and author.

“I think this is Bush throwing down the gauntlet and feeling that this is a man who has gone too far,” Dallek said. The discretion former presidents traditionally afforded their successors “is now sort of fading to the past because of the belligerence of Trump.”

McCain’s critique prompted Trump to warn him to “be careful” because he is prepared to “fight back.”

The common thread among Bush’s and McCain’s words was a defense of the post-World War II liberal order that America helped build which supported strong security alliances, a defense of human rights and an open economic system of free trade, said Richard Fontaine, who served on the National Security Council under Bush and was a foreign policy adviser to McCain.

While Republicans and Democrats have disagreed over the means to achieve such objectives, Trump has opened a direct assault on many of these ideals, Fontaine said.

“The hallmark of McCain’s and Bush’s speeches was to try to re-center us on what have been, since 1945, these traditional ends,” said Fontaine, now the president of the Center for a New American Security.

Before leaving office, Obama had said his goal was to remain out of the political spotlight in part to afford his successor the political space to govern, as Bush had done for him. He cautioned at the time, however, that he would speak out if he saw “core values” at risk.

Since Trump took office, Obama has spoken out on occasion to defend his legacy against Trump’s attempts to repeal the Affordable Care Act, unwind U.S. participation in the Paris climate accord and impose new limits on immigration.

On Thursday, Obama returned to the campaign trail, stumping for Democratic gubernatorial candidates in New Jersey and Virginia. Though he was not as dire as Bush, Obama said in New Jersey that “some of the politics we see now we thought we put that to bed. That’s folks looking 50 years back. It’s the 21st century, not the 19th century.”

He also reminded his audience that “you can’t take this election or any election for granted.” Pausing a beat, he added: “I don’t know if you all noticed that.”

But during the Bush event, a current Trump administration official also broke with Trump’s dismissive tone on Russian interference. Nikki Haley, Trump’s chief envoy to the United Nations, cast Russia’s efforts to influence the 2016 election as “warfare” and efforts to “sow chaos” in elections across the world.

“The Russians, God bless them, they’re saying, ‘Why are Americans anti-Russian? And why have we done the sanctions?’ Well, don’t interfere in our elections and we won’t be anti-Russian,” Haley said. She added, “When a country can come and interfere in another country’s elections, that is warfare.”

Facebook recently provided three congressional committees with more than 3,000 ads they had traced to a Russian internet agency and told investigators of their contents. Twitter also briefed Congress last month and handed over to Senate investigators the profile names of 201 accounts linked to Russians.