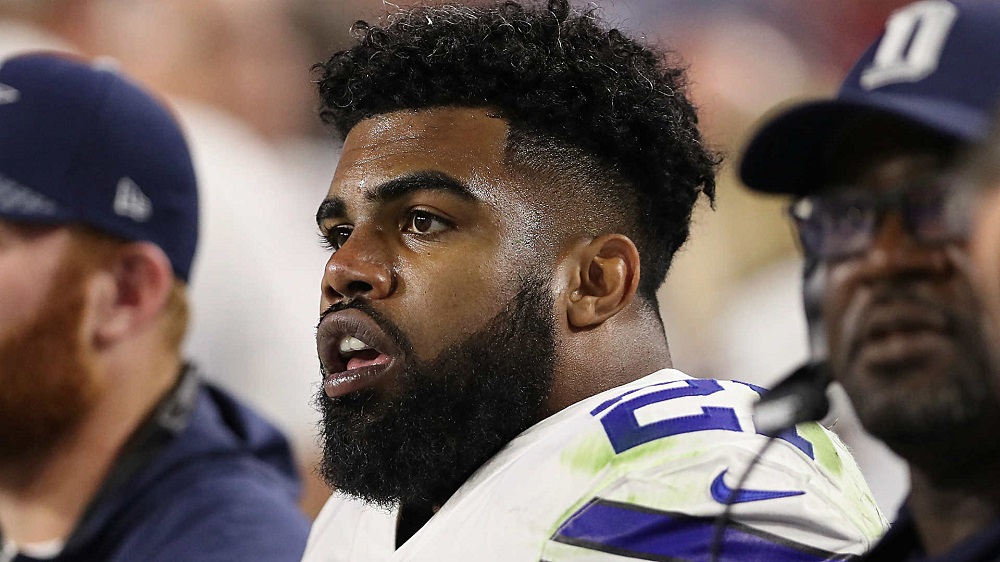 The Fifth Circuit Court of Appeals in New Orleans has approved the NFL’s motion for a stay on the injunction in the legal battle with Dallas Cowboys star running back Ezekiel Elliott. The move effectively frees up the NFL to enforce its six-game suspension of Elliott for domestic abuse immediately after weeks of legal back and forth.

After the decision was announced, the NFL released a statement saying that Elliott’s six games would be served immediately, starting with the team’s Week Seven matchup against the San Francisco 49ers. Then, again, if commissioner Roger Goodell really wants to stick it to the Cowboys, he should wait till after the Niners game, so it hurts more.

Nonetheless, the NFLPA continues to fight on Elliott’s behalf, along with his attorney, Frank Salzano.

It was the union’s immediate appeal of Goodell’s original decision that has allowed Elliott to play in the Cowboys’ first five games. Now, the NFLPA is asking for a court date, and they argue that the court should continue to hold the suspension until the date of the hearing in court.

“The NFL follows a procedure in which it requires teams to set final rosters (listing active player employees) for that week’s game at 4:00 p.m. EDT on Tuesday, so for this week’s game, on Tuesday, October 17,” wrote the players’ union. “Thus, the NFLPA respectfully requests an immediate order from the Court enjoining any suspension until such time as this Court or the Texas district court, depending upon the outcome of further proceedings, renders a final decision on the NFLPA’s vacatur claim (in Texas) or counterclaim (in New York).”

Salzano, on the other hand, will file a petition asking New York to hear the case before the Fifth Circuit. As CBS legal analyst Amy Dash explains, the whole thing is still a toss-up.

“A request for an emergency restraining order can be granted on the same day as the hearing, so it’s very possible that by the end of this week Elliott’s suspension could be back on hold again if the NFLPA wins,” said Dash. “But now we have two lawsuits going on at the same time in two states. The district court in Texas has not dismissed the case to New York yet, so it’s possible the New York judge refuses to give a restraining order until the Fifth Circuit issues its decision. That would mean Elliott would be suspended for Sunday. So it’s anybody’s game.”

The Fifth Circuit might also grant the hearing requested by the NFLPA, overturning the decision made by the three-judge panel, in which case Elliott’s suspension would remain delayed.

“Both gave substantive dissertations on fundamental fairness,” said sports law attorney Daniel Wallach. “The [New York] judge is now armed with two powerful court opinions to grant the injunction as a placeholder. The opinions provide a road map for an injunction. All he has to show is a likelihood of success. It doesn’t mean he will win the case in the long run.”

So, to simplify things, Elliott was granted an injunction by a Texas court, delaying the suspension. Then, in a 2-1 decision by a panel of three Fifth Circuit Court judges, the NFL won the battle to void the injunction and reinstate the six-game ban immediately (the NFL would very much like this to be served and over with). Now, the NFLPA is asking the Fifth Circuit to keep the injunction until Elliott has a chance to have his case hear in front of a panel of judges.

“The NFLPA and Elliott, therefore, are stuck in procedural limbo and must turn to this Court for preliminary injunctive relief to prevent imminent and irreparable harm to Elliott,” NFLPA lawyers wrote in their request.

Much like the reversal of the injunction, the Fifth Circuit decision on the NFLPA’s request could come any day. It might be tomorrow; it might be next week. Either way, until then, Elliott is suspended.

As much as I disagree with the league’s decision to suspend Elliott despite insufficient evidence, I disagree more with his ability to delay the punishment in court. Under Elliott’s contract (just like that of everyone else in the NFL), Goodell and the league have the right to suspend the RB for what they believe to be misconduct, etc. Whether you believe the decision to be wrong or right, Goodell has every right to make that decision.

Elliott and the NFLPA didn’t even follow all the proper steps in the contract for settling disputes. The union argued that Elliott was better off running straight to court because going through the legal was more for show than anything when Goodell has the final say at all levels.

Still, judges / courts shouldn’t be interfering with contracts between two consenting adults just because one party thinks that the other party isn’t being fair. That doesn’t absolve you from the terms you agreed to. And I don’t think the NFLPA could make a good argument that they were tricked into agreeing to the terms of the deal.

So, Elliott will eventually serve that suspension, as did Tom Brady for cheating. Let’s just get it over with.