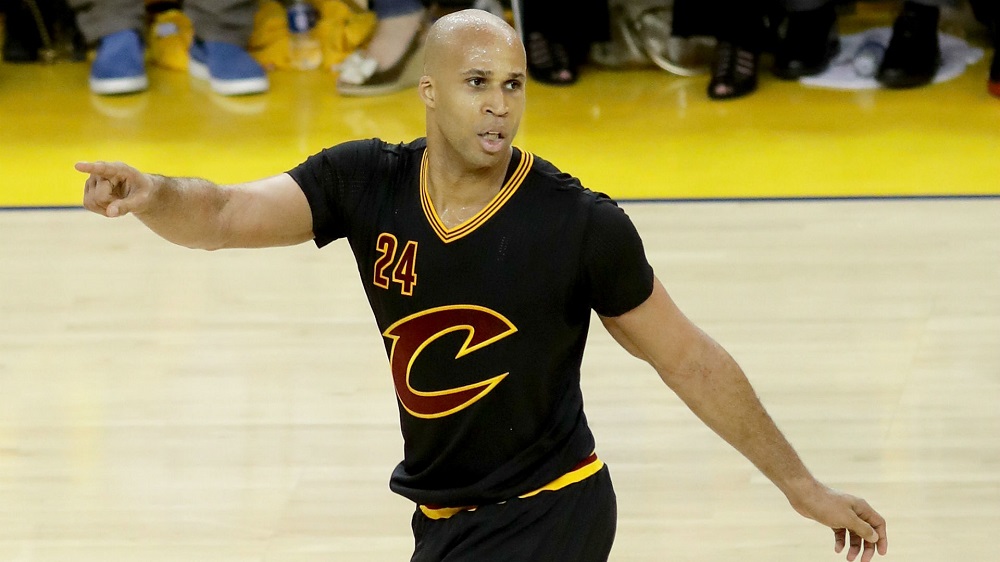 The Cleveland Cavaliers said goodbye to veteran Richard Jefferson after finalizing a trade Saturday with the Atlanta Hawks. The Cavs sent Jefferson and guard Kay Felder along with two second-round draft picks and $3 million cash to Atlanta. The move does clear up two rosters spots, and the Cavs will save around $12 million in luxury tax penalties along with receiving the rights to European players Dimitrios Agravanis and Sergey Gladyr.

The Hawks didn’t keep Jefferson and Felder around for long, waiving both players immediately after finalizing the trade.

So, after two seasons with the Cleveland Cavaliers and one NBA Championship in 2016, Jefferson becomes a free agent. Of course, experienced veterans and leaders like Jefferson don’t stay down long, and the Denver Nuggets have already agreed to pick up R.J. on a one-year deal worth $2.3 million.

It wasn’t easy for the Cavs to let Jefferson go. He was a beloved member of the organization. His dynamic personality touched everyone. Sadly, basketball is a business, and sometimes teams have to make tough decisions.

“R.J. embodies all of the things you could want in a veteran player and teammate,” said Cavs general manager Koby Altman. “His consistent success at a very high level over many years is a reflection of the kind of high-quality player and person he is. His steady leadership, great attitude, dependability, and performance helped us win an NBA Championship, and we are grateful for all of his contributions on the court and within our locker room.”

With new additions like Dwayne Wade, Derrick Rose, Jae Crowder, and others, the Cavs needed to make some cuts in order to get to 15 before the start of the season. While the 37-year-old Jefferson still makes some plays, he had to make room for the younger stars.

Another member of the Cavs wasn’t so collected about the trade.

“Richard won a championship with us,” said a Cavs source, who spoke anonymously before the trade was finalized. “That’s the hardest part, is the blood, sweat, and tears. That guy helped us win a f–king championship.”

Jefferson had finally made it to the top with Cleveland after a career full of being second best. Jefferson started his career with the Brooklyn Nets, losing back-to-back NBA Finals appearances, earning a bronze medal with Team USA Basketball in the embarrassment that was the 2004 Olympics, being traded away from the San Antonio Spurs in 2012 before their 2014 championship, and then sent off again by the Golden State Warriors in 2013.

But, in 2016, he finally did it. The old man got his jewelry. And while some members of the Cavaliers are devastated to see R.J. go, his best friend on the team, Channing Frye, who has known Jefferson since they were teenagers when R.J. gave him a tour of the University of Arizona, knows that Jefferson will be fine.

“Do I feel bad for him? Have you seen his house in L.A., in Manhattan Beach? He’s living good,” said Frye. “He’s doing okay. He’s not dying. S–t, he’s just not on this team. We have a really good team, and this team has to do not what’s best for Channing’s best friend to be here or for Richard to be here, they have to do what’s best for Cleveland, and right now we got really freaking good players on this team…He’s going to be my boy. Hopefully, he’s not calling me too much if he’s bored. But we’re good.”

R.J. has made over $100 million in the NBA to date, so he certainly isn’t hurting. At this point, Jefferson is playing more for a ring than for the money, and with the Nuggets picking him up, it isn’t looking like he’ll be adding to his mantle this season.

The Nuggets, however, like Frye mentioned, are receiving one hell of a veteran leader and locker room presence who can still show up and play. He’s not good for 20 points a game anymore, but for a young, developing team like Denver’s, his value off the court is much higher.

Nonetheless, Jefferson’s presence will be missed by this Cavaliers team as they try to make their fourth-straight NBA Finals appearance.