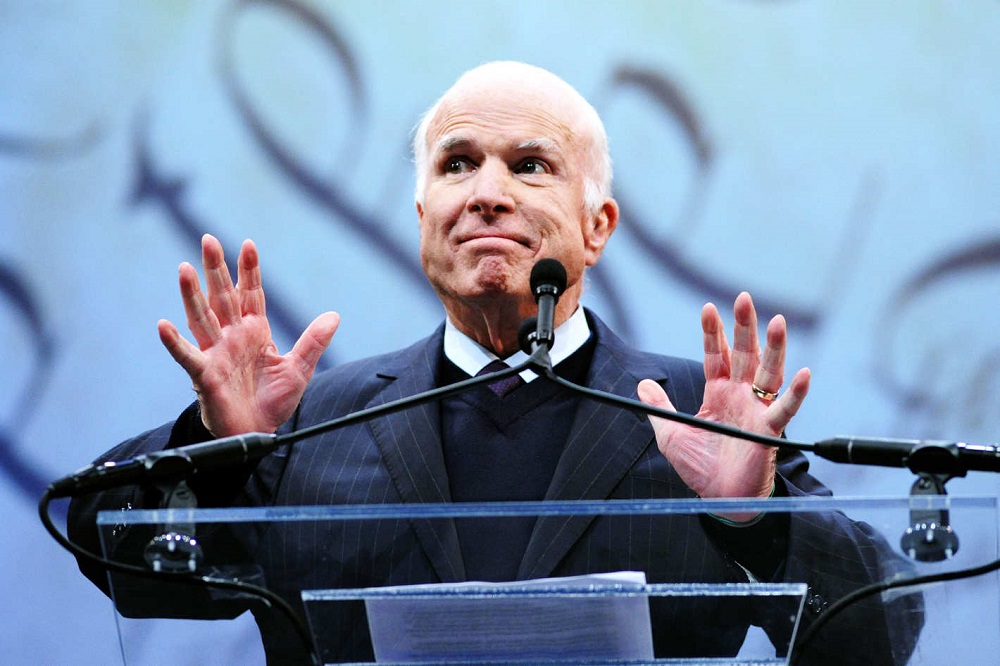 After pulling a much beleaguered Mitch McConnell into the White House Rose Garden to stand beside him on Monday, Donald Trump showed America that he was able to lower the bar even further than anyone imagined when he claimed that he was basically the lone president calling fallen soldiers families. He’s dropped even further by now once again attacking John McCain for the Senators blunt honesty.

McCain, a former Navy pilot who spent 5½ years in a Vietnam prisoner of war camp and is battling brain cancer, offered a simple response to Trump: “I have faced tougher adversaries.”

Trump said in a radio interview with WMAL in Washington, “I’m being very, very nice but at some point I fight back, and it won’t be pretty.” He bemoaned McCain’s decisive vote this past summer in opposition to a GOP bill to dismantle Barack Obama’s Affordable Care Act, a move that caused the failure of GOP efforts to repeal and replace “Obamacare.”

In Philadelphia on Monday night, the six-term Republican senator from Arizona received an award for a lifetime of service and sacrifice to the country. In addition to recalling his more than two decades of military service and his imprisonment during the war, McCain took a moment to go a step further than the night’s other speakers, who lamented what many described as a fractured political climate.

“To abandon the ideals we have advanced around the globe, to refuse the obligations of international leadership for the sake of some half-baked, spurious nationalism cooked up by people who would rather find scapegoats than solve problems,” he said, “is as unpatriotic as an attachment to any other tired dogma of the past that Americans consigned to the ash heap of history.”

He continued: “We live in a land made of ideals, not blood and soil.”

Former Vice President Joe Biden presented McCain with the Liberty Medal. Though members of opposing parties, the two men worked together during their time in the Senate. Former President Barack Obama, who defeated McCain in his bid for the presidency in 2008, congratulated the senator on the award in a tweet Monday night.

“I’m grateful to @SenJohnMcCain for his lifetime of service to our country. Congratulations, John, on receiving this year’s Liberty Medal,” Obama wrote.

I'm grateful to @SenJohnMcCain for his lifetime of service to our country. Congratulations, John, on receiving this year's Liberty Medal.

Another political foe, 2012 GOP presidential nominee Mitt Romney, said on Twitter: “Ran against him, sometimes disagree, but proud to be a friend of @SenJohnMcCain: hero, champion of character and last night, Lincolnesque.”

Pressed on Trump’s threat Tuesday morning, McCain told reporters he has had tougher fights, and then smiled.

Trump said in the radio interview that McCain’s vote against Republican efforts to dismantle the 2010 health care law was a “shocker.”

McCain and Trump have long been at odds. During the campaign, Trump suggested McCain was not a war hero because he was captured in Vietnam. 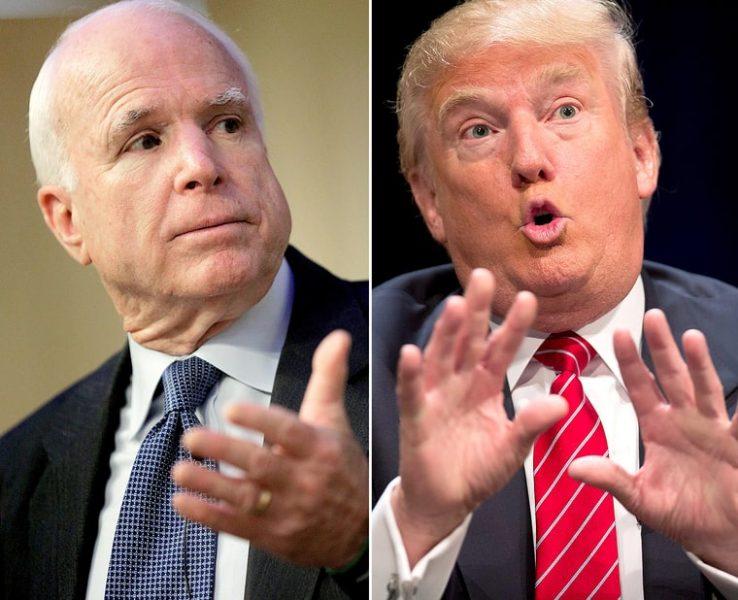 Thank you, Joe, my old, dear friend, for those mostly undeserved kind words. Vice President Biden and I have known each other for a lot of years now, more than forty, if you’re counting. We knew each other back when we were young and handsome and smarter than everyone else but were too modest to say so.

Joe was already a senator, and I was the Navy’s liaison to the Senate. My duties included escorting senate delegations on overseas trips, and in that capacity, I supervised the disposition of the delegation’s luggage, which could require — now and again — when no one of lower rank was available for the job — that I carry someone worthy’s bag. Once or twice that worthy turned out to be the young senator from Delaware. I’ve resented it ever since.

Joe has heard me joke about that before. I hope he has heard, too, my profession of gratitude for his friendship these many years. It has meant a lot to me. We served in the Senate together for over twenty years, during some eventful times, as we passed from young men to the fossils who appear before you this evening.

Thank you, too, to the National Constitution Center, and everyone associated with it for this award. Thank you for that video, and for the all too generous compliments paid to me this evening. I’m aware of the prestigious company the Liberty Medal places me in. I’m humbled by it, and I’ll try my best not to prove too unworthy of it.

Some years ago, I was present at an event where an earlier Liberty Medal recipient spoke about America’s values and the sacrifices made for them. It was 1991, and I was attending the ceremony commemorating the 50th anniversary of the attack on Pearl Harbor. The World War II veteran, estimable patriot and good man, President George H.W. Bush, gave a moving speech at the USS Arizona memorial. I remember it very well. His voice was thick with emotion as he neared the end of his address. I imagine he was thinking not only of the brave Americans who lost their lives on December 7, 1941, but of the friends he had served with and lost in the Pacific where he had been the Navy’s youngest aviator.

“Look at the water here, clear and quiet …” he directed, “One day, in what now seems another lifetime, it wrapped its arms around the finest sons any nation could ever have, and it carried them to a better world.”

He could barely get out the last line, “May God bless them, and may God bless America, the most wondrous land on earth.”

The most wondrous land on earth, indeed.

I’ve had the good fortune to spend sixty years in service to this wondrous land. It has not been perfect service, to be sure, and there were probably times when the country might have benefited from a little less of my help. But I’ve tried to deserve the privilege as best I can, and I’ve been repaid a thousand times over with adventures, with good company, and with the satisfaction of serving something more important than myself, of being a bit player in the extraordinary story of America. And I am so very grateful.

What a privilege it is to serve this big, boisterous, brawling, intemperate, striving, daring, beautiful, bountiful, brave, magnificent country. With all our flaws, all our mistakes, with all the frailties of human nature as much on display as our virtues, with all the rancor and anger of our politics, we are blessed.

We are blessed, and we have been a blessing to humanity in turn. The international order we helped build from the ashes of world war, and that we defend to this day, has liberated more people from tyranny and poverty than ever before in history. This wondrous land has shared its treasures and ideals and shed the blood of its finest patriots to help make another, better world. And as we did so, we made our own civilization more just, freer, more accomplished and prosperous than the America that existed when I watched my father go off to war on December 7, 1941.

To fear the world we have organized and led for three-quarters of a century, to abandon the ideals we have advanced around the globe, to refuse the obligations of international leadership and our duty to remain “the last best hope of earth” for the sake of some half-baked, spurious nationalism cooked up by people who would rather find scapegoats than solve problems is as unpatriotic as an attachment to any other tired dogma of the past that Americans consigned to the ash heap of history.

We live in a land made of ideals, not blood and soil. We are the custodians of those ideals at home, and their champion abroad. We have done great good in the world. That leadership has had its costs, but we have become incomparably powerful and wealthy as we did. We have a moral obligation to continue in our just cause, and we would bring more than shame on ourselves if we don’t. We will not thrive in a world where our leadership and ideals are absent. We wouldn’t deserve to.

I am the luckiest guy on earth. I have served America’s cause — the cause of our security and the security of our friends, the cause of freedom and equal justice — all my adult life. I haven’t always served it well. I haven’t even always appreciated what I was serving. But among the few compensations of old age is the acuity of hindsight. I see now that I was part of something important that drew me along in its wake even when I was diverted by other interests. I was, knowingly or not, along for the ride as America made the future better than the past.

And I have enjoyed it, every single day of it, the good ones and the not so good ones. I’ve been inspired by the service of better patriots than me. I’ve seen Americans make sacrifices for our country and her causes and for people who were strangers to them but for our common humanity, sacrifices that were much harder than the service asked of me. And I’ve seen the good they have done, the lives they freed from tyranny and injustice, the hope they encouraged, the dreams they made achievable.

May God bless them. May God bless America, and give us the strength and wisdom, the generosity and compassion, to do our duty for this wondrous land, and for the world that counts on us. With all its suffering and dangers, the world still looks to the example and leadership of America to become, another, better place. What greater cause could anyone ever serve.

Thank you again for this honor. I’ll treasure it.