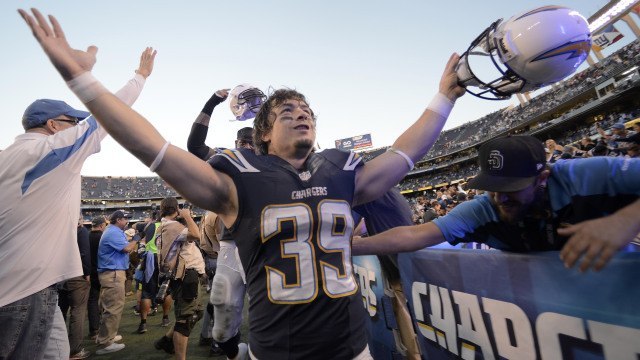 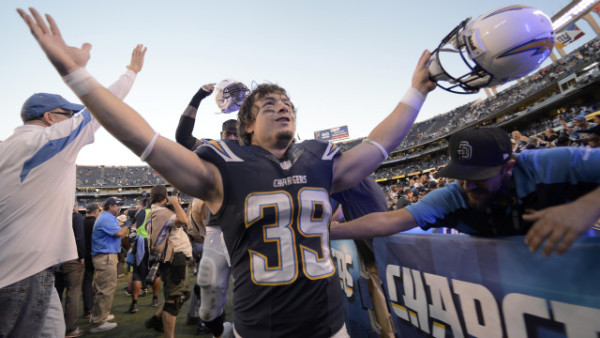 Stick with the mainstream fantasy players this week in big tournaments and you will win $6. Take a risk or three in order to give yourself the best shot at winning real money on DraftKings.

Here are my choices for outliers in each and every NFL game this week. These players are not the most consistent. They are however the ones with that have a shot at some explosive point totals that could sneak you past the sharks and help you quit your day job or, at least, your second job.

Just don’t do anything stupid, like rostering too many outliers.

I hate Thursday games. Too much pressure to get the right picks in with the work week still on my brain. Anything can happen on a short week. That includes Danny Woodhead scoring more TDs. Oakland is not as bad as Miami, who gave up four touchdowns to Woodhead last week, but they are still near the bottom third of the NFL versus running backs.

A streak begins with one game, and Woodhead will be under 5% owned I’m guessing despite what he did last week.

Cousins has the hot hand coming in. However, the contrarian choice of Sam Bradford has the potential to shock the masses. I know, he’s Sam Bradford, but he’s…..well….he’s cheap at $5,100.

There’s no reason to believe Atlanta can slow down Carolina. However, Ron Rivera is cognizant of how dangerous it is to leave his starters in too long. Look for Atlanta to give touches to some unexpected players in order to see who is sent packing in 2016. Wide out Justin Hardy could see as many as eight targets in this one.

Mike Gillislee should get most of the carries for Buffalo on Sunday as Shady sites with an MCL injury. Karlos Williams is not 100% so at $4500, Gillislee is a cheap option that will see volume against a 28th ranked Cowboy defense against opposing runners.

This game is likely to see a lot of points with Detroit winning in a blowout. So either QB is a good choice in a not so enticing game.

Johnny Manziel has done nothing to warrant a start on DraftKings. But there are only two games left for him to prove to the Browns he is the right QB for them, or to show the rest of the NFL that he is still special should the Browns send his immature ass packing.

Can someone just put the Colts out of their misery? This team is hard to watch but easy to beat. Even Miami should be able to score enough to take them out. Which player will do the most damage, though? Better to take a chance on a WR than a running back since the upside is greater in tournaments. Jarvis Landry is a decent choice along with the Miami defense who should retire as a unit if they cannot stop Indy’s impotent offense.

We know the Steelers offense is going to score about 45 on the Ravens. That means the Ravens will need to air it out. Kamar Aiken is still a bargain on DraftKings and scored 18.9 points in the first meeting with Pittsburgh. He will have more targets than the seven he saw in that first contest, and this is not your father’s Steel Curtain defense.

We all know that the Jags defense isn’t really into stopping opposing offenses. They are damn near pacifists on the D-line. But Drew Brees could see an early exit in this game as he has the same injury as Peyton Manning. Surely the Jags D can stop Matt Flynn or rookie Garrett Grayson. I think….

Who is going to rack up points for New England this week? Amendola is very questionable, and Edelman isn’t likely to try to go until at least week 17. I feel better about Ryan Fitzpatrick at QB at home over Brady, who is $2300 more than Fitz. Those savings will make room for one of the Jets dynamic duo at WR and should make up for the difference in Brady and Fitzpatrick’s individual totals.

This one could be one of the worst games of the week. Just the type of game that Jay Cutler could have a fantasy explosion. Paired with his tight end Zach Miller, who had a 30 point day six games back, the Bears QB could be the outlier that puts you in the mix for some real money.

Most people won’t touch any player in this game. Two bad teams in a worse division. Tennessee can’t stop anyone and with Mariota out, don’t look like a threat on offense. That said the Titans D should get some shots at turnovers with Brandon Weeden at QB1 for Houston. Also, Delanie Walker is still viable with a not so bad backup in Zach Mettenberger throwing the ball around.

This seems like a mismatch with the dominant Cardinals playing at home, and it is on paper. But Green Bay is just as good on the road as at home, 5-2 each way. Rodgers is deadly in a dome or great weather which will be the case in Arizona. Even if the Cards rack up 40 points, the Packers will benefit in garbage time with Tyrann Mathieu out of the mix in the Cards’ secondary.

The Rams have an allegedly tough defense. They have fallen off in the second half of the year, though. Look for third-stringer Christine Michael to get the biggest share of carries after gaining 84 last week for Seattle. The Rams will be forced to focus on the passing game with Russell Wilson going legend over the past five weeks.

People are going to be looking for value on the Giants roster to get the volume left with Odell Beckham being suspended. The better option is to go with Stefon Diggs of the Vikings who got back on track last week but has few folks believing in him after a string of poor fantasy games.

NY is 28th against WRs and has been a part of some of the highest fantasy point totals in 2015.

Denver’s defense could be the highest point contributor in this game. So even at $3400, the fifth most expensive defense / special teams, the Broncos are worth the holiday pricing.