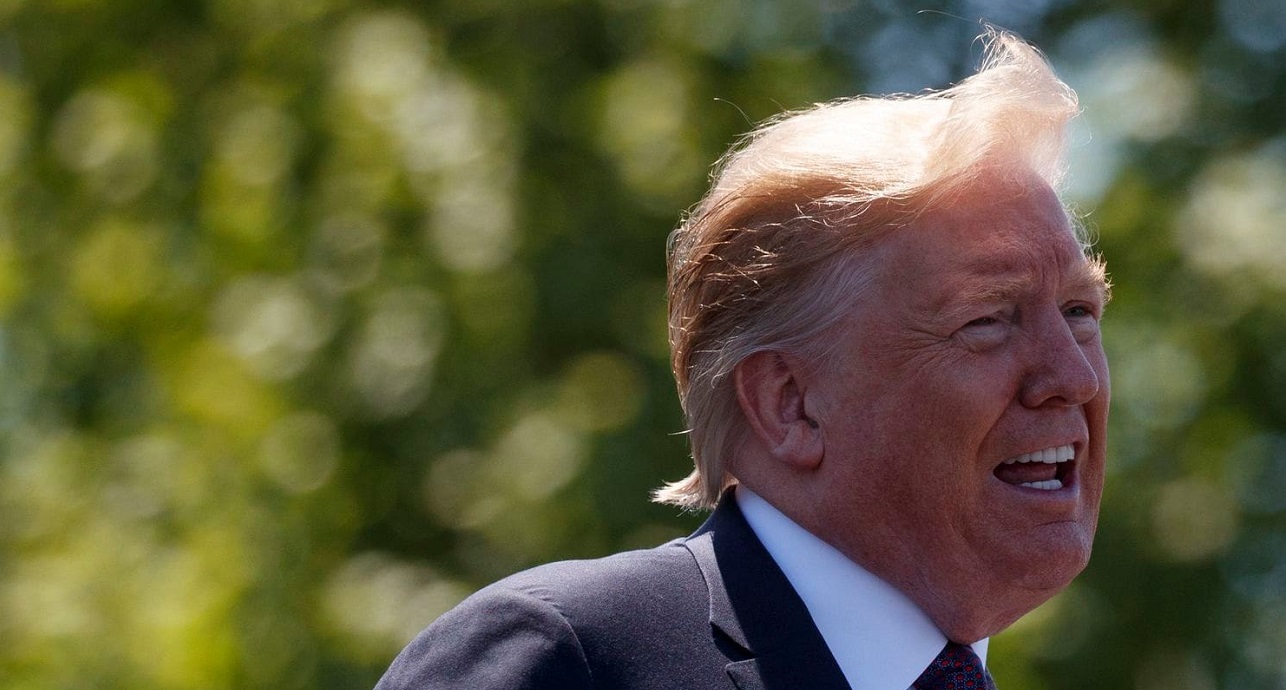 Donald Trump continues working his new immigration plan which is based on ‘merit’ and passing a civics test. It leaves one wondering if Trump would be able to pass that same test. Son-in-law Jerrod Kushner was the architect behind this plan, but he was unable to get big business behind it as he thought they would.

Unveiling a new immigration plan, President Trump said Tuesday he wanted to provide a sharp contrast with Democrats, and he did — aiming to upend decades of family-based immigration policy with a new approach that favors younger, “totally brilliant,” high-skilled workers he says won’t compete for American jobs.

Trump’s sweeping immigration plan is more a campaign document than anything else. It’s a White House attempt to stretch beyond the “build-the-wall” rhetoric that swept the president to office but may not be enough to deliver him a second term. As Trump heads into re-election season, his campaign sees the plan as a way to help him look more reasonable on a signature issue than he often seems — and to cast Democrats as blocking him.

“We want immigrants coming in. We cherish the open door,” Trump said in a Rose Garden speech as Cabinet members and Republican lawmakers filled the front rows.

Trump said his new system, with points given for those with advanced degrees, job offers and other attributes, will make it exactly “clear what standards we ask you to achieve.”

Even before the speech, Democrats, whose votes would be needed for any bill to be approved by the divided Congress, panned the effort and questioned the Trump Republican Party’s commitment to families.

Pelosi continued: “Certainly we want to attract the best to our country.” But she said “merit” is a “condescending” word that means “merit in the eyes of Donald Trump.”

Trump’s new plan has been months in the making, a project of his son-in-law, Jared Kushner, who has been meeting privately with business groups, religious leaders and conservatives to find common ground among Republicans on an issue that has long divided the party.

Kushner, according to people familiar with his thinking, has long complained that many advocates on the immigration issue are very clear about what they’re against, but have much more trouble articulating what they’re “for.” Kushner set out to create a proposal that Republicans might be able to rally around, his mission to give the president and his party a clear platform heading into the 2020 elections.

Trump didn’t mention his son-in-law’s work during the address, but noted that the proposal wasn’t written by politicians. Instead, the president said it had input from law enforcement personnel. It also had echoes of White House senior adviser Stephen Miller, who wants to push down the country’s immigration levels and has driven much of the administration’s policy.

With a humanitarian crisis at the border — officials said this week a fourth child, a 2-year-old Guatemalan migrant, died in U.S. custody — Trump promised to halt illegal border crossings with the “most complete and effective border security package ever assembled.” He did not mention the child’s death.

As part of the plan, officials want to shore up ports of entry to ensure all vehicles and people are screened and to create a self-sustaining fund, paid for with increased fees, to modernize ports of entry.

The plan also calls for building border wall in targeted locations and continues to push for an overhaul to the U.S. asylum system, with the goal of processing fewer applications and more quickly removing people who don’t qualify.

The plan does not address what to do about the millions of immigrants already living in the country illegally, including hundreds of thousands of young “Dreamers” brought to the U.S. as children — a top priority for Democrats. Nor does it reduce overall rates of immigration, as Miller and many conservative Republicans would like.

Republicans in Congress who were briefed on the plan by Kushner and Miller earlier this week welcomed, but did not fully embrace, the approach. Some of those up for re-election, including Sen. Susan Collins of Maine, objected to its failure to account for the young Dreamers. In Colorado, a Democrat running against GOP Sen. Cory Gardner blasted it as part of Trump’s “hateful” immigration agenda that would do nothing but “build Trump’s wall and keep families apart.”

“It’s obviously just a start,” said Texas GOP Sen. John Cornyn, who will be among those running for re-election in 2020. “It’s a clear statement of what our immigration policy should be. … We’re not eliminating family connections, it’s just adding an emphasis on merit.”

At its core, the proposal would fundamentally overhaul how the country for decades has approached immigration. The country has long placed a preference on providing green cards to family members of immigrants.

Under the Trump plan, the country would award the same number of green card as it now does, about 1 million annually. But far more would go to exceptional students, professionals and people with high-level and vocational degrees. Factors such as age, English language ability and employment offers would also be considered.

Far fewer green cards would be given to people with relatives already in the U.S. They would be reserved just for immediate family members — Trump mentioned spouses and children — rather than parents and adult siblings. Fifty-seven percent would be awarded on merit as opposed to the current 12%.

While Trump is seeking to put a softer facade on the top issue from his first campaign, he also is making a direct appeal to his supporters. He says his plan means fewer low-skilled immigrants will compete for low-paying American jobs.

“Our plan is pro American, pro-immigrant and pro-worker,” Trump said, saying it contrasts with what he called Democrats’ support of “chaos.”

Efforts to overhaul the immigration system have gone nowhere for three decades and prospects for an agreement seem especially bleak as the 2020 elections approach.

Mark Krikorian, executive director of the Center for Immigration Studies, which advocates for lower immigration rates, welcomed a “very positive effort” that was “undermined by the embrace of the current very high level of immigration.”

The Senate confirmed Louisiana lawyer Wendy Vitter as a federal judge Thursday, overcoming opposition from Democrats who criticized her anti-abortion stance and accused her of trying to hide her record on the issue.

Maine Sen. Susan Collins was the only Republican to oppose Vitter’s nomination, which was approved 52-45.

A former prosecutor, Vitter is general counsel for the Roman Catholic Archdiocese of New Orleans and an outspoken abortion opponent.

Democrats said Vitter nonetheless failed to disclose hundreds of past statements opposing abortion, including a claim at a political rally that Planned Parenthood is responsible for killing 150,000 women a year. Sen. Patty Murray, D-Wash., called the remark careless, reckless and wrong, and said it showed “incredibly poor judgment for somebody who is being considered for a lifetime judicial appointment.”

Vitter’s remarks, and other comments criticizing abortion, amounted to “the fearmongering of an activist who is entirely unfit for the federal bench,” Murray said.

She and other Democrats said the views of Vitter and other judicial nominees on abortion were increasingly important because of a strict abortion ban signed into law this week in Alabama.

“That legislation is nothing short of an attack on women, and it is part of a larger effort we are seeing today around the country to take away the constitutional right of women to safe, legal abortion and allowing politicians to make decisions for women about their bodies, their health and their lives,” Murray said.

Vitter, who is married to former Sen. David Vitter, R-La., drew widespread opposition from Democrats last year when she refused to say whether she believed the U.S. Supreme Court’s landmark 1954 desegregation ruling in Brown v. Board of Education was correctly decided.

Sen. Richard Blumenthal, D-Conn., who asked Vitter about the Brown case, said “the iconic ruling” by the Supreme Court “is special even among those well-established decisions. Anyone who fails to endorse such a sacrosanct decision is clearly out of the legal and societal mainstream and unworthy of confirmation.”

In a statement Thursday, Collins said Vitter’s remarks on the Brown case and comments “advancing discredited assertions about the impact of contraception and abortion on the incidence of cancer and domestic violence” led her to conclude that Vitter is “not well-suited to serve on the federal bench.”

Collins, who is up for reelection in 2020, said her decision was not based on Vitter’s personal views on abortion, but on whether she could put aside her personal views, especially since Vitter has encouraged doctors to circulate a pamphlet that linked contraception and abortion to cancer and an increased risk of domestic violence. The claims have been widely discredited.

Collins is viewed as a top target for Democrats next year and has drawn fierce criticism over her vote last year in favor of Supreme Court Justice Brett Kavanaugh. Collins, who supports abortion rights, said Kavanaugh assured her during a private meeting that Roe v. Wade, the ruling that established abortion rights, is settled law.

Kavanaugh and Justice Neil Gorsuch, another President Donald Trump appointee, could make the court more willing to cut back on the right to abortion, if not take it away altogether.