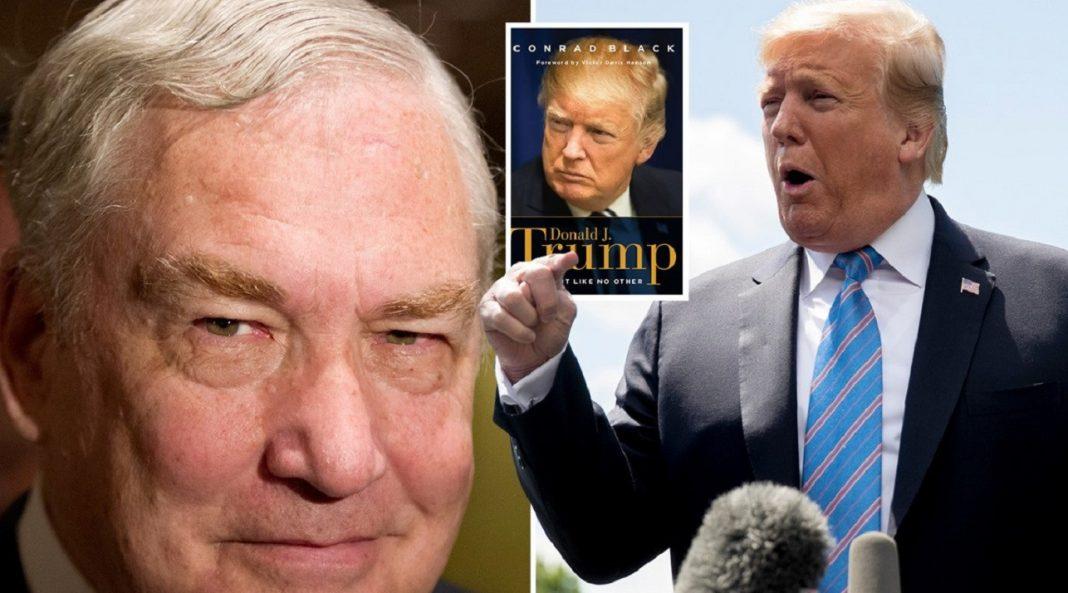 Like China and Russia, Conrad Black has known for decades that when it comes to Donald Trump, flattery will get you everywhere. A campaign promise was kept, and on Wednesday, Trump pardoned Black for fraud and obstruction of justice convictions. One would think that he’s foreshadowing some hope.

Former media mogul Conrad Black, who has lavished praise on U.S. PresidentTrump in countless columns and a political biography, has himself a full presidential pardon on his fraud and obstruction convictions.

Trump had taken notice of Black’s warm words and even previously told him: “I won’t forget!”

In 2015, when Trump was running for president, Black wrote a National Review essay titled “Trump Is the Good Guy” in which he argued that Trump was being unfairly smeared by the political establishment and media. Trump tweeted it was an “honor” to read the piece, adding, “As one of the truly great intellects & my friend, I won’t forget!”

Black was convicted of defrauding investors and obstruction of justice in 2007 and spent just over three years in prison. An appeals court reversed two convictions but left two others in place.

Black, whose empire once included the Chicago Sun-Times, The Daily Telegraph of London, The Jerusalem Post and small papers across the U.S. and Canada, has described Trump as an old friend.

“The only question is why it’s taken this long,” said Robert Bothwell, a professor at the University of Toronto who has known Black for 50 years.

Black has stood out for being Trump’s biggest defender in Canada, a country where the president is very unpopular, and Bothwell said “there really is no question” that Black received the pardon because of his praise of Trump.

“An orangutan that could flatter him could name its own reward,” Bothwell said.

Black’s book “Donald J. Trump: A President Like No Other” came out a year ago to the date he was pardoned.

Black denies his support for the president is the reason.

“I was naturally gratified,” Black told CTV news after the White House made the pardon announcement late Wednesday. “His motive was not that we have known each other cordially for a long time and not the generally supportive things I’ve written and said about him, but that after careful analysis by the White House counsel and legal ombudsmen, they concluded it was an unjust verdict.”

Not everyone was so impressed.

“Trump uses the pardon power like he uses all other presidential powers — for his own self-serving interest,” Weissman said. “Of course, people will and should doubt whether the pardon power is being used properly — because it’s not. I think we should expect more.”

Black and his wife have long been a prominent couple on the social circuit, partying with such celebrities as John and Trump.

A former member of the British House of Lords, the Canadian-born Black was sentenced to more than six years in prison after his 2007 conviction in Chicago but was released on bail two years later to pursue an appeal that was partially successful. A judge reduced his sentence to three years.

Black’s previous big chance to quash his convictions arose in June 2010, when the U.S. Supreme Court sharply curtailed the disputed “honest services” laws that underpinned part of the case against him.

The 7th U.S. Circuit Court of Appeals in Chicago tossed out two of Black’s fraud convictions in 2011, citing that landmark ruling. But it said one conviction for fraud and one for obstruction of justice were not affected by the Supreme Court’s ruling. The fraud conviction, the judges concluded, involved Black and others taking $600,000 and had nothing to do with honest services. It was, they asserted, straightforward theft.

Black — who received the title of Lord Black of Crossharbour — was known for a grand lifestyle, including a $62,000 birthday party for his wife, a swanky apartment on Park Avenue in New York and a trip to the island of Bora Bora.

Black’s three-month trial drew international attention, heightened by his sometimes-haughty comments. When shareholders grumbled about the cost of the Bora Bora trip, he wrote a memo saying: “I’m not prepared to re-enact the French revolutionary renunciation of the rights of the nobility.”

Trump has used pardons to reward ideological allies and figures whose clashes with federal authorities proved popular with his base. He pardoned Joe Arpaio, the former Arizona sheriff convicted of criminal contempt of court in July 2017 for disobeying a court order to stop his traffic patrols that targeted immigrants. He also pardoned Dwight and Steven Hammond, two Oregon cattle ranchers convicted of arson in a case that led to the armed occupation of a national wildlife refuge.

At other times, Trump has intervened in cases championed by celebrities. Alice Marie Johnson, serving life without parole for drug offenses, received a pardon after TV star Kim Kardashian West pressed her case in a White House visit.