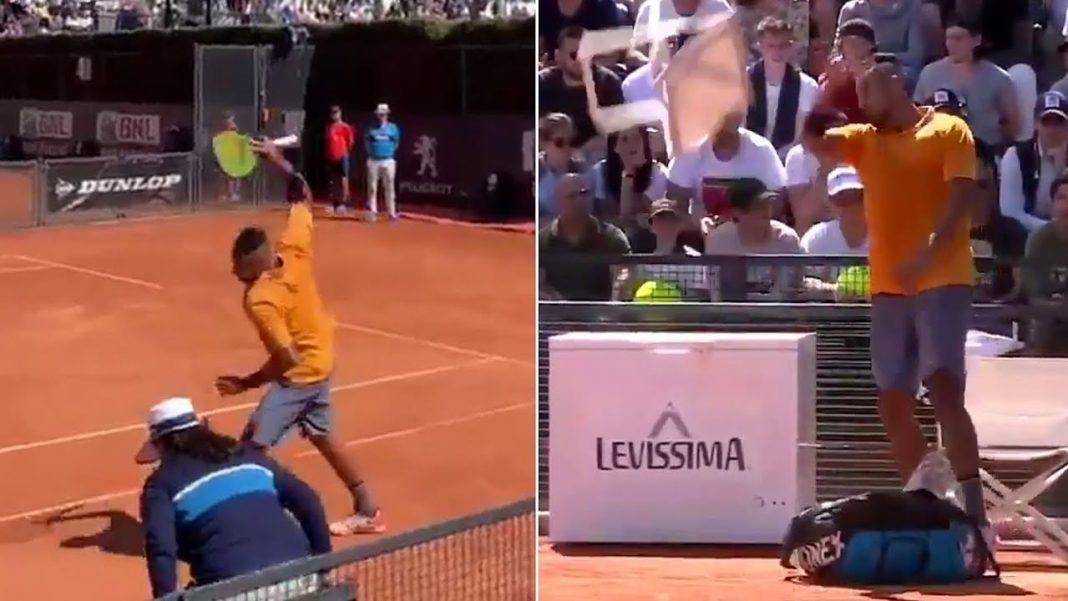 Sports can bring out the worse in some people, and Nick Kyrgios is no different, but his outbursts are becoming more frequent. So frequent, in fact, that they are starting to spark debate among the players.

Nick Kyrgios’ latest outburst of unruly behavior has other players split on whether the temperamental Australian should be handed a long-term ban.

Kyrgios walked off the court and threw a chair onto the red clay during a fit of rage during his second-round match at the Italian Open on Thursday, leading to him being defaulted and fined.

His opponent, Norwegian qualifier Casper Ruud, said that wasn’t enough and called for Kyrgios to be banned for six months or longer.

Roger Federer, though, thinks Kyrgios has already been given an appropriate punishment.

Kyrgios was already suspended by the ATP Tour in 2016 for “tanking” a match and insulting fans during a loss at the Shanghai Masters.

First, Kyrgios slammed his racket to the clay and kicked a water bottle. Then he picked up a white chair and flung it onto the court with his right hand.

Kyrgios was also fined 20,000 Euros for the three unsportsmanlike conduct penalties he received during the match and must cover the cost of his hospitality during the tournament, the ATP said.

“A zero pointer, fine, all this stuff is already tough enough,” Federer added. “He knows it’s a mistake what happened.”

Ruud said many players were debating how long Kyrgios should be suspended for.

“It doesn’t seem like anything makes him change these days,” Ruud said. “The ATP should do something. … I’m not the only one who thinks he should be suspended for at least half a year.”

Before leaving the court, Kyrgios shook hands with Ruud and the chair umpire.

“Very eventful day to say the least,” Kyrgios wrote on Instagram. “Emotions got the better of me and I just wanted to say that the atmosphere was crazy out there today, just super unfortunate that it had to end in a default. Sorry Roma, see you again, maybe.”

“He was getting angry that some guy was walking in between his first and second serve,” Ruud said. “Then he was getting more and more angry. … He does whatever he feels like doing. I think he got what he deserved.”

In 2015, Kyrgios insulted Stan Wawrinka with crude remarks during a match in Montreal. He was fined $12,500 and given a suspended 28-day ban. He also attracted criticism for deciding not to play at the Olympics because of a spat with an Australian team official, and for firing back at retired players who have offered advice.

Top-ranked Novak Djokovic, who is president of the ATP player council, said he had “no opinion” on whether Kyrgios should be suspended.

Also Thursday, Federer, Rafael Nadal and Djokovic each won twice to reach the quarterfinals after a rainout on Wednesday backed up play.

Naomi Osaka also won twice to hold on to the No. 1 ranking.

Against Federer, Coric missed forehands into the net on both of his match points in the tiebreaker. Federer converted his second match point when he forced Coric to hit a difficult, low volley into the net.

The 22-year-old Coric was playing his only match of the day and appeared fresher than the 37-year-old Federer at times. Coric won more points than Federer — 107-95 — but Federer, the 20-time Grand Slam champion, won when it counted.

“It’s nice to get lucky sometimes,” Federer said. “The atmosphere was fantastic. People were going crazy. … I gave him a chance to win it and he didn’t so I took it at the end.”

After getting stretched out wide to the doubles alley, Federer produced a forehand cross-court winner as he broke for a 4-2 lead in the second set.

Federer will next face either local hope Fabio Fognini or Stefanos Tsitsipas.

Spanish veteran Fernando Verdasco spent nearly five hours on court over six sets to get by Dominic Thiem and Karen Khachanov and reach the last eight.

Czech teenager Marketa Vondrousova rallied past Simona Halep 2-6, 7-5, 6-3 for her second win over the Romanian this year.

Halep, who was a finalist in Rome the last two years and is preparing to defend her French Open title, took a medical timeout early in the third set and received treatment on her left leg.

Two-time Wimbledon champion Andy Murray received his knighthood from Prince Charles on Thursday, more than two years after he was awarded the honor by Queen Elizabeth II.

Murray was dubbed by the Prince of Wales during a ceremony at Buckingham Palace, in recognition of his services to tennis and charity.

The knighthood was announced in the queen’s 2016 New Year Honors list after a year in which he won a second Wimbledon title, retained his Olympic singles crown and finished the season as No. 1 in the rankings.

Recipients are allowed to choose when to collect their honor, and the delay was due to a combination of Murray’s hectic schedule and the effect of the knighthood ceremony on his career-threatening hip problem.

Murray announced during a tearful news conference at the Australian Open in January that he plans to retire after Wimbledon this year due to the pain in the joint.

Murray, who turned 32 on Wednesday, has since had a hip resurfacing operation and it’s still unclear whether he can play at this year’s Wimbledon.

After Thursday’s ceremony, Murray issued a statement saying: “I’m very proud to receive it. It’s a nice day to spend with my family — my wife and parents are here. I’d have liked to (have brought) my kids but I think they’re a bit young. I’ll show them the medal when I get home.”

Murray and his wife Kim are parents of 3-year-old Sophia Olivia and 18-month-old Edie.

The Scot won his first Wimbledon title in 2013, ending Britain’s 77-year wait for a male singles champion at the grass-court Grand Slam.