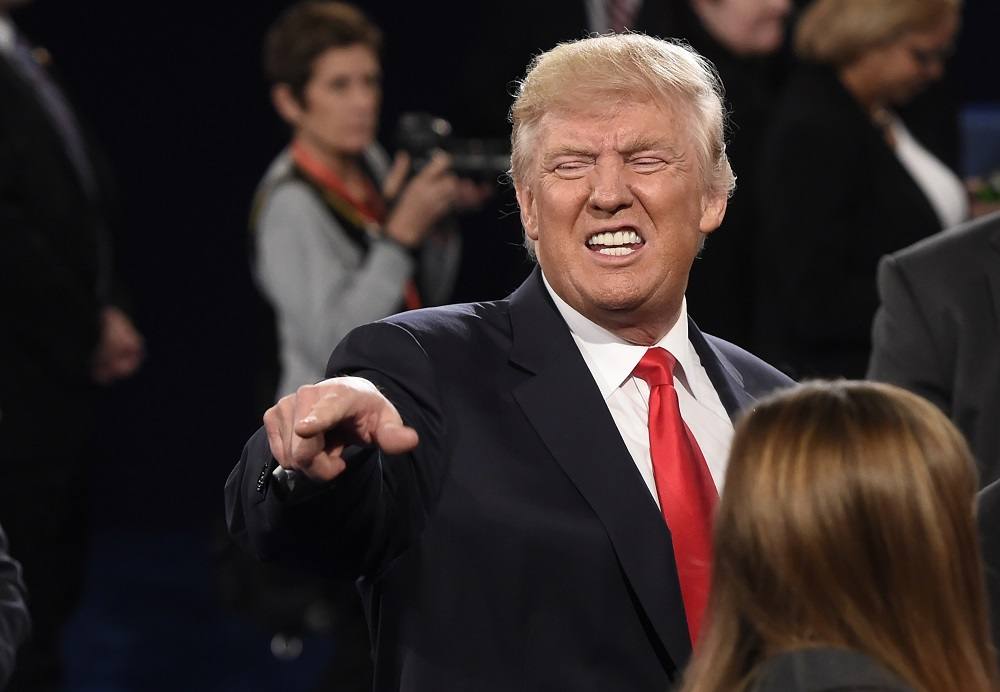 Donald Trump seems to be that one person who loves chaos, and while he appears to be thriving on it, his chances to become the next President of the United States appear to be rapidly dwindling.

According to him, the shocking video that came out on Friday was nothing, and he even told Anderson Cooper during the second debate with Hillary Clinton that he had done none of those things that he boasted about. Smart move as admitting to doing a criminal act wouldn’t have gone done well on national television. Especially when he was threatening to put Clinton in jail if he becomes President.

After claiming that he had not groped or done anything inappropriate, several women suddenly stepped forward to disagree. The New York Times and People ran stories on Wednesday, and now Trump is doing what he does best. Becoming a bully and threatening to sue anyone who makes these claims.

Women have always been his weakest area, and these accusations are hurting him more than he wants to admit, and a recent poll revealed that if only women voted, Hillary Clinton would make a clean sweep into the White House.

Right now, Trump has Julian Assange‘s Wikileaks and Alex Jones InfoWars to help him, but with even Fox News appearing to step back slightly from him, will it be enough to win the election?

@realDonaldTrump: You must believe all of Bill Clinton's accusers, but you can ignore all of mine. #RNC #DNC2016 No laws apply 2 DonaldTrump pic.twitter.com/3L0jlWVA7l

Rocked by allegations of sexual assault, Donald Trump on Thursday lashed out at his female accusers as “horrible, horrible liars” as the deeply divisive presidential campaign sank further into charges and countercharges of predatory treatment of women.

The Republican businessman devoted much of a Florida speech to defending himself against multiple reports of inappropriate sexual behavior – accusations that he blamed on Hillary Clinton’s campaign and the news media.

“These vicious claims about me, of inappropriate conduct with women, are totally and absolutely false. And the Clintons know it,” Trump declared. His accusers, he said, “are horrible people. They’re horrible, horrible liars.”

The comments came minutes after he called a reporter “a sleazebag” for asking whether Trump had ever touched or groped a woman without her consent.

“The belief that you can do anything you want to a woman, it is cruel, it is frightening, and the truth is it hurts,” Obama said. She added, “We can’t expose our children to this any longer, not for another minute, let alone for four years.”

The New York Times and the Palm Beach Post on Wednesday reported stories about three women who alleged Trump had inappropriately touched them. Separately, a People Magazine reporter wrote a detailed first-person account of being attacked by Trump while interviewing the businessman and his wife, Melania Trump.

Trump said the claims “are all fabricated.”

He added, “I will not allow the Clinton machine to turn our campaign into a discussion of their slanders and lies.”

At the same time, Trump’s flailing campaign signaled it would spend the election’s final month relitigating Bill Clinton’s marital affairs and unproven charges of sexual assault, as well as what Trump says is Democratic nominee Hillary Clinton’s role in intimidating the women who were involved.

The developments come less than a week after the publication of a 2005 recording in which the Republican nominee boasted of using his fame to kiss and grab women without their consent.

In an interview broadcast Thursday, the soap opera actress in the video said Trump’s comments were offensive. But actress Arianne Zucker, on NBC’s “Today,” said she wasn’t shocked, given “that type of personality.”

The revelation of the video last Friday prompted many Republicans to withdraw their support for Trump – with some calling for him to drop out of the race – though a handful have since switched back to supporting him.

Clinton adviser Jennifer Palmieri said the latest revelations match “everything we know about the way Donald Trump has treated women.”

Taken together, the stories about Trump and his retorts about Bill Clinton have plunged an already rancorous campaign to new lows. The real estate mogul has also aggressively charged that Hillary Clinton not only needs to be defeated in November but also imprisoned: “Honestly, she should be locked up,” he said Thursday.

And his campaign is facing questions about ties to Russian interests accused of hacking Democratic groups, as well as the hacking of a top Clinton adviser’s emails.

For Trump, the cumulative effect appears to be a tumble in the battleground states he needs to win in November. What was already a narrow path to the 270 Electoral College votes needed for victory is virtually indiscernible for Trump unless there’s a significant shake-up in the race between now and Nov. 8

Rather than trying to make up ground by shifting attention back to issues like trade that have energized Trump backers and could appeal to new voters, the Republican campaign appears to be moving swiftly to make Bill Clinton’s past a centerpiece of its campaign.

Building on Trump’s decision to bring three Bill Clinton accusers to last week’s presidential debate, the Republican nominee is expected to have the women appear with him on stage at rallies and do television interviews, according to a person briefed on the plan but not authorized to discuss it publicly. They were not on stage in West Palm Beach.

The Trump campaign’s hope is to showcase the decades-old accusations to young voters, particularly women, who may not have been old enough to remember the controversies that dogged the Clintons in the 1990s. If the campaign can’t get them to vote for Trump, the hope is that they will stay home and depress turnout, which would likely hurt Democrats.

But it’s unclear whether Trump’s strategy is even aimed at winning the election at this point.

Increasingly, Trump’s campaign feels like an opportunity for longtime Clinton opponents to air decades worth of grievances about the Democratic power couple on the biggest stage in American politics.

Trump confidant and informal adviser Roger Stone has long encouraged Trump to make Bill Clinton’s alleged assaults and the way his wife treated his accusers a centerpiece of the campaign. Steve Bannon, the campaign’s chief executive, ran Breitbart News, a conservative website that eagerly promotes conspiracy theories about the Clintons.

Hillary Clinton, who is on pace to become America’s first female president if her lead holds, has tried to stay above the fray. She has yet to respond directly to Trump’s decision to resurrect accusations about her husband.

Back in New Hampshire, Michelle Obama said, “Enough is enough.”

“This has got to stop right now. Because consider this: If all of this is painful to us as grown women, what do you think this is doing to our children?”