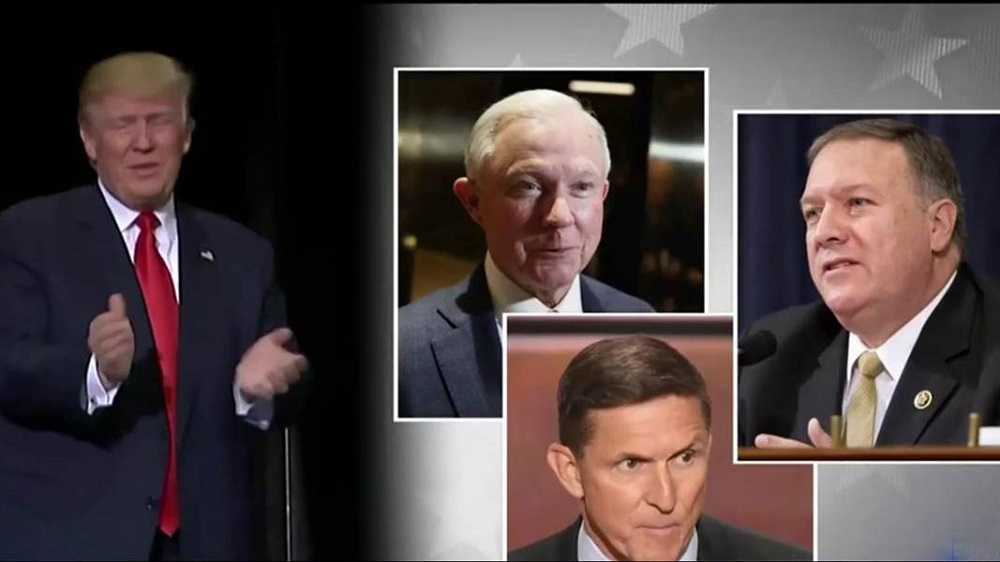 After sending out several test balloons, it appears that Donald Trump is showing that his national security team will be making Republicans happy.

President-elect Donald Trump signaled a sharp rightward shift in U.S. national security policy Friday with his announcement that he will nominate Alabama Sen. Jeff Sessions as attorney general and Kansas Rep. Mike Pompeo to head the CIA, turning to a pair of staunch conservatives as he begins to fill out his Cabinet.

Trump also named retired Lt. Gen Michael Flynn as his national security adviser. A former military intelligence chief, Flynn has accused the Obama administration of being too soft on terrorism and has cast Islam as a “political ideology” and driver of extremism.

Sessions and Flynn were ardent Trump supporters during the campaign, and their promotions were seen in part as a reward for their loyalty.

The selections form the first outlines of Trump’s Cabinet and national security teams. Given his lack of governing experience and vague policy proposals during the campaign, his selection of advisers is being scrutinized both in the U.S. and abroad.

Trump’s initial decisions suggest a more aggressive military involvement in counterterror strategy and a greater emphasis on Islam’s role in stoking extremism. Sessions, who is best known for his hard-line immigration views, has questioned whether terror suspects should benefit from the rights available in U.S. courts. Pompeo has said Muslim leaders are “potentially complicit” in attacks if they do not denounce violence carried out in the name of Islam.

Pompeo’s nomination to lead the CIA also opens the prospect of the U.S. resuming torture of detainees. Trump has backed harsh interrogation techniques that President Barack Obama and Congress have banned, saying the U.S. “should go tougher than waterboarding,” which simulates drowning. In 2014, Pompeo criticized Obama for “ending our interrogation program” and said intelligence officials “are not torturers, they are patriots.”

In a separate matter Friday, it was announced that Trump had agreed to a $25 million settlement to resolve three lawsuits over Trump University, his former school for real estate investors. The lawsuits alleged the school misled students and failed to deliver on its promises in programs that cost up to $35,000.

Trump has denied the allegations and has said repeatedly he would not settle. New York Attorney General Eric Schneiderman, who announced the settlement, called it “a stunning reversal by Donald Trump and a major victory for the over 6,000 victims of his fraudulent university.”

Messages seeking comment from Trump attorneys and a spokeswoman were not immediately returned.

On Friday night, Vice President-elect Mike Pence became the latest celebrity to attend the Broadway hit show “Hamilton” – but he was the first to get a sharp message from a cast member from the stage.

Actor Brandon Victor Dixon, who plays Aaron Burr, the nation’s third vice president, recited a message from the stage after the curtain call: “We, sir, are the diverse America who are alarmed and anxious that your new administration will not protect us, our planet, our children, our parents, or defend us and uphold our inalienable rights,” he said. “We truly hope this show has inspired you to uphold our American values and work on behalf of all of us.”

Pence’s appearance at the show drew both cheers and boos. Pence ducked out before Dixon finished the unprecedented message. But a show spokesman said Pence stood in the hallway outside the entrance to the auditorium and heard the full remarks.

Trump did not announce his Cabinet choices in person, instead releasing a statement. He has made no public appearances this week, holing up in his New York skyscraper for meetings. He is spending the weekend at his New Jersey golf club.

Sessions and Pompeo would both require Senate confirmation before assuming their designated roles; Flynn would not.

Members of minority groups have voiced alarm at Trump’s staff appointments so far, saying his choices threaten national unity and promise to turn back the clock on progress for racial, religious and sexual minorities. They say comments attributed to Trump’s picks could embolden some Americans to lash out at members of minority groups

Most of Trump’s nominees are expected to be confirmed relatively easily given the GOP majority in the Senate. However, potential roadblocks exist, particularly for Sessions, the first senator to endorse Trump and one of the chamber’s most conservative members.

His last Senate confirmation hearing, in 1986 for a federal judgeship, was derailed over allegations that he made racist comments, including calling a black assistant U.S. attorney “boy” in conversation. Sessions denied the accusation but withdrew from consideration.

Sessions would bring to the Justice Department a consistently conservative voice. He has objected to the planned closure of the Guantanamo Bay detention facility and has given prominence to the specter of voting fraud, a problem that current Justice Department leaders believe is negligible.

Pompeo, who graduated first in his class at the U.S. Military Academy at West Point, is a conservative Republican and a strong critic of Obama’s nuclear deal with Iran. He has said former National Security Agency contractor Edward Snowden should enjoy due process and then be sentenced to death for taking and releasing secret documents about surveillance programs in which the U.S. government collected the phone records of millions of Americans.

Anthony Romero, the director of the American Civil Liberties Union, said Pompeo’s views raise concerns about “privacy and due process.”

On Saturday, Trump was to meet with retired Gen. James Mattis, a contender to lead the Pentagon. He was also meeting with 2012 Republican presidential nominee Mitt Romney, who lambasted Trump as a “con man” and a “fraud” in a stinging speech in March. Trump responded by repeatedly referring to Romney as a “loser.”