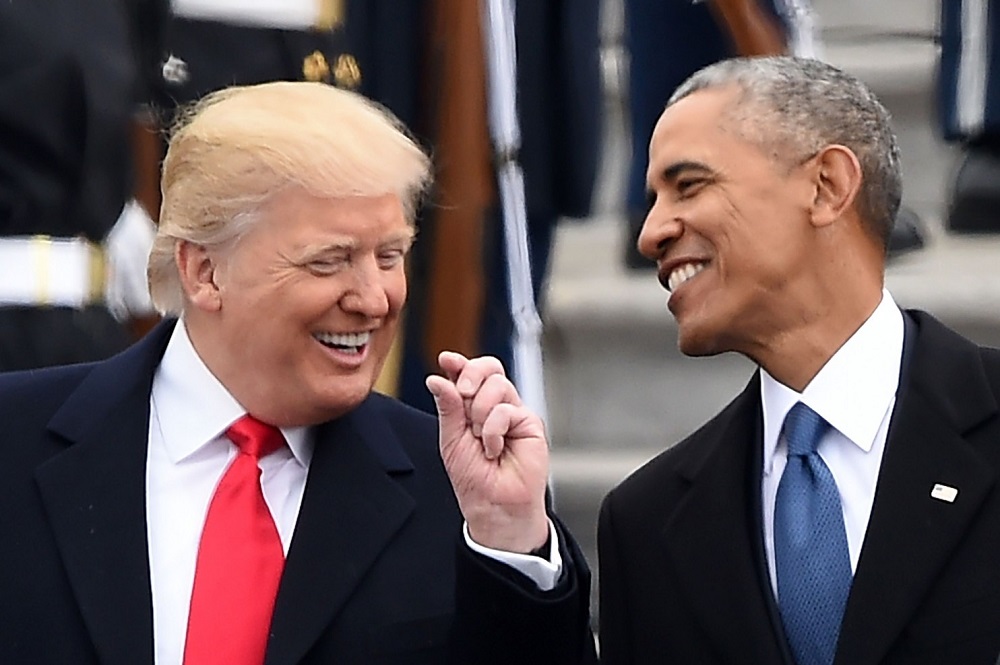 While many media pundits question why Donald Trump chose to go out of the box with healthcare first, it only shows they still don’t understand our president yet. The fact that something in his office still has the Barack Obama name on it drives him crazy, and he is determined to get that out as soon as possible.

Just seeing how he’s suddenly wrongfully attacking Obama for everything from the Yemen raid, wiretapping Trump Plaza, to releasing 122 vicious prisoners shows his hand. He knows that he’s in the shadow of Obama, and he hates it but not enough to be stupid and destroy the parts of Obamacare that voters like and need. Republicans aren’t so stupid to know that if voters in their district lose healthcare, they’re out of a job in 2018.

The new Healthcare Bill has already caused problems on the Hill as many Republicans are saying it goes against what Trump originally promised with all those ‘repeal and replace’ campaign promises. Trump is quickly learning that he’ll more than likely have to make some hard compromises if he wants his first bill to go through.

“This is not the Obamacare repeal bill we’ve been waiting for. It is a missed opportunity and a step in the wrong direction,” said Republican Sen. Mike Lee of Utah on Tuesday. His colleague Sen. Rand Paul, R-Ky., has derided this plan as “Obamacare Lite!”

After the huge mess his administration made with the immigration ban, he needs a win badly. Even WikiLeaks wasn’t able to take over the media coverage Tuesday and let him have a little peace. Julian Assange seems to have timed that CIA leaks release to help out the president, but it’s looking like it wasn’t controversial enough to take the heat away.

On Wednesday, another healthcare bill will be coming from Republican Senator Rand Paul and his group that is a real repeal and replace. Even Trump knows not to knock it even though he tried to make his bill sound like the be all, end all. It will be a long road trying to appease both parties.

So here’s what’s in and what’s been taken out of Obamacare.

Insurers would still be banned from rejecting people with pre-existing conditions,    although the protection would come with a major difference from Obamacare.

While insurers won’t be allowed to turn down people who try to sign up for insurance once after they get sick, they can sock them with a hefty surcharge of 30 percent that first year. You also will have to pay the surcharge if you have not had health insurance previously as an adult.

OUT: The mandate to buy insurance.

The mandate is gone, along with the annual fine assessed at tax-filing time. People who feel they don’t want to buy health insurance are free to do so – at their own risk. If they go without insurance for longer than two months, they’ll get hit with that same 30 percent surcharge faced by sick people who belatedly purchase health insurance.

IN: Coverage of young adults

Young adults will be able to stay on their parents’ plans until the age of 26, just as they could under a popular provision of Obamacare.

Under Obamacare, older people could be charged more for insurance, but only three times more than younger people. Under the proposal, that changes to five times more.

The list of things an insurance plan must cover remains the same as under Obamacare. That means prescriptions, lab work, maternity benefits, hospitalization, mental health and substance abuse, as well as preventive services like immunizations and mammograms.

Taxes on wealthy earners, including a 3.8 percent Medicare tax on investment income, would be eliminated. Also cut would the “tanning bed” tax, which was an unpopular excise tax on indoor tanning sales.

IN: The ban on a lifetime cap

Again, a popular component of Obamacare has been retained in the GOP plan. Before Obamacare, severely disabled children used to hit their lifetime cap while still in childhood.

OUT: Tort reform and buying insurance across state lines.

These two planks in Trump’s health platform are not in the American Health Care Act. However, the president tweeted that more changes will eventually be coming.

A powerful conservative backlash threatened to sink the new Republican health care bill Tuesday less than 24 hours after its launch, even as President Donald Trump and congressional leaders began trying to sell the legislation as the long-promised GOP cure for “Obamacare.”

But major obstacles loomed as key Republican lawmakers announced their opposition, and one conservative group after another torched the plan. The Club for Growth, Heritage Action for America, Americans for Prosperity and Tea Party Patriots variously derided the new bill as Obamacare Lite, Obamacare 2.0 and even RyanCare, in a dig at House Speaker Paul Ryan of Wisconsin.

The new GOP plan would repeal the current law’s unpopular fines on people who don’t carry health insurance. It also would replace income-based subsidies, which the law provides to help millions of Americans pay premiums, with age-based tax credits that may be skimpier for people with low incomes. Those payments would phase out for higher-earning people.

The legislation also would limit future federal funding for Medicaid, which covers low-income people, about 1 in 5 Americans. And it would loosen rules that Obama’s law imposed for health plans directly purchased by individuals.

Republican supporters and opponents are all intent on reducing the role of government in health care, but some House conservatives say the new bill doesn’t go nearly far enough.

For example, they are focusing on the system of refundable tax credits they denounce as a costly new entitlement. They’re demanding a vote on a straightforward repeal-only bill.

The concerted conservative opposition was a remarkable rebuke to legislation GOP leaders hope will fulfill seven years of promises to repeal and replace Barack Obama’s Affordable Care Act, pledges that played out in countless Republican campaigns for House and Senate as well as last year’s race for president. Instead, the groups that are uniting to oppose the new House legislation include many that sprang up to oppose passage of “Obamacare” in the first place.

“As the bill stands today, it is Obamacare 2.0,” the billionaire Koch Brothers-backed Americans for Prosperity and Freedom Partners Chamber of Commerce said in a statement. “Millions of Americans would never see the improvements in care they were promised, just as Obamacare failed to deliver on its promises.”

The new GOP plan would repeal the current law’s unpopular fines on people who don’t carry health insurance. It also would replace income-based subsidies, which the law provides to help millions of Americans pay premiums, with age-based tax credits that may be skimpier for people with low incomes. Those payments would phase out for higher-earning people.

The Republican legislation would limit future federal funding for Medicaid, which covers low-income people, about 1 in 5 Americans. And it would loosen rules that Obama’s law imposed for health plans directly purchased by individuals.

Republicans are pushing forward even without official estimates from the Congressional Budget Office on the cost of the bill and how many people would be covered, although GOP lawmakers acknowledge they can’t hope to match the 20 million covered under Obamacare .

Democrats say the bill would leave many people uninsured, shifting costs to states and hospital systems that act as providers of last resort. The bill also adds up to big tax cuts for the rich, cutting more than 20 taxes enacted under Obama’s heath law with the bulk of the savings going to the wealthiest Americans.

“This is a tax cut for the wealthy with some health insurance provisions tacked alongside of it,” said Senate Minority Leader Chuck Schumer, D-N.Y.

Many conservatives are hardly happier.

The new legislation is “not the Obamacare replacement plan, not the Obamacare repeal plan we’ve been hoping for. This is instead a step in the wrong direction,” Sen. Mike Lee, R-Utah, said at an afternoon news conference with Sen. Rand Paul of Kentucky and members of the House Freedom Caucus.

Caucus members command enough votes to take down the bill in the House, but the group’s chairman, Rep. Mark Meadows of North Carolina, struck a conciliatory tone, emphasizing they are open to negotiation and view the leadership bill as a starting point.

Notes of caution also came from GOP governors, with Ohio Gov. John Kasich arguing that phasing out expanded Medicaid coverage without a viable alternative is “counterproductive” and Gov. Bruce Rauner of Illinois’ saying he was “very concerned” that people will be “left in the lurch” under the House GOP plan.

Committee votes on the new bill are to begin Wednesday in the House, and GOP leaders hope to push it through the Senate as well soon thereafter.

Even as some Republicans expressed doubts about whether that would be possible, Speaker Ryan said at an afternoon news conference, “We’ll have 218 when this thing comes to the floor I can guarantee you that.” That’s the number of votes needed for passage.

Health and Human Services Secretary Tom Price appeared in the White House briefing room to defend the bill. He stood next to a small table with a copy of the new bill, just 123 pages, next to the original Obamacare legislation, many times that size. Republicans frequently criticized the Affordable Care Act as overly lengthy.

“The president and the administration support this step which we believe is in the right direction,” Price said. Still, he added, “This is a work in progress.”