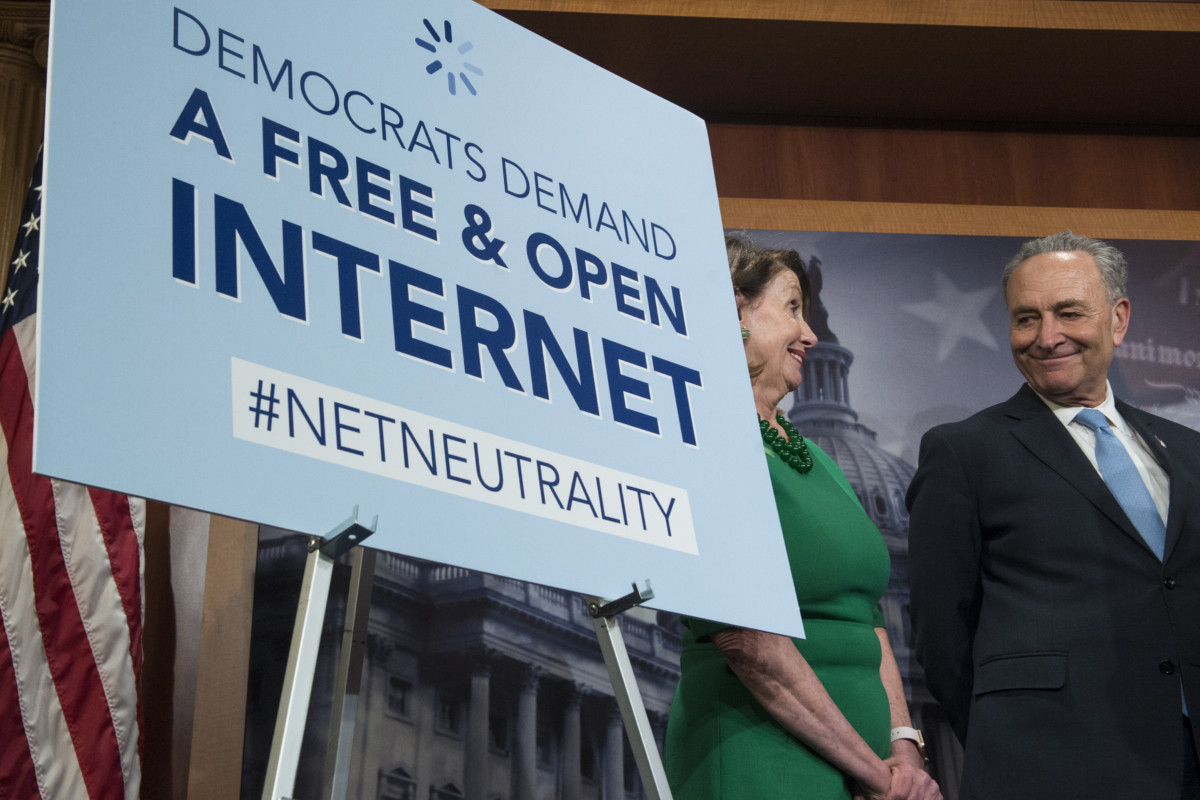 “Net neutrality” is back as an issue for the Democrats and Republicans to go to battle over. Top Democrats in the House and Senate are announcing a new bill to restore the 2015 “net neutrality” rules that Trump-era regulators repealed.

Speaker Nancy Pelosi and Senate Minority Leader Chuck Schumer were among the senators and congresspeople who announced the Save the Internet Act Wednesday. It’s being introduced in both the House and the Senate and aims to codify the previous protections in law. Schumer called it a “real bipartisan effort,” and hearings on the legislation are set to begin next week.

The 2015 Federal Communications Commission regulation barred internet service providers like Verizon, AT&T and Comcast from playing favorites with websites and apps. A Republican-controlled FCC overturned the rules in 2017. Tech companies and nearly two dozen states then sued the FCC; that case is still ongoing.

The Save the Internet Act, which seeks to nullify the FCC’s ruling, has support from a number of senators, though Democrats face an uphill battle in their attempt to pass it into law. They hold sway over the House, but they’ll need to push the legislation through the Republican-controlled Senate and will require President Donald Trump‘ to give it the green light.

If the bill passed the Democratic-controlled House, it would face a tough challenge in the Senate, where Republicans have the majority. The White House also supported the repeal of the net neutrality rules in 2017. Several states have already passed their own version of net neutrality laws, and some governors have demanded ISPs maintain the original rules if they hope to get state contracts.

Having such a high profile bill in play could highlight net neutrality as an issue as the 2020 campaigns get going.

Are Electric Cars About To Go Mainstream?

For years, there have been lots of electric cars proudly rolled out at auto shows but few on the streets or at dealers. That could be about to change.

The electric cars under the lights at the Geneva International Motor Show promise to be the leading edge of more affordable, longer-range vehicles that start to move battery cars out of their niche — as a product for environmentalists willing to put up with limited range and wealthy enthusiasts of new technology willing to pay for buzz and the robust but silent acceleration the cars offer.

Several broad underlying trends are converging to increase the likelihood that larger numbers of battery cars will be on the roads in the next several years.

Prices are falling for batteries, consumers are turning away from diesel engines after Volkswagen’s emissions scandal, and governments in Europe and China are enforcing tougher emissions rules.

As more electric cars roll off assembly lines, the trick will be getting more people to buy them. A key factor will be price — of the battery to the manufacturer, and consequently of the car to the customer.

Volvo Car Group’s Polestar 2 and Peugeot’s new electric 208 compact are electric offerings aimed at bringing battery-powered cars within reach of more people. The Polestar 2 launch version, expected in 2020, starts at $55,500 after the $7,500 U.S. tax incentive; the Europe price starts at 59,000 euros. A less expensive model is envisioned after the first year. Polestar says the model is aimed at the same potential customers as the Model 3 electric compact from California carmaker Tesla.

Tesla said last week it will close many of its stores and move to online sales only so it can cut costs and reach its goal of selling the Model 3 for $35,000. Before the announcement the lowest price was $42,900.

“You need a decent offer of a premium electric car that makes it accessible,” he said. “There are a lot of brands pitching into the region above 80,000 euros ($90,600), so the offer there is getting broader, but below, in the area between 40,000 and 60,000 euros, it’s still relatively limited and I think Polestar coming in there will help accelerate things.”

And then there’s Volkswagen. The world’s largest car maker, which sold 10.83 million cars last year across 12 brands including Audi and Porsche, is refitting its plant in Zwickau, Germany, to produce electric vehicles, the first of eight battery vehicle plants worldwide. Zwickau is to produce 100,000 ID model vehicles next year on what the company says will be a carbon-neutral basis, boosting Volkswagen’s output of electric earlier models to 150,000. Overall, the division aims to sell a million electric cars a year, or about a fifth of the Volkswagen brand’s sales, by 2025.

He said the company can do that through efficient, large-scale production. The ID compact heads into production in November and should go on sale in spring 2020, with a base model available for under 30,000 euros ($34,000).

The company is spending 11 billion euros on new technology through 2023, the bulk of that on developing electric cars.

“This is Volkswagen’s typical DNA,” Brandstaetter said. “Making cars for millions, not e-mobility for millionaires.”

According to Mark C. Newman, managing director and senior analyst at research firm Bernstein, falling battery prices are bringing the day closer when electric cars become as cheap as gasoline and diesel models.

The estimate for 2018 battery pack prices is below $130 per kilowatt hour for the most efficient manufacturers. That is down from $1,000 per kilowatt hour in 2010, and closing in on the $120 per kwh level that the International Energy Agency estimates will make a compact battery car cheaper to own and operate than its internal combustion cousins at Europe’s high gasoline prices.

Bernstein foresees cost parity by 2022-23 and estimates that global market share of battery and hybrid cars will rise to between 9.6 percent and 17.7 percent by 2025. Last year it was 2.1 percent.

Regulation is playing a key role.

European carmakers will need a growing share of zero local emission vehicles to meeting European Union requirements for lower emissions of carbon dioxide by 2021, and even lower emissions thresholds in 2025 and 2030. If they don’t, they could pay thousands of euros in fines per vehicle. China is requiring carmakers to increase the share of alternative energy vehicles through a points system that gives more credit to low-emission, longer-range electric vehicles.

Things may change more slowly in the United States, where the administration of U.S. President Donald Trump is moving to ease higher mileage requirements from the Obama administration. Still, California is pushing for more battery-powered vehicles and hybrids, which use both batteries and internal combustion engines. It says 8 percent of new car sales could be electrics, hybrids or other low emission vehicles by 2025.

An example of how regulation can promote electrics is Norway, where a raft of incentives has pushed the market share of plug-in vehicles to 39 percent last year. By contrast, China was at 4 percent, Germany at 1.8 percent and the U.S. at 2.1 percent.

Gil Tal, director of the Plug-in Hybrid & Electric Vehicle Research Center at the University of California-Davis, says “you will see larger numbers three years from now,” largely driven by subsidies and incentives at the outset.

“There’s a huge gap between the number of electric cars you see at an auto show and how many cars the dealer will offer you,” he said. “It’s kind of hard to ask the market for huge demand when there is no supply.”

“You need to stock the shelves first.”

Now that AT&T’s $81 billion takeover of Time Warner is a done deal, the company is reorganizing its TV and movie businesses to emphasize streaming rather than cable TV networks.

AT&T is bringing in a new executive as longtime HBO and Turner chiefs leave. It’s also consolidating operations for different brands to help generate more video for a new streaming service launching this year. Layoffs are expected in the business now known as WarnerMedia, although the company tried to assuage fears that there will be substantial job cuts.

With the revamp, AT&T is “trying to move the organization to a new business model,” said Michael Smith, a Carnegie Mellon information technology and marketing professor.

AT&T said the reorganization will give it “agility and flexibility” to better coordinate original programming across its brands and distribute them through emerging platforms such as streaming.

The company has been ramping up the streaming services that it sells to customers directly as it tries to maneuver the shift to internet video and reckon with the increasing number of people who don’t want to pay for a $100 cable bundle. It has been losing customers in its DirecTV satellite TV business.

AT&T launched a streaming service with live TV channels, DirecTV Now, in 2016. The service has already had its bumps, losing customers for the first time in the most recent quarter as AT&T ended deep discounts. AT&T also debuted a cheaper live-TV service, WatchTV, in 2018.

Breaking down walls between WarnerMedia’s individual brand empires could result in layoffs and save the company money. But more importantly, it will help spark more ideas and thus more video overall for AT&T to distribute and sell ads against, CFRA Research analyst Keith Snyder said.

“They want a lot more content coming out of Warner,” he said. “That’s going to help them launch the streaming service and go up against Disney. They really need to start generating more content. … This reorganization is aiming at that more than anything.”

The company tried to emphasize that the reorganization was more about content strategy and less about layoffs. “I don’t think there are big massive layoffs coming,” Greenblatt said in an interview with trade publication Variety. WarnerMedia spokesman Keith Cocozza said there weren’t any decisions yet on layoffs.

Wells Fargo analyst Jennifer Fritzsche wrote in a note to investors last week that one immediate concern is whether the departures by longtime Time Warner leaders would affect the key staffers that make WarnerMedia’s shows and movies.

AT&T argued that it needed to buy Time Warner, in one of the biggest media deals on record, to compete with tech giants such as Google and Facebook that grab the bulk of internet ad dollars in the U.S. today. AT&T wants to build a digital advertising business, with ads tailored to customers, on the back of that video. More video means more potential ad dollars and, perhaps, more subscribers.

The Turner TV business had been operating as a standalone entity under an agreement with the government until AT&T won again in court last week. Now AT&T can change Turner’s staffing levels — there are often layoffs after big mergers — and be involved in its deals with cable companies.

AT&T also said Monday that CNN leader Jeff Zucker is adding sports to his duties and will become chairman of WarnerMedia News & Sports. Kevin Tsujihara will remain the head of the Warner Bros. studio but take on leadership of a new business to bring together the company’s family, kids and animation efforts.