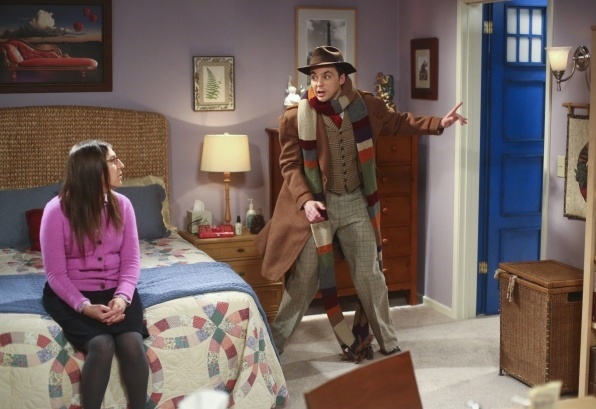 On this week’s episode of The Big Bang Theory Sheldon was preparing to leave for a trip. He had created a Public Bathroom Kit (PBK) to use during his trip, since he is a germaphobe. As Leonard and Sheldon left for their road trip he asked him to play a car game with him. They then talked about visiting Berkeley University to talk about the academic paper they had written together.

The gang came to help Bernadette and Howard clean out the garage of Howard’s late mom. Howard had a full replica of the Tardis from Dr. Who in his mother’s garage and Bernadette had marked as an item to be included in their garage sale.

On the road trip Sheldon said that their hotel was near the Skywalker Ranch and they should visit it because they were pretty likely to get to their hotel too early in the day to be able to check in. Leonard said because it is George Lucas’s headquarters they probably wouldn’t be allowed inside but that they could still go see the place.

While organizing the garage Raj and Penny found a table tennis table and set it up to play. Penny then asked Bernadette and Howard when they planned to move into his late mother’s house. They said that first they had to figure out how much remodeling they wanted to do on it. Amy then brought up the subject of the Tardis again and Howard said that he wasn’t going to sell it. Bernadette said he would have to arm wrestle her to keep it. It was then suggested that the two compete in a game of table tennis instead. Penny then said she would stand in for Bernadette in an attempt to help her get rid of the Tardis. Howard said that wasn’t fair because she has strong upper body muscles. Raj then said he was a badminton champion in high school and Howard said he wanted Raj to play on his behalf.

Leonard and Sheldon then arrived outside the Skywalker Ranch. Sheldon was shocked to see that it was just a gate on the road. Leonard then commented that the place wasn’t even very hard to find. They both excitedly agreed that the Skywalker Ranch was amazing. Sheldon told Leonard to drive up to the speaker box on the gate at the entrance to the ranch to see if they could get in. Leonard said he was nervous to do so but Sheldon said Leonard had to deal with his nerves and learn to have confidence in himself. Leonard then pushed the speaker button and Sheldon freaked out and said Leonard was out of his mind. The gate then opened and Leonard drove in. He then pulled up to the security guard on the property. The security guard said he couldn’t let them in but he had hats and T-shirts that he could give them. Sheldon then got out of the car and ran away and the security guard got on his walkie talkie and alerted the ranch staff that an unauthorized person was on the premises. He then got chased by security guards with tasers, who shot at him with the tasers.

Back at the house the gang watched Raj and Penny compete in their game of table tennis. Bernadette then faked Raj out by telling him if Howard lost the right to keep the Tardis, Raj could take it home with him.

Back at the Skywalker Ranch, Leonard and Sheldon were waiting in the security office and Sheldon asked Leonard if he thought that security would call the police. The two argued that an imperial officer or a storm trooper would be called. Leonard then got up and walked away while Sheldon talked to another guy waiting in the security office. The guy had hopped a fence into the ranch and was caught making out with a Chewbacca statue. Upon hearing this, Sheldon then got up and walked away too. Sheldon and Leonard were then warned that they had to leave and if they ever came back charges would be pressed against them.

Turning the tables on the tennis competition, Amy went up against Raj. Amy played so badly that Raj won, much to the chagrin of Howard.

As Leonard and Sheldon arrived back home after their trip Leonard told Sheldon he was still mad at him. He said that they missed their lecture, were almost arrested and got locked into the security office room because of Sheldon’s actions. Sheldon told Leonard he should just be proud that they made it into the Skywalker Ranch and that most people don’t make it inside. He also pointed out that for all the times Sheldon annoyed Leonard he should be happy he saw Sheldon get tasered. They then agreed that the experience was going to be one they would always remember.

Amy ended up with the Tardis in her apartment and Sheldon was excited to find this out. He came into the bedroom of her apartment dressed as Dr. Who.