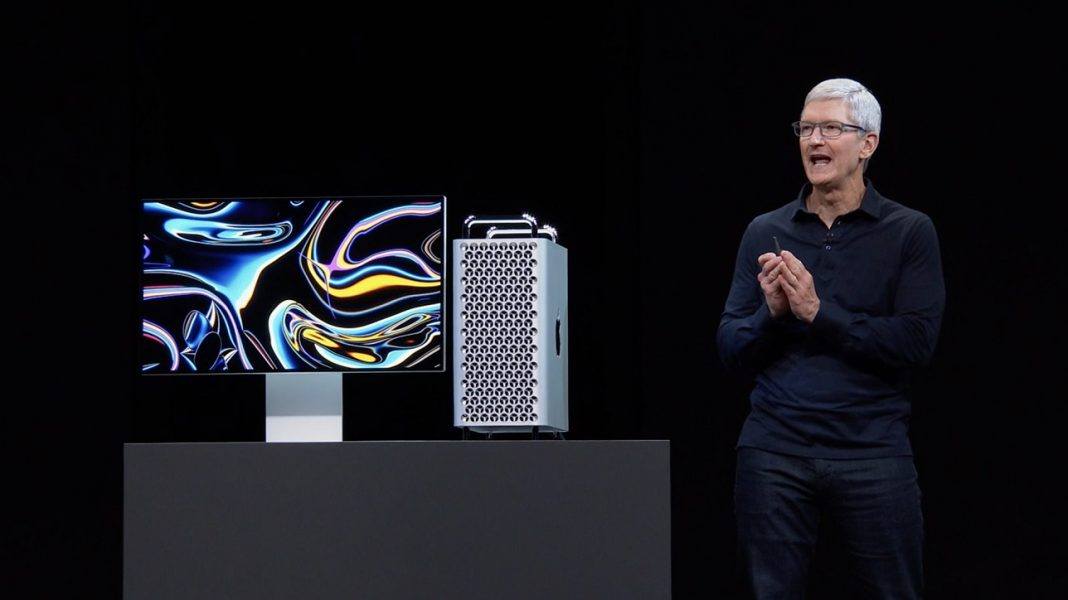 Gone are the days of Apple being able to sit back and watch the profits roll in from the iPhone. Sales have been falling so the company has been forced to diversity. Currently, they are pushing new software for Mac, iPhone, iPad along with presenting a new $6K Mac Pro.

Apple, beset by falling iPhone sales, announced upcoming changes to its phone and computer software intended to highlight its increasing emphasis on digital services and to further position it as a fierce guardian of personal privacy.

The revisions previewed Monday during a conference in San Jose, California, included a new feature that will let people log into apps and other services with an Apple ID instead of relying on similar sign-in options from Facebook and Google — two companies that mine data to sell advertising. Apple said it won’t collect tracking information about users from that service.

As part of that feature, Apple will also let users mask their true email addresses when signing into apps and services. That will involve faux email addresses that automatically forward to the user’s personal email. When the next version of the iPhone software comes out this fall, Apple is also promising to give people the option of limiting the time apps can follow their locations and prevent tracking through Bluetooth and Wi-Fi signals.

The revisions are part of Apple’s ongoing attempts to differentiate itself from other technology giants, many of whom offer free services in exchange for personal data such as whereabouts and personal interests, which in turn fuels the advertising that generates most of their revenue. Apple, by contrast, makes virtually all its money selling devices and services, making it easier for CEO Tim Cook to embrace “privacy is a fundamental human right” as one of the company’s battle cries in an age of increasingly intrusive technology.

Monday’s software showcase is an annual rite that Apple holds for thousands of programmers at the end of spring. This year, however, Apple is grappling with its biggest challenge since its visionary co-founder, Steve Jobs, died nearly eight years ago.

Although still popular, the iPhone is no longer reliably driving Apple’s profits the way it has for the past decade. Sales have fallen sharply for the past two quarters, and could suffer another blow if China’s government targets the iPhone in retaliation for the trade war being waged by the Trump Administration. Another potential problem looms for Apple. Regulatory complaints and a consumer lawsuit both question whether Apple has been abusing the power of its iPhone app store to thwart competition and gouge smaller technology companies that rely on it to attract users and sell their services.

Apple is trying to adapt by squeezing money from digital services tailored for the more than 900 million iPhones currently in use. The transition includes a Netflix-like video service that Apple teased in March and thrust to center stage again Monday with a preview of one of the new series due out this fall, “For All Mankind.”

But the iPhone remains Apple’s marquee attraction. The next version of its iPhone operating software, iOS 13, manages to offer both privacy features and an aesthetic “dark mode” for the screen — a feature already available on Macs.

Apple executives also claimed that iOS 13 will open apps faster and features a new version of the Face ID system will unlock your phone 30 percent faster. The software also will introduce more artificial intelligence to enable Apple’s digital assistant, Sir, to speak more like a human and, if so assigned, automatically tackle even more tasks, such as reading incoming messages out loud as Apple tries to catch up to the digital assistants made by Google and Amazon. Apple’s improvements in artificial intelligence also hatched a new photo-management tool that picks out the best photos taken on a certain day or in an entire month or year.

Apple Maps will get the biggest makeover of any of the company’s built-in apps. Beginning with iOS 13 the maps will include granular street and place data that Apple says it collected with street and aerial footage — tactics its largest mobile app rival Google has been using for years.

Apple also unveiled several new apps for its smartwatch, including independent apps that don’t rely on the iPhone in another sign of the company’s determination to lessen its dependence on that product. The App Store will be available on the watch, making it possible for people to find and download apps right on their watch — expanding the availability of purchases that generate commissions for Apple.

The iPad will also get its own operating system instead of piggybacking on the iPhone software as Apple tries to cater to consumers who would like the tablet to be able to do more of the things a laptop computer can do.

In its laptop and desktop businesses, Apple is breaking up its iTunes software for computers into three apps: Apple Music, Apple Podcasts and Apple TV. Apple debuted iTunes 16 years ago to sell and manage digital music for the iPod, which paved the way for the iPhone.

Apple has already de-emphasized iTunes on the iPhone and iPad, but now it will do the same on the Mac as well later this year. ITunes will still be available on Macs using older versions of the operating system, as well on all machines running on Microsoft’s Windows.

The federal government may be warming up its antitrust enforcement machine and pointing it at Big Tech.

On Monday, the House Judiciary Committee announced a sweeping antitrust probe of unspecified technology companies. In a statement, it promised “a top-to-bottom review of the market power held by giant tech platforms,” which would be the first such Congress has ever undertaken.

Earlier in the day, shares of Facebook, Google, Amazon and Apple dropped significantly after published reports suggested that federal authorities are preparing for investigations into anticompetitive behavior by several of these technology giants.

Facebook’s stock dropped 7.5%. Shares of Google parent Alphabet fell 6.1%. Amazon declined 4.6%. Apple, which has only been mentioned tangentially in these reports, fell 1%.

Some of the underlying developments appear to represent a divvying up of turf between the Department of Justice’s antitrust cops and the Federal Trade Commission, which also holds antitrust authority. The Justice Department would reportedly hold authority over Google and Apple, while the FTC would take point on investigations of Facebook and Amazon.

Over the weekend, multiple reports said the Justice Department was preparing a competition investigation into Google. On Monday, the Wall Street Journal cited unnamed sources to report that the FTC has secured the rights to bring a possible investigation into Facebook .

Investors may have reacted immediately to the uncertainty, but investigations — if any materialize — would take years.

“I think (the speculation) is becoming more real, but antitrust is not a 24-hour event,” said Blair Levin, a fellow with the Brookings Institution who formerly served as chief of staff to a Federal Communications Commission chairman.

It’s clear that the government is paying increasing attention to the actions of big tech companies, he said, but outcomes could take many different forms. Most likely, he said, could be regulation of the companies’ various practices, including privacy policies.

Pressure has been mounting on government to scrutinize the companies for some time, as backlash against tech companies’ reach and power grow in among consumers and politicians. The splitting up of jurisdictions between the FTC and DOJ could be simply a response to the pressure, said Sandeep Vaheesan, legal director for Open Markets Institute, which advocates against monopolies.

European authorities have covered ground U.S. regulators have barely considered — resulting in billions of dollars in fines for Google, and lesser fines for other companies.

That’s one model the U.S. could follow, Levin said. But political motivations and laws differ in the U.S., and regulations haven’t nearly caught up with the fast-moving world of the tech industry.

Vaheesan would like to see the government take aim at what Open Markets sees as market dominating practices by the big companies — partially by undoing large acquisitions that tech giants have made, including Facebook’s acquisition of Instagram and Google’s of YouTube.

But others think it’s unlikely the government would take such broad action.

“The problem with all this antitrust talk: the consumer isn’t being gouged,” said Michael Pachter, an analyst with Wedbush Securities.

Stocks are sinking because investors don’t like uncertainty, he said. But in this case, “the reaction vastly exceeds the potential harm to the company from a fine,” he said.