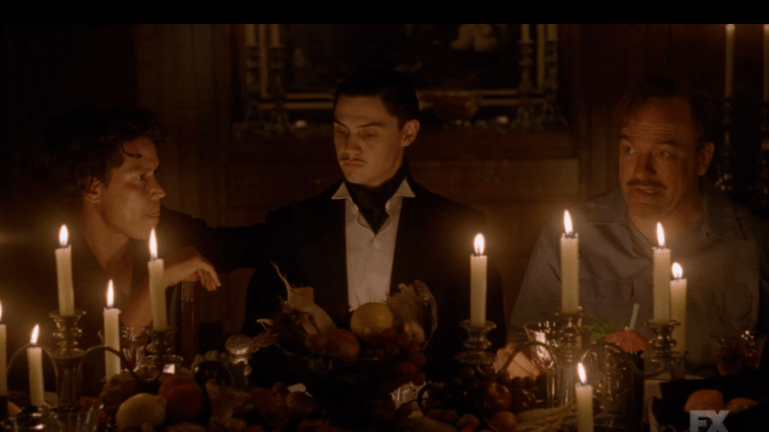 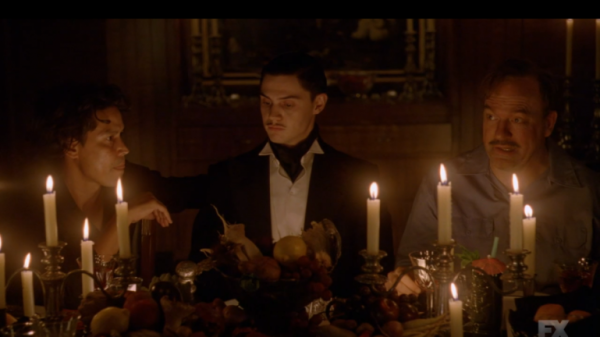 Things get even creepier on this episode of American Horror Story: Hotel as “Devil’s Night” dives deeper into the horrors of the hotel and those working in it. Additionally, it also continues the storyline of Detective Lowe’s missing son, Holden.

The episode begins with a man named Richard Ramirez, who is revealed to be a serial killer. He died back in 2013 and is now celebrating his third “Devil’s Night” at Hotel Cortez. Hotel worker Liz Taylor tells Richard “the master [Mr. March] has left a couple of treats on the pillow.” However, we soon find out that these “treats” are victims for Richard to torture and kill. A twisted tradition that Mr. March has been running at the hotel.

The mood shifts, as we see Detective Lowe talk to his daughter (Scarlett) on the phone. Scarlett tells her father she doesn’t want to go trick-or-treating and would rather stay in and bake with her grandmother. While on the phone, Lowe sees blood trickling down his hotel wall. Meanwhile, the deceased Ms. Evers is busy scrubbing away at a bloody sheet. However, the blood keeps reappearing.  She then has a flashback to her life. The flashback shows her dressing her son up for Halloween. Detective Lowe, who knocks on the door, interrupts her daydream. Ms. Evers reveals to Lowe that she lost her son on Halloween, and all they ever found was his ghost sheet (the one she is cleaning) he was dressed up in on Halloween. Lowe sympathizes with her, as he tells her about Holden.

Later on, we see Lowe’s wife Alex bringing home her son Holden, who has now become an immortal vampire thanks to The Countess. Being a doctor, Alex notices that something is off with Holden and decides to examine him. After taking his temperature, Holden asks his mother for a drink. Unfortunately, Alex is unaware of what him being “thirsty” really entails.

When Alex returns from the kitchen with a glass of juice, she sees Holden feeding on their family dog. In shock, Alex runs over to him, and Holden tells her he wants to go home to his “other mommy.” Quickly, she returns Holden to the hotel and follows him to the glass coffin he was in a few episodes back. Here, Alex is confronted by The Countess, who states, “You must have a lot of questions. I have answers.”

The Countess goes on to tell Alex that she had saved her son from neglect. She goes on to recount that she took ownership of Holden when his father (Detective Lowe) was busy with work and unable to give him proper care. Alex gets defensive and pulls out a gun on The Countess. However, just as this happens, The Countess’ lover Tristan Duffy walks in and knocks Alex to the ground. The Countess tells him to let her go, and Alex runs off.

Meanwhile, Detective John Lowe is at the hotel bar. He is joined by Aileen Wuornos (played by Lily Rave). Aileen explains that she has returned once again for the “Devil’s Night.” Aileen persuades John to join her in her hotel room, although bartender Liz Taylor warns him not to go. Just as they enter the room, Aileen knocks him over the head and ties him up to a chair. She welcomes him to “Devil’s Night.” John then busts his way out of the chair and handcuffs her to the sink. He finds her wallet and realizes he recognized her, as she is a well-known dead serial killer.

John runs down to the front desk, where he tells Liz Taylor to call the cops. Unfortunately, Taylor tells John not to bother because Aileen will not be in the room when he returns. Taylor then looks down on the guest list for the special “Devil’s Night” dinner party and realizes that he has an invitation addressed to Lowe.

John makes his way to the dinner party and is greeted by Aileen, who apologizes. He joins the other guests, as they welcome him as a new guest. Mr. March introduces himself to John. John points out that March is dead and, therefore, he cannot be him, but Mr. March tells him that in Hotel Cortez anything is possible. The other guests introduce themselves, and they are all serial killers as well. They begin discussing their crimes, as Mr. March explains the importance of hiding evidence.

Suddenly, one of the killers named John Wayne Gacy handcuffs Lowe to his chair, as his drinks start hitting him. While Lowe sits disoriented in the chair, he watches as the other murderous guest, Jeffrey Dahmer, feasts on a young victim brought in by March. Lowe wiggles his arm out and shoots Dahmer in an attempt to stop him from murdering the victim. However, Dahmer reminds him that they are all already dead.

Afterward, March is in dismay as he thought the detective would appreciate the dark, twisted evening. Meanwhile, Hypodermic Sally brings in a drugged-up victim she met outside the hotel, and the dinner guests proceed to brutally stab him.

Then John is seen screaming in the now empty dining room. Sally calms him down and tells him he is hallucinating.

Lastly, Alex is seen surrendering to The Countess. She tells her that she wants to be changed into an immortal like her son so that she can be with him forever.

You can catch next week’s episode of American Horror Story: Hotel on Wednesday, November 4 on FX.