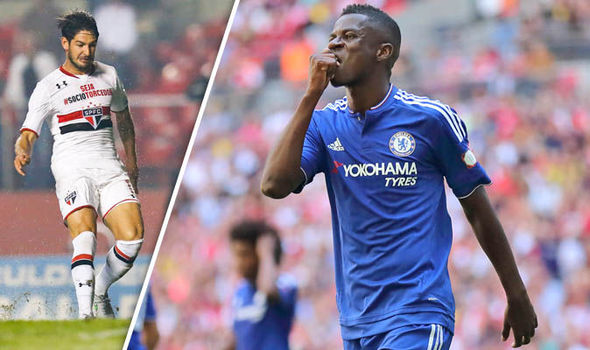 The Premier League champions are set to sign Alexandre Pato on loan from Corinthians. The former AC Milan striker will be Guus Hiddink’s first signing in his second spell with the Blues.

Pato’s arrival at Stamford Bridge will be a very low-risk affair for the West Londoners as his wages and time of stay are very less compared to other players at the club. The 26-year-old has already arrived in London for his medical following which he’ll put pen to paper.

The striker expressed his happiness and thanked the fans and supporters for the welcome on social media platforms. Pato told Sky Sports: “I’m so happy. I stay here for my dream. Chelsea is my new home. Thanks to Chelsea for support. Thanks to my fans for support on Instagram, Twitter and Facebook.

“I need to play. I don’t know what to say because I’m so happy. I’m very anxious [to play] and I want to know my new friends and players on the team. I really want to play in Chelsea.”

Pato was one of the main players for AC Milan in between 2007 and 2012. He netted 51 goals in 117 Serie A matches, but he suffered a lot due to injuries during his time in Italy. He returned to Brazil and joined the Corinthians in 2013, but his spell in his home nation didn’t work very well. He was loaned out to Sao Paolo for the 2014 – 2015 season, and he is still unwanted at his parent club.

Pato might prove to be a bargain for Chelsea as they look to climb upwards in the Premier League table after a disastrous first half of the season. John Terry and co. are currently 13th in the league table, but they are still involved in the Champions League and the FA Cup.

“[Pato] I am sure it will be very good for you my bro! Congrats [Chelsea].”

On a busy day of transfer activity at Stamford Bridge, Ramires left the club for Chinese club Jiangsu Suning in a £25 million deal. Ramires made 251 appearances for the Londoners and netted 34 goals. He also played a crucial role in the Chelsea side which won the Champions League under Roberto di Matteo in 2012. The Brazilian’s final outing in Chelsea colours came in the draw against Manchester United in December.

The United States international and New York Red Bulls defender Matt Miazga is also set to sign for Chelsea. The 20-year-old made a significant breakthrough in 2015, and he is now one of the regulars at the MLS outfit. The transfer fee is expected to be approximately $5 million, and it is understood that Miazga also owns a Polish passport so he won’t have to obtain a work permit. Miazga is already on his way to England and he will soon have a medical in London. The talented youngster made his international debut last November in a World Cup qualifier against St. Vincent and the Grenadines.