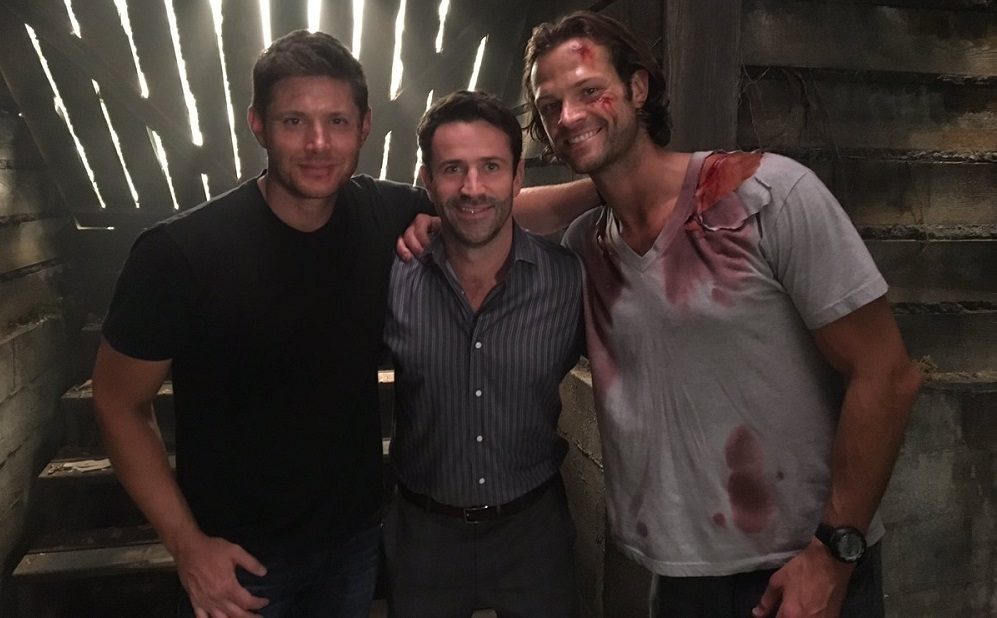 Fun fact about Adam Fergus – he’s Irish, and he’s got an accent to match. He also plays Mick, the mysterious Supernatural Man of Letters – English chapter – who comes to the States to reel in the leash of Lady Toni. Mick seems nice enough at first, but just like Sam, Dean and Cass, I don’t trust him …

How were you cast as Mick?

The process is normally fairly forward, except I think – I’m trying to remember – so many auditions in this city; I was definitely called on a Thursday evening, and it was a rush job. I’m not sure if they’d already been casting it but they wanted to see me for it on a Friday. So I went in and met producers on a Friday, I just remember it being a Friday for some reason.

I know the casting director quite well; I suppose it was just one of those things. Guest star in episodic TV comes up quite often, and you just go in and you do ‘em.

I do like playing cockney, and it’s something that I’ve played before, a character not quite the same as Mick, no one that had to deal with demons and devils like Mick has to but from the same neck of the woods, y’know.

Had you heard of Supernatural before you were cast?

I had indeed; I had a couple of friends that had been in the show; I worked with a girl, in a Canadian TV show called Being Erica. I worked with a girl by the name of Erin Karpluk who did an episode of it I think in Season 9. For the life of me, I can’t remember the character she was playing, but I did her tape. She was sending her tape up to Canadian casting, and she lives here in West Hollywood so of course, we’ve stayed friends over the years. We’d help each other out doing audition tapes, y’know, and reading the opposite lines, working the camera, that type of thing. So I had done her tape, and she got cast. So I was aware of it then.

(Erin was actually in two Supernatural episodes; she played Monica Holt in Salvation, in the first season, and Robin in Bad Boys, season nine. I think I will add her to my interview list – if you haven’t seen Being Erica, DO!)

I was aware of it when I did a show Roots for History Channel last year, and a really good buddy of mine Mark Rolston played Alastair on the show a few years back, and he was telling me about it and when I got cast he was delighted. Because so many people on the Supernatural show have worked from the very beginning, they’re all experts.  It’s amazing how the in-depth knowledge stuff one of the first ADs Kevin has on the show it’s really quite handy to have as well, because you can ask any question about the world that Supernatural is and how that might relate to you and someone will immediately be able to give you an answer.

Do you have any personal behind-the-scenes stories you can share?

It’s a really well-run set, really great people, from the top down. When you walk onto a set that’s been going for a good few years; normally, because the leads in the show, they’re good people. If you can imagine a show that’s been on for 12 years the amount of banter, as they say back home, that exists so working with Jared and Jensen, and Misha is really quite hilarious. They are constantly practical jokers, constantly messing … but so sharp that they get the work done on a very quick basis as well.

What was your favorite scene to film?

In general I like scenes where there’s a bit of dialog, a bit of back and forth dialog, there was a scene in the second episode with myself and two boys – and Misha, so the three boys – where we had quite a bit of dialogue, it was a bit talky scene, you know, you can have a proper conversation with other actors, it was quite fun to do.

I’m just about to go home and film a movie with Mel Gibson and Sean Penn called The Professor and the Madman. It’s a true story about the origin of the Oxford English Dictionary. It’s a really interesting story about a guy called James Murray who Mel Gibson plays and a guy called Chester Minor who Sean Penn plays and Chester is an American army surgeon from the Great War who is in a mental institution in the U.K. and James Murray is an academic who’s given the charge to come up with the very first Oxford Dictionary, and their paths cross weirdly, and they both end up being very instrumental in the creation process. Chester Minor, Sean Penn, is a very interesting guy and he had a brother, well several half-brothers and sisters, but I play one of his brothers Alfred Minor who comes into the movie as well. That’s one project.

I’m also working on a movie about a Canadian woman called Mary Pickford, who was the first female star of Hollywood, I suppose; she started United Artists and together with Charlie Chaplin, and her second husband Douglas Fairbanks. She was one of the first women to win an Oscar for best actress and kind of made the transition from silent movies into the talkies back in the 20s. Her first husband was an Irish guy called Owen Moore who was also a silent movie star who she married at a very early age and they had this kind of very high octane and quite visceral relationship, I suppose. So I play him in a movie called The First, which shoots here, in LA in December.