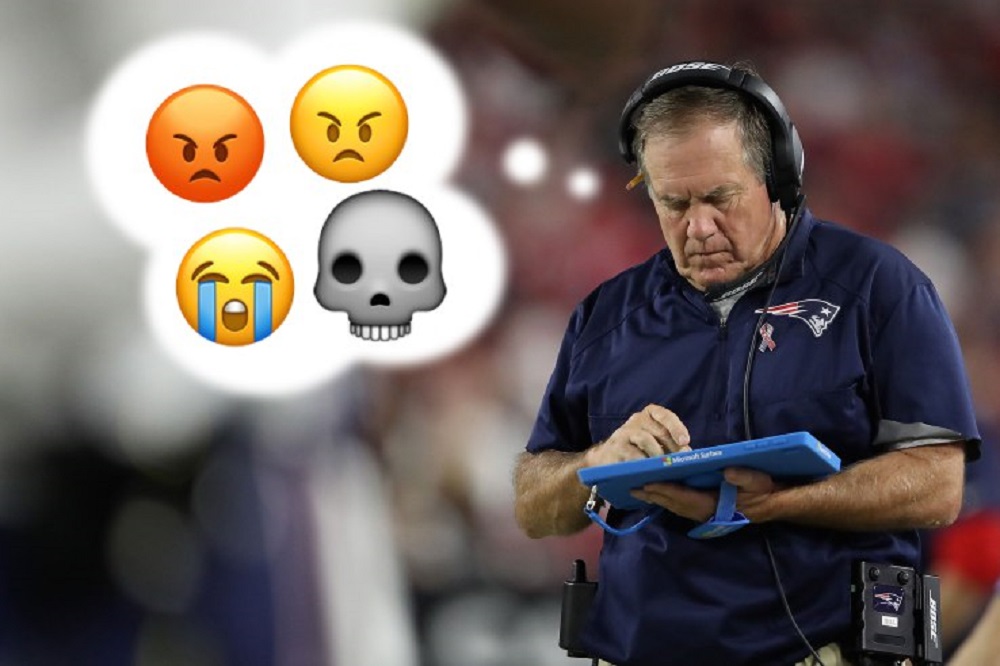 First your Samsung Galaxy Note 7 could catch on fire in your hand, now technology can’t even be trusted on the football field.

When the NFL entered into a deal with Microsoft to put Surface Tablets in the hands of coaches on the sideline, it was heralded as a step forward. Since then, problems have continued to surface. Get it? Surface Tablets…Sorry, I’ll stop.

“As you probably noticed, I’m done with the tablets,” said Belichick. “They’re just too undependable for me. I’m going to stick with pictures, which several of our other coaches do, as well, because there just isn’t enough consistency in the performance of the tablets. I just can’t take it anymore.”

Here's Belichick's full answer as to why he hates the tablets. Lasted five minutes and 25 seconds. pic.twitter.com/wcSqebtQRu

Belichick continued on this rant for about five minutes. FIVE MINUTES. Reporters are usually lucky to get five words from Bill.

“For me, personally, it’s a personal decision, I’m done with the tablets,” continued Belichick. “I’ll use the paper picture from here on because I just have given it my best shot. I’ve tried to work through the process. But it just doesn’t work for me, and that’s because there’s no consistency to it.”

Microsoft, who paid $400 million to become the “Official Tablet of the NFL” defended its product.

“We respect Coach Belichick’s decision but stand behind the reliability of Surface,” said the tech giant in a statement. “We continue to receive positive feedback on having Surface devices on the sidelines from coaches, players, and team personnel across the league. In the instances where sideline issues are reported in NFL games, we work closely with the NFL to quickly address and resolve.”

The NFL also jumped in to defend its buddy.

“Since Microsoft has been a partner of the NFL and implemented their technology on our sidelines, the efficiency and speed of communication between coaches has greatly increased,” said the league in a statement.

Honestly, I feel bad for Microsoft here. Imagine paying $400 million just to have Belichick crap on your product.

The NFL issued the following statement regarding Surface tablets:

“Microsoft is an integral, strategic partner of the NFL and implementing their technology on our sidelines has increased the efficiency and speed of collaboration between coaches and players to an all-time high. Within our complex environment, many factors can affect the performance of a particular technology either related to or outside of our partner’s solutions. We continue to work with all of our partners to ensure the best systems are in place to most effectively assist the clubs in the execution of their game plan.” – NFL

“We respect Coach Belichick’s decision, but stand behind the reliability of Surface. We continue to receive positive feedback on having Surface devices on the sidelines from coaches, players and team personnel across the league. In the instances where sideline issues are reported in NFL games, we work closely with the NFL to quickly address and resolve.” – Microsoft