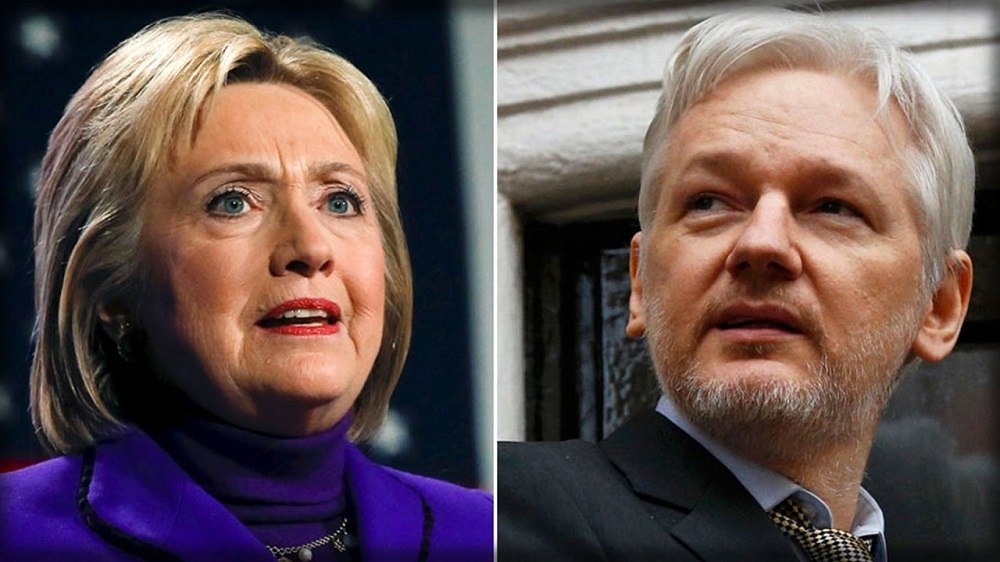 Julian Assange loves media attention, and it didn’t take long before he did an interview trying to refute claims that his Hillary Clinton emails were from the Russian government.

He’s already let it be known that he would love for these leaks to disrupt the US Presidential election and having Donald Trump in office would seem to make him happy. Or maybe it’s just he’s hoping to show that WikiLeaks has so much power that it can push whom it wants into the White House.

WikiLeaks founder Julian Assange has launched an astonishing attack on Hillary Clinton in an interview carried on the Kremlin’s own television channel.

The Australian-born activist told RT, formerly Russia Today: ‘I actually feel quite sorry for Hillary Clinton as a person, because I see someone who is eaten alive by their ambitions, tormented literally to the point where they become sick – for example faint – as a result of going on, and going with their ambitions.’

He was referring to her collapse at a 9/11 memorial in New York in September, which was attributed to a mild bout of pneumonia.

In separate statements from WikiLeaks and in an interview with a television network supported by the Russian government (above), Assange dismissed warnings that Russia was the main actor behind cyberintrusions on Podesta and other politically connected individuals and organizations.

The WikiLeaks founder offered no evidence to support his denials in the face of U.S. government statements that American intelligence agencies have concluded that Russia was behind the hacking campaigns of Democratic entities in the U.S. Those breaches have raised alarms of potential intrusions on election day.

WikiLeaks’ “sources for the Podesta emails currently being published are not state parties,” Assange said in a statement. He also told the RT network that warnings from Clinton and her campaign that Russia was behind the hacking of Podesta’s Gmail account were “false.”

“Hillary Clinton has stated multiple times, falsely, that 17 U.S. intelligence agencies had assessed that Russia was the source of our publications,” Assange told the RT network, also known as Russia Today. “That’s false – we can say that the Russian government is not the source.” Russian officials have also denied any role.

“Only Russia’s senior-most officials could have authorized these activities,” Director of National Intelligence James Clapper said in October. Clapper did not specifically name Russian President Vladimir Putin or other Russian officials, but U.S. cybersecurity experts concluded that hacking groups affiliated with Russian government and military intelligence services had roles in the breach of the Democratic National Committee.

Assange was granted asylum by Ecuador and lives in its embassy in London. He fled there in 2012 after Sweden pressed a warrant for his arrest on a sexual assault allegation.

Media organizations have reported on each new daily WikiLeaks release of Podesta’s emails in recent weeks. Clinton campaign officials have declined to discuss the emails, questioning whether some of the material might be doctored.

-In a March 2015 hacked email, Hillary Clinton told her top foreign policy adviser last year that Prime Minister Benjamin Netanyahu of Israel had created “an opening that should be exploited” after Netanyahu was forced to apologize for making remarks about Israeli Arabs that were condemned as racist.

Clinton made the comment to adviser Jake Sullivan, who emailed a link to a New York Times story detailing the controversy in Israel over Netanyahu’s remarks and a fight between him and the Obama administration over remarks promising that no Palestinian state would ever be established on his watch.

-In a hacked email from September 2015, Clinton communications director Jennifer Palmieri told Podesta that Clinton would have to make herself more available to reporters if Vice President Joe Biden entered the presidential race.

“But if Biden gets in – we are going to have to make time for her to do more press,” Palmieri wrote. “He will do a ton of it., It is free and he doesn’t have to travel anywhere to do. So I am thinking about a post-Biden press outreach plan, too.”

-In a hacked email chain from last February, Clinton’s campaign staff discussed whether to respond on the day the nation learned Supreme Court Justice Antonin Scalia had died.

“I am having a hard time imagining what she would say,” Palmieri said. “In a day or two it could be appropriate to talk about SCOTUS stakes, but seems off for tonight.”

Assange set up WikiLeaks in 2006, but he was viewed by many right-wing Americans as a threat to national security after the organization published thousands of leaked U.S. diplomatic cables which gave embarrassing details about what Washington thought of various politicians and world leaders.

The cables were published in the New York Times and several other newspapers around the world.

But this year WikiLeaks has gone from being a darling of the Left to a thorn in the side of Clinton and the Democratic establishment.