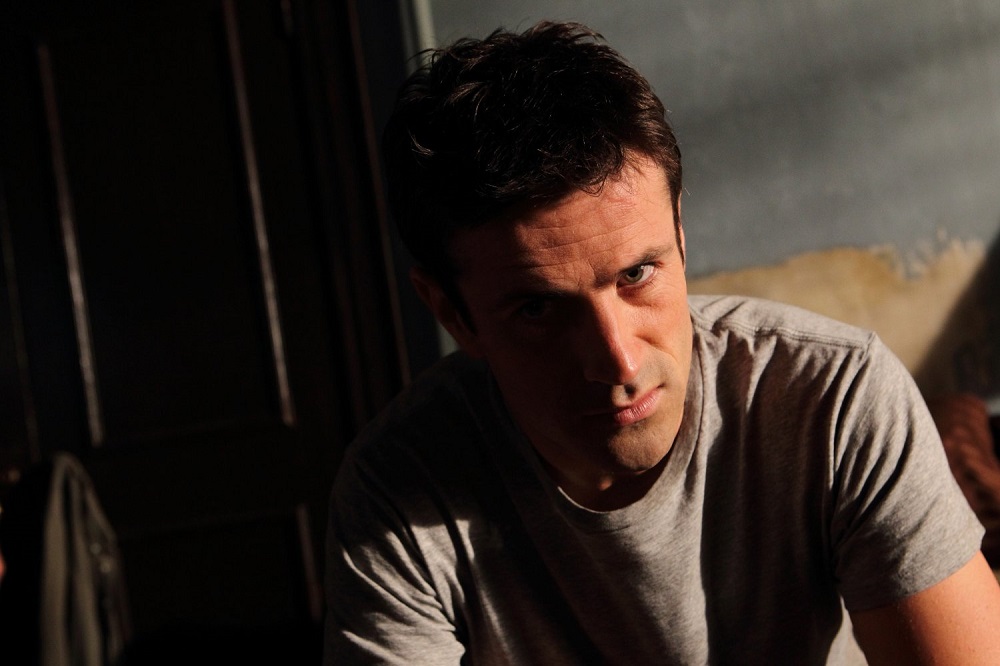 You can check out my other interview with Adam here. The fact that he’s friends with another of our favorite interviews Brandon Jay McLaren is another big plus for him. 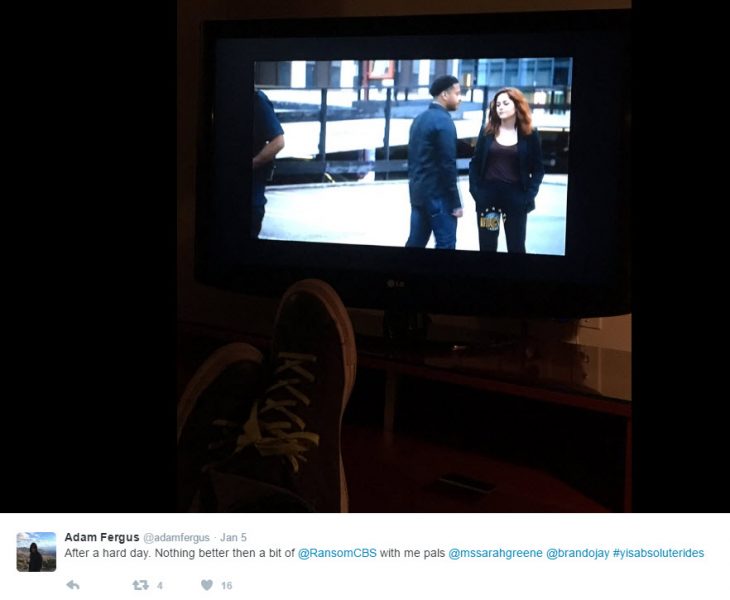 How have you been enjoying the British Men of Letters?

I have been loving the British Men of Letters … especially Mr. Ketch, my God he’s hilarious!

And I love the fact that the Men of Letters is so into technology, yet you type everything on this really old-fashioned typewriter.

Oh! It’s magic? (I must preface the remainder of this conversation that my PVR was not working properly for the Supernatural episode, and of course, that’s the reason why I didn’t realize that the typewriter was magic …)

Well, it’s magic in the sense that when I type the reporting and then I sit back in the chair in First Blood, and then it starts typing it means it’s found a secure line. And so I can communicate with the BMOL, the British Men of Letters, back in the U.K. That’s what I’m doing in those instances, whenever you see me on that typewriter; it’s kind of “magic” – that’s one way to put it. It’s basically my communication device with the British Men of Letters.

Now is that something that’s known?

It’s in episode nine, when I do that…. At the very beginning when I’m typing – and then it magically starts typing on its own, that’s them responding.

Ahh, I did not notice that. (I’m still blaming my satellite feed.)

Well, I’m glad for once I know something more than one of the fans of the show.  That was one of my favourite scenes to shoot as well. 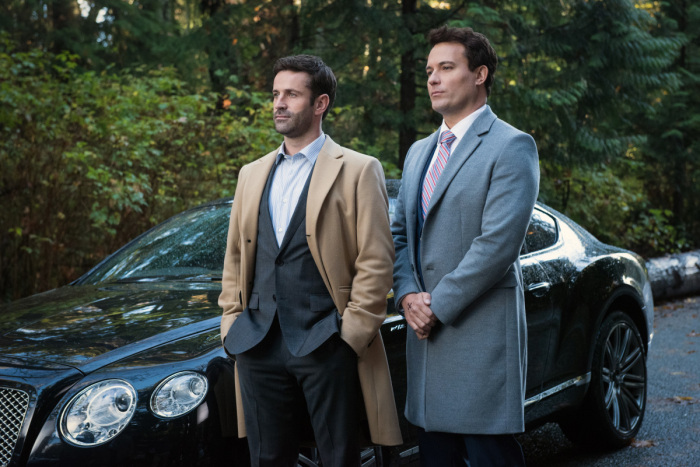 What was your favourite scene to film for Fresh Blood?

Well that was, in one of the ways, that was my favourite scene because I like the technical side of the filmmaking, and it was enjoyable to see how VFX were on point and how they were setting up the shot and then watching it back … you have an idea on how it’s going to work and then you see it with everyone else’s professional touch on it. It’s impressive. Plus, to be perfectly honest, as I said to you last time we were chatting, I love scenes with dialogue. I love interacting with other actors on the set and in scenes … the scene with myself and Dave and Misha and Sam at the cars, that was enjoyable. That was a great scene to shoot because it was dialogue heavy and it made sense … we’re trying to be appealing to the American hunters and work with them in that scene, so it was nice to try and convince them of that.

Since I last talked to you, have you experienced any other behind-the-scenes sort of thing that you’d want to share? That you can share?

Behind-the-scenes … Let me think about it. Is there anything that has happened. Look, to be honest with you, it’s just … I’ve been in a lot of TV and film over the years, and I’ve never worked on anything that’s so well-run, and also much fun to work on as well. Like, the guys … every day is just a fun day. There are people on the show that have been on the show since the very beginning. People just get bored, they don’t have the same variety of day as we actors do and the writers might do and the directors might do. The crew, for a lot of it, is the same from episode to episode, so it’s hard to keep people’s interest. The only way you do that is by having really, really good guys. I’ve gotten to know the guys really well and they’re such nice people. Jared and Jensen are just two of the nicest fellas I’ve ever worked with … unfortunately I haven’t worked as much with Misha but he was quite fun in that episode, in episode nine … I just had so much fun with him and everybody. Certain people who have been on the show before like Sam, that are back now, it’s a really well-oiled machine, a disciplined set, but it’s just so much fun. Everything moves very fast, because everyone is enjoying what they’re doing, so it’s no ego – it’s just … I can’t stress how enjoyable it is to work there. Behind-the-scenes, I’m trying to think of an anecdote for you … something will come to me; maybe we’ll come back to that if I think of one. 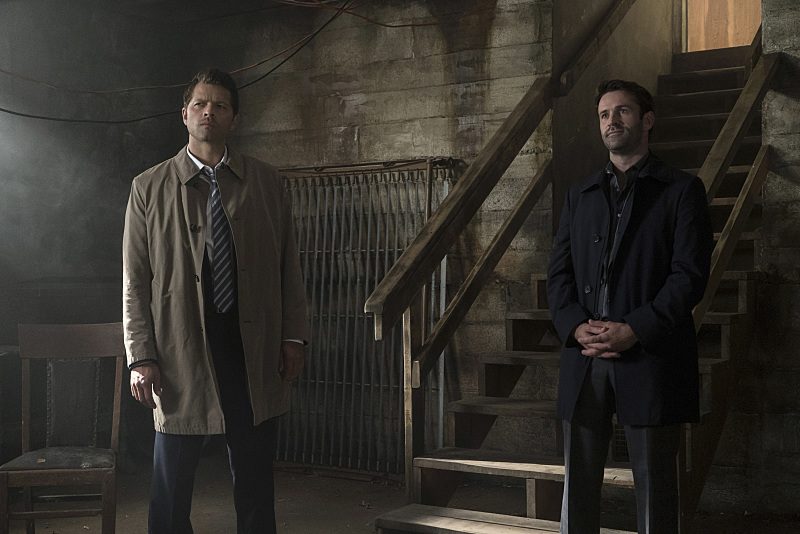 How much control does Mick have over Mr. Ketch?

Ketch, although he answers to me, in certain way shape or form, it’s like having a pitbull on a leash with a dodgy lead. I have that much control over him that if he wanted to bolt, I couldn’t stop him. He’d either pull the leash out of my hands, or the leash would snap and Ketch would be gone. So you’ve got to manage him as well as you can – I can’t demand that he do X, Y or Z, you kind of have to be careful with Ketch because he’s … I have the illusion of control, let’s put it that way. But if he wanted to bolt, I wouldn’t be able to stop him.

What does Mick hope to accomplish with convincing Mary there is another way?

Wow. Mick is just very confident of the ability and the attitude that the British Men of Letters have. Initially, when we meet him at first, he’s kind of more enamored with the American hunters than Ketch might be at the beginning. You see in episode nine when Ketch is like … “You left people alive? Why are you doing that for? How unprofessional.” Ketch can’t understand that kind of thing so … Mick considers himself to be kind of the tactician, as he says in the episode, he likes to get people on board, on his side, and he can be quite political rather than the muscle of the scenario … be confident to able to convince people of his way of doing things … there’s nothing really more than that with Mary, he’s not trying to manipulate Mary … he’s more trying to convince her that what he’s doing is correct. What he said in that scene, let’s see if I can remember the dialogue … Let me tell you about a world without monsters or demons, or any of those other buggers that go bump in the night … like, I can make this happen, I am confident that I can make this happen. He just hopes that he can appeal to her maybe maternal side, or her feminine side … in the sense that she’d be more agreeable to, “Let’s fix this problem permanently.” Rather than constantly killing demons.

Have you had any interaction with Supernatural fans and what do you think of them?

They’re amazing. I’ve never experienced fans with the same level of knowledge that Supernatural fans have. The level of dedication. Someone was telling me a story of a mother who used to watch this when it first came out … her daughter must have been six or seven or something, and now her and her daughter watch the show all the time. And her daughter’s now, 12 years later, it’s amazing how it’s transcended different barriers and different demographics and all that kind of thing. They’ve got a very wide reach … I talk to people as much as I can on Twitter … I’m getting better at the ‘ol Twitter since I started this show. Because fans take a genuine interest in your character … and they don’t suffer fools gladly, either. They’re rightly questioning Mick and Mr. Ketch’s roles in the show and what they’re at – they’re very untrustworthy, probably for proper reasons to go back to characters that have come and gone in the past. The writing is just so good that people are like … one minute you’d look at Mick, and think Mick is a really good guy, and the next thing he and Mr. Ketch do something and you’re like, hold on a minute … The writers do a great job of bringing you on that roller coaster, so the fans aren’t as trusting as a result. The compliments and the kind words that people have said on Twitter and various social media have been great. Any interactions that I’ve had, they’ve been fantastic.