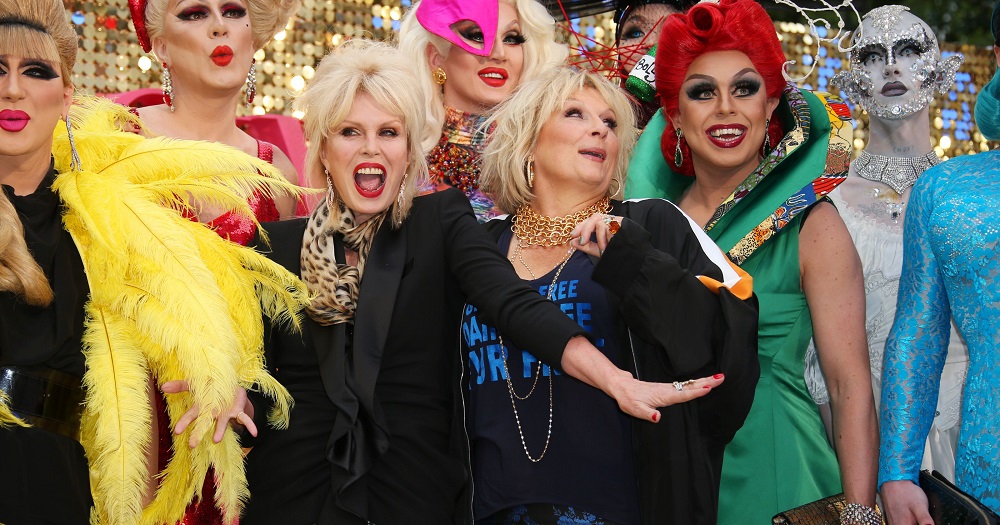 Fabulous, also known as AbFab, is a story that has taken on many forms. Originally airing on BBC from 1992 to 1995, its success and popularity amongst viewers later lead to its revival in both 2001 and 2011 (for its 20th anniversary).  Ranked as one of TVGuide’s “Top Cult Shows Ever,” AbFab is once again returning to the screen – the big screen to be exact.

The original series featured actress Jennifer Saunder as Edina Monsoon, who was a PR agent with an apparent liking for alcohol and drugs. In an attempt to fit in with the modern crowd, Edina was constantly chasing and trying out new fads. The series also centered around magazine editor Patsy Stone (played by Joanna Lumley), who was Edina’s best friend and also enjoyed more than her fair share of alcoholic beverages and unfavorable substances. Due to both her own and her best friend Patsy’s reckless lifestyles, Edina often found herself relying on her young adult daughter Saffron, who unenthusiastically found herself constantly tending to the needs of her twice-divorced mother.

Pretty much all of the actors from the original series are returning to reprise their roles. However, the film will also include an abundance of celebrity cameos, including Bridesmaids star Rebel Wilson. In an interview with Britain’s Daily Mirror, Rebel expressed her excitement regarding the project. She explained, “I’m a huge Absolutely Fabulous fan. [Lead actress and writer] Jennifer Saunders was one of the first women I saw on screenwriting and performing her own material, and I got to meet her last year in London, and I cried when I met her. She’s every bit as amazing as I thought.” Later on, she told the magazine that her Bridesmaids co-star Matt Lucas told her that Saunders had another Ab Fab project in the works. Rebel recounted, “Matt told me Jennifer Saunders was writing an Ab Fab movie and knew I was a big fan of hers and sent me her email address. I emailed her and said, ‘If you need me for anything I’ll be there.’” Subsequently, Jennifer took Rebel up on her offer and got her to come out for a few days of shooting. In addition, Jennifer also enlisted several other A-listers, including Kim Kardashian, Kate Moss and Cara Delevingne.

The first trailer that has been released for the movie plays more like a cheesy commercial for a mixed alcoholic beverage than a feature film. The two main ladies are seen zooming around in a speedboat, walking along a sunny beach, and thoroughly enjoying drinks and the company of two men. Other than their lavish lifestyle, the trailer doesn’t really give viewers too many details on what to expect from the soon-to-be-released flick. Over the top of the short clip, the narrator states, “when you must have the best, be sure to choose something cool, something refreshing, something…absolutely fabulous.”

An early synopsis for the film explains that both Edina and Patsy have continued to enjoy their luxurious lifestyles, as they indulge in shopping, drinking and partying at the trendiest hot spots. However, they end up being blamed for a major incident at a fashion launch party and become the focal point of a media firestorm. The overwhelming paparazzi trigger the two ladies to escape off to the French Riviera, where they have to devise a plan to climb the social ranks and reclaim the enviable lifestyle that they wish to lead once again.

Looking in as someone not all too familiar with the series, I have to say I am looking forward to seeing further promotional clips so that I can get a better picture of what the story and characters are all about. However, the movie has managed to get some of the biggest names in Hollywood and has evidently been successful enough to earn itself several resurrections, which leads me to believe that there is something worth checking out here. Nonetheless, I will be waiting for further trailers to be released so I can get a true read on the film.

Moreover, the latest Absolutely Fabulous movie is hitting theaters on Friday aka today.