Trevor Noah is bae. The Jon Stewart successor to The Daily Show showed just how capable he is this week when he made right-wing zealot and Sean Hannity puppet Tomi Lahren look like the biased, uninformed crazy woman that she is. Her appearance on the popular Comedy Central show revealed what I’ve know about the conservative commentator all along- she can’t stand on her own.

If you have ever watched her program, then you know that Lahren’s brand of commentary involves speaking loudly about things that she does not understand, but has to talk about because that’s what she’s paid to do. She comes off confident, proud and knowledgeable, but her stint on The Daily Show proved that she is nothing without her team at TheBlaze. Furthermore, it goes to show just how weak of an argument right-wingers and conservatives have about Black Lives Matter, Hillary Clinton and the legitimacy of Donald Trump as president. She gets it all the way wrong.

Noah remained calm as he took her to task about many of the things she has said on her show. What we saw in her responses, pitiful as they were, was a young girl taking on a real pro without the direction of the people who put her in place. Noah stumped her on the simplest of questions. When he asked specifically about certain comments she’s made, she stammered her answers because, ya know, that’s what happens when you have to shoot quick retorts from the hip on topics where the answers are usually provided for you.

The thing about this woman is that she sees herself as a hero to the people. Lahren thinks that she is some godsend that stands as a voice for “The segment of this country between the coasts that is largely ignored.” She puts herself and her supporters in the position of the victim and her “calling it like it is” is simply a tool by which she can draw attention to the real problems happening in America. It sounds harrowing and empowering even, but when you take away the bullshit and peel back the layers of hypocrisy you see that it’s just propaganda. It’s pieces of a white dream that she has been made the face of because she’s young and blonde and pretty. Tomi Lahren is a fraud, and it was oh so clear when she couldn’t coherently defend her own statements.

When you stop and think about her reasoning, again to be a voice of those who have been “Labeled into silence,” you can see the regurgitation of the rhetoric her handlers have made her memorize and repeat. If she thinks that people in the Midwest, the ones that she mentions several times as forgotten, haven’t exercised their voices, then she is sorely mistaken. Her analysis that Trump won them over because they felt he represented them is correct, but not for the reasons she gave. As Noah pointed out after she made that statement, the people who voted for him are not afraid nor without a voice, they are encouraged because they have someone who finally, openly cosigns their bigotry and they don’t have to keep quiet about it anymore.

When it comes down to it, Tomi Lahren is a spinner. She takes the content of stories, situations and ideas and spins them to fit the context of the narrative she wants to tell. It’s a tactic that extremist right winged conservatives use all the time, and they convince themselves that what they believe is what’s right for all. They are bullies that don’t know how to play nice because they just don’t want to. Ultimately, they are full of hot air, which Lahren proved when Noah bodied her on his show. By the way, it didn’t take much for him to do that. Usually, when a person coasts off the reactions to their thin arguments, there is no way for them to come remotely close to making sense when someone calls them out on their shit. Trevor Noah called Tomi Lahren out on her shit. 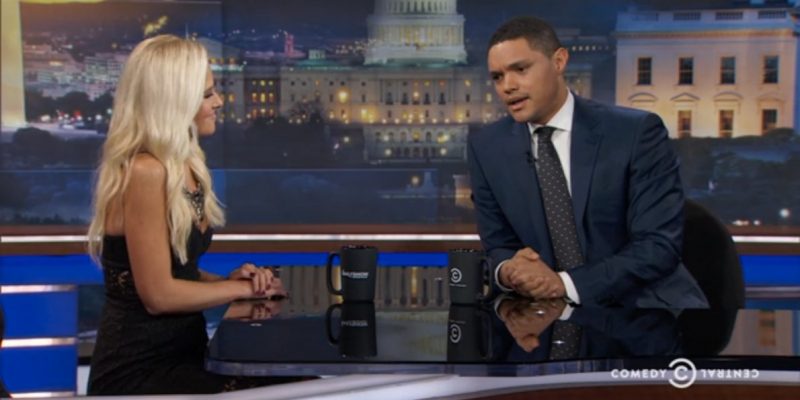 This interview revealed a lot of things about the right, but the delusion of conservatives is the most disheartening. There is no bend with these people. As a former Republican and die-hard conservative, I know this to be true. White conservatives see this moment in American history as their chance to reclaim all the things that they feel have been stolen from them. Any time members of a society, who feel disenfranchised by a system set up in their favor, finally gets the power back into their hands, the needs of everyone else is an afterthought. That’s what’s happening now, and that’s what will continue to happen.

The voice that Lahren claims she has is nothing new. The good ole boys at the top have just repacked their superior ideals in the form of a 24-year-old millennial woman who is happy to get the fame, money and influence that comes along with having a platform. But you can only hide foolishness behind pretty for so long.